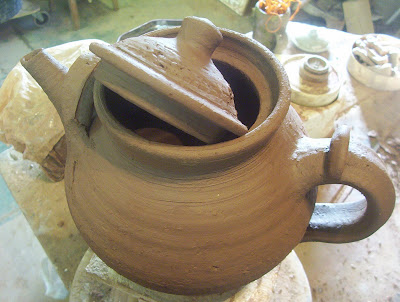 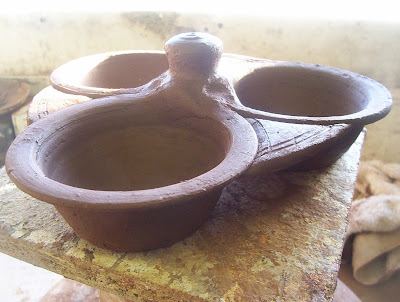 Ron asked about what my teapot lids look like below the flange, so here's a picture showing what goes on.

I got bitten on the leg this morning by a sheepdog in the lane outside the workshop, which wasn't the best start to the day. In fact it made me feel a bit odd for a while and it bled a bit too. I think the farmer's taken the dog for a tetanus.
As Matt pointed out to me this afternoon on the phone, I can run away to the countryside and hide away from all the perils of the city, but the countryside's just as dangerous. It was good to hear from him by phone. We were making plans because he's coming down next week at some stage and is probably going to come and help me at Clay Art Wales in May.

I made four of these conjoined bowl pots today. They're based on an old Staffordhire design, Clive makes a version too. I'm sure the folks of Stoke on Trent probably would have used these in the seventeenth century for serving ye olde mango chutney.

Off to the gig shortly, shame my best disco dancing leg won't work properly due to the dog bite, the other leg's rubbish - no sense of rhythm.
Posted by doug Fitch at 18:08

Hi Doug, Sorry to hear about that damn dog. But nice pots. The clay color looks a lot like mine, but chunkier. I should delve into your web site to find out more about your lovely materials, but thought I would ask instead. Are you getting your clay nearby. There is a growing return to local materials here in the states. I'm using clay that I dug out of my field near the kiln. It's a bit short, but a pleasure top use. I've enjoyed your blog. Thanks again.

Hi Michael
Good to hear from you, I've been enjoying your blog too - lovely pots, really lovely. I came to you via Ron a few weeks ago.
I used to use clay from the Fremington clay pit which is about thirty miles from here, blended with a brick clay from Exeter, about ten miles away. Unfortunately the Fremington pit closed last year so now I use the Exeter clay blended with a red clay from Stoke. Now the Exeter pit has closed too, but I have a small stockpile that will last a few months. I need to find another local brickworks - and soon!
I'd love to dig and process my own clay, that's a dream for a few years time, but I hope to do it.
Great to hear from you Best wishes
Doug

Thanks for the lid shot.
How's the leg? That's pretty awful. You weren't threating the sheep were you? Looks like you and Luke are adding to his collection of pictures with cool bands/singers. None can top that Johnny Rotten photo though.
I'm enjoying the McGarva book. Learning some details I'd not known of.

The dog must have been starving, theres no meat on you!!!

Maybe the dog day was due to funny stuff happening with the stars too. I don't pretend to understand it but heck if I can use it to explain away some very duff days then that's fine by me.