David A Smith - Sign Artist from Danny Cooke on Vimeo.

Hello all.
Well I haven't made any pots for ages, but I've done lots of work on the building. I have Westcountry Potters Association coming for a day in a few weeks time and I'm determined to have the place sorted out by then. 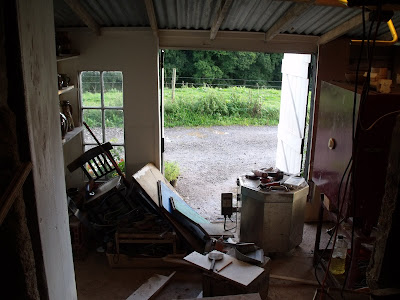 This is the showroom/kilnshed in a state of transition. 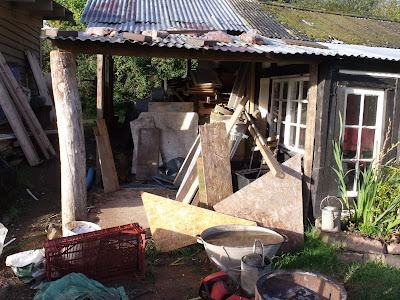 The woodshed, half finished and chaotic 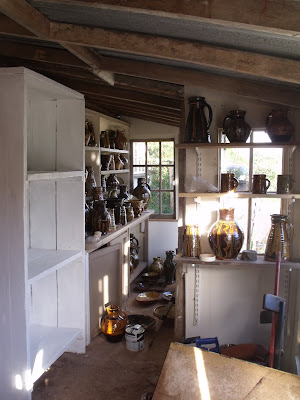 The showroom. I reckon I'll have it finished in the next few days. 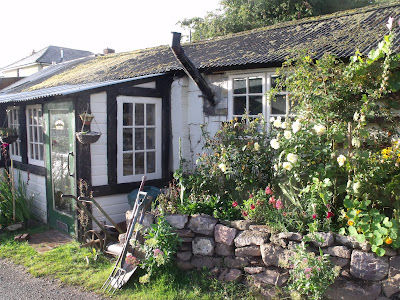 The garden looking pretty in the autumn sunshine. 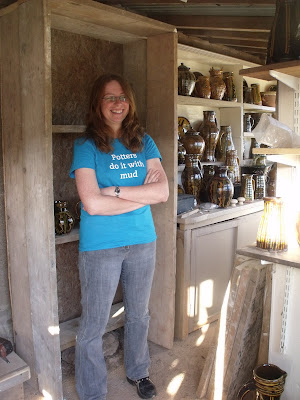 And prettier still, a visitor from Scotland. Hannah came for a couple of days earlier in the week. It was good to see her. We're going to be going to the States in the spring where we'll be doing a number of workshops, so we spent our time making some basic plans for that little excursion - more about that at a later date. I sent pots out to the States this week for the Clay and Blogs show.
Well a rubbish and brief attempt at a blog post, but it's better than nothing I guess. Just got back from the pub, trying to track down my wood supplier, but he wasn't there, so had to stay for a couple of ciders just in case he came in.

Can't wait to have wet soggy pots to show you, won't be long.

Happy weekends all.
Posted by doug Fitch at 22:19 8 comments:

I took the afternoon off today to go to a farm sale, of old machinery and farmhouse items, near the barn where we Love Daddies rehearse. 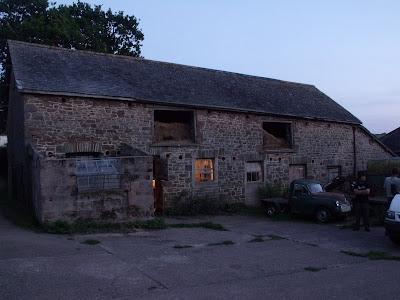 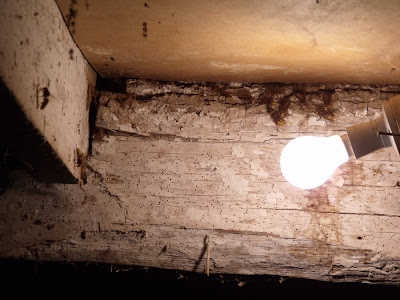 And hornets that cut short last week's rehearsal - it started with a few, then suddenly loads - so we legged it of course.

Anyway, back to today. It felt rather sad, picking over the affairs of a deceased old farmer in a decaying house, but that's life and death, as the old addage goes, you can't take it with you. The house was fascinating and still had its original 19th century wallpaper. It was packed full of the evidence of a lifestyle from a bygone age, the old guy had been a hoarder. There were old horsedrawn carts in the field, rotted and full of woodworm, rusty ploughs, tractors and in the house, books, iron beds, boxes of cutlery, etc. etc. etc.

There were a few old 19th Century country pots, a salter, which is a huge oval shaped earthenware trough, glazed only internally, with galena. It would have been used for preserving hams in days of old. Also a great scalding pan for making clotted cream, a local speciality. I already own examples of such pots, but nevertheless, I was almost tempted to have a bid. But I have little room to store any more of them, so I left them for somebody else to buy, even though they each sold for just £20, cheap for a bit of history. 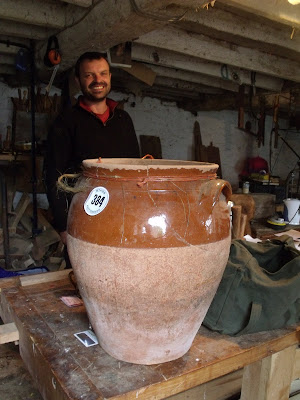 So I waited for this lot, in the hope that I may be able to afford it. I couldn't believe it, nobody else even bothered to bid, so I was able to buy this huge crock for just a fiver, hurrah!. Ok, it's broken and tied together with baler twine, but that doesn't worry me, abit of glue would sort it out, but I'll probably just leave the twine on instead. This is just the sort of old country pot that gets saddos like me me excited. In fact, simple country pottery is my favourite type of pottery and this one will live with the other inspirational pieces that I keep in the workshop.

The skills of the guys who made these things, was phenomenal, I guess they did it all day, every day, executed with absolute economy in terms of the use of both time and materials, thrown skillfully with minimal moves and to the optimum thickness, without excess or waste. These wares are the focus of the show, Honest Pots, that I spoke of in yesterday's post, I'll rattle on a lot more about that show as time goes on.

In the picture by the way, is my friend and fellow Love Daddy, Cookie. This picture was taken in his workshop just before we came home this evening. It's his birthday today, although he doesn't know that I know(I haven't been able to mention it all day) and his wife has invited a few of us around for a surprise tea this evening, ha ha! He has a wonderful blog, right here, which he thinks nobody visits, so please take a look at his amazing wood, art and words and leave him a birthday greeting, he'll love it.


Back to the country pots. For those of you who haven't seen this film before, here's the first installment of Isaac Button, Country Potter for you to enjoy - the rest of it is also on Youtube. There's no soundtrack, so don't start to mess with your volume controls. I've heard it said that sadly Isaac passed away before the film makers had a chance to return and record the soundtrack. It is an invaluable historical documentation of a master craftsman at work.

Well this is the story of the last few days of hectic craziness. I've got very behind with this blog and the further behind I get, the harder it gets to catch up, so please excuse this if it's a bit of a ramble, at least it will get me up to date. 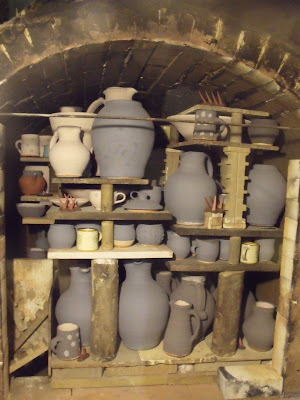 Here's the pack on Tuesday night 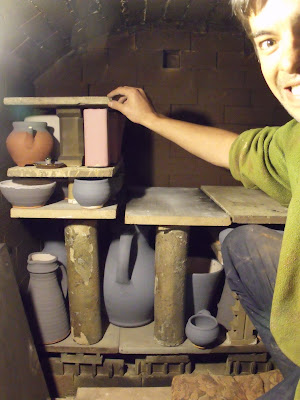 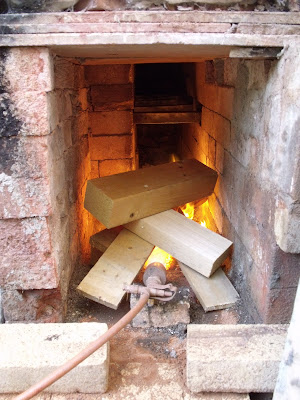 Firebox 1, lit with the gas burner at 8.30 am Wednesday morning 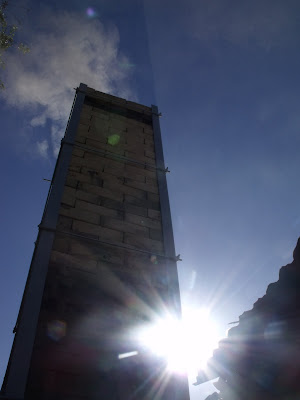 The new chimney was fantastic 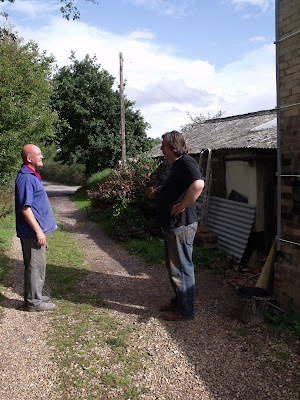 Blogger Paul called by. It's always good to see Paul. he kindly brought me a mug which I've been enjoying using ever since. Marky Mark came up after work and Tilly, Debbie and Clarkey all did their bit. The firing finished at 12.30 am. We were exhausted, but all seemed to go well. Certainly it was a lot less smoky than previous firings. 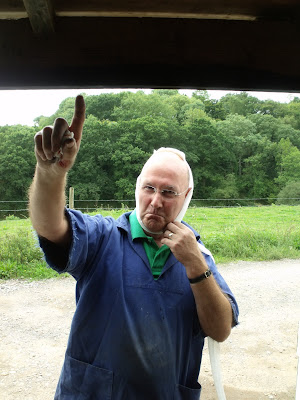 On kiln opening day, poor Alex peeled the top of his head off on my door frame - it was most unpleasant, like scrubbing the skin off a new potato - sorry Alex! I need to get a length of padding stuck up, it never catches me because I'm used to it, but has claimed a few scalps recently. 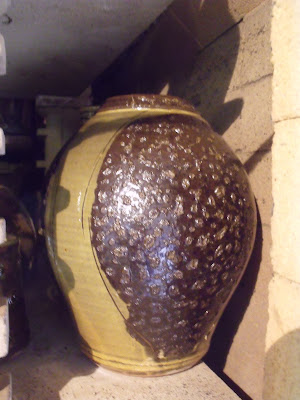 So on to the firing.
Well as ever, it was a mixture of good and terrible, but the good were very good and the terrible were fewer than in recent firings, so it was a marked improvement. There are however, still far too many losses, some inexplicable, for instance this pot of Alex' blistered like crazy wherever there was black slip. I think there are a few changes to make in the way we pack next time.
Fortunately, some very important pieces that are to be part of an exhibition entitled Honest Pots, came out successfully. I'll write more about this show later, it's very exciting, in the meantime, check the link to find out what it's about. The show includes some of the collaborative pieces that Alex and Alice Kettle have been working on and some of these were in this firing. 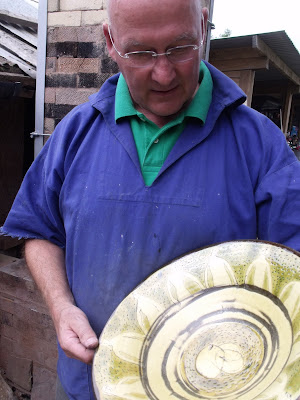 Thankfully, the majority of those pieces came through successfully and the failures can be refired and hopefully, recovered. There are also six of mine in the show, so it was a huge relief to get some new pots through so that I could send good pots that to York and still have enough of my best pieces for the forthcoming Great British Potters exhibition. 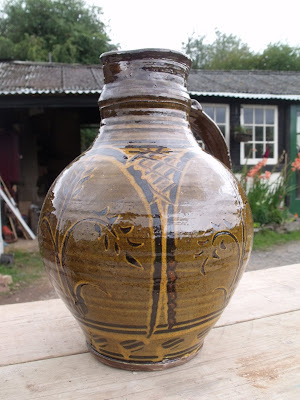 Here are a couple of mine, I'll post some better pictures soon. This is a Harvest Jug, probably about 14" in height. 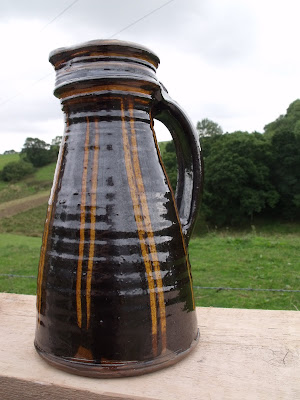 This tapered 'medieval' jug stands about 12". 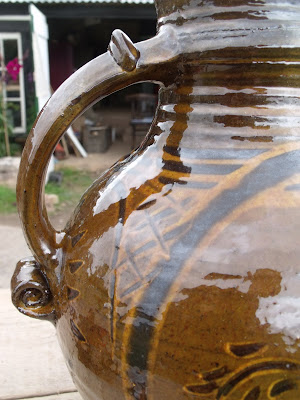 The weekend continued in hectic fashion with a Love Daddies gig on Saturday night in the courtyard of a local pub. Ringo Starr and Kate Moss stayed there the week before as it was Ringo's boy's wedding(he lives locally). Not to be outdone, we provided our very own John the Drums and of course, some gorgeous Love Mummies. More gigs next weekend and the one after that too, so after a year of no gigs and a change in line up, suddenly busy times in Love Daddy land.
Back to work this morning. This week I'm trying to get my little display room sorted out and the woodshed finished. I have the Westcountry Potters Association coming for a day of demos in a few weeks time and I want the whole place finished and operating in a systematic manner before they come, so I'm concentrating on that before making more pots. I'm also making some more tiles this week for an order I've been working on for a while, 30 done, 20 to go, won't be long Dave and Sue!
Posted by doug Fitch at 11:51 2 comments:

Kiln packed last night by Marky Mark and me, burner pre-heated overnight, lighting up with wood in ten minutes. Hope it's a good one. Alex arriving early afternoon. Pictures to follow, catch you later, have a good day all.
Posted by doug Fitch at 07:44 4 comments: