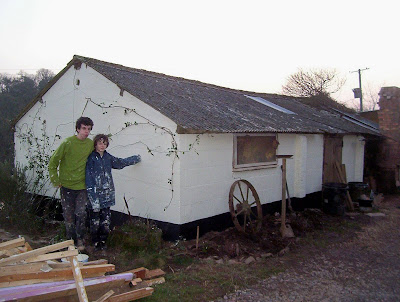 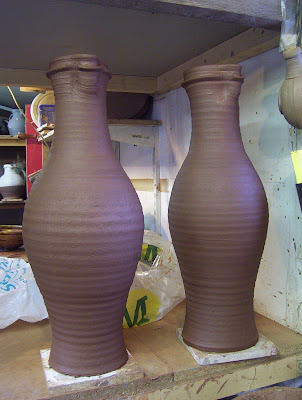 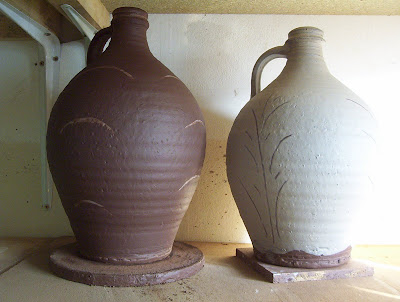 Hil and the boys came back up today and carried on with the workshop makeover. I'm not sure it's the 'family time' they were expecting over the half term holidays, but I think as it's coming along they are getting a good sense of satisfaction. Their efforts have certainly been a huge help to me. Tomorrow should see it finished.

The plant on the wall is a rambling rose that has until now, been rambling across the ground, so it'll should be much happier now that it's held up on wires. I reckon the workshop will look as pretty as Snow White's cottage by the time it's done - with a big wobbly chimney. It just needs Matt to come back with that hat of his, I'm not going to suggest which (albeit tall), dwarf he might be.

While the good work was going on outdoors, I was indoors slipping pots and making and finishing big baluster jugs. I hope to get on to bread crocks and large jars tomorrow. I think Mark's coming up in the evening so I'll probably work on and put in a long day.
Posted by doug Fitch at 20:27

It really does look like the seven dwarfs house, how very sweet.

I wasn't going to say it!

I forgot to say I do really love the tall slim jugs. A fabulous shape.