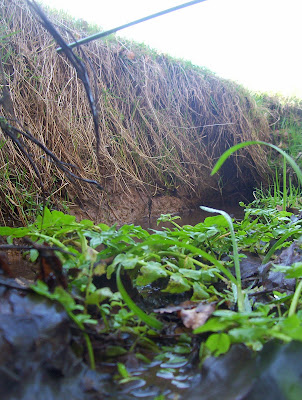 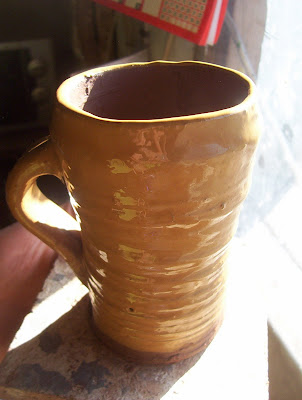 Matt's just headed off home. We've had a good time and the weather's been great again today, so we could get out and check out more of the clay from the immediate vicinity. There's so much of it and just below the surface too. It isn't all that clear on the picture, but the banks of the little stream are yellow ochre clay. I feel even more convinced today, that the way forward is to find a place with a good seam of red earthenware. It's a way off yet but something to aim towards, it'd be wonderful to make pots with clay from the same site as the workshop.
Here's a shot of one of Matt's mugs freshly dipped in a slip made of woodland clay. I've a feeling it'll be brown, but it might be a very lovely brown so we'll see soon. Matt's also threw some pots made from this so they'll be in the next firing. He's going to put some through his electric kiln in the next few days too so that'll be interesting.
It's been cracking, having Matt around this week, just what I needed after the cat thing on Friday, I didn't fancy being stuck in there with just my own head 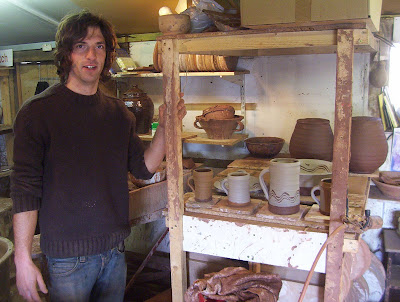 .
We're all getting a bit more used to Butch not being around. Perhaps we'll get a kitten or a puppy when we've had a bit of time.

Joe's parent/teacher interview later, then Marky Mark is coming over and we'll head back to the workshop for an evening session, I've got lids to make and jars to decorate. I'll try and get some shots on later.

Cheers Matt, nice one geezer, see you soon.
Posted by doug Fitch at 14:45

Thanks alot Doug, i've had a great time again. It's been quality digging clay and moving it straight into the pottery to throw it. I want one! An amazing contrast to the streets of Coventry. Speak to you soon.
Cheers.