I'd love to share some pictures of the firing with you, but unfortunately my camera finally bit the dust today, so I've none to show you.

Anyway, it was a great firing, with some pots that I'm very happy to have made. There are a few that I wish I hadn't made too and of course, they're the ones that I always see first.

There are lots and lots of jugs in all shapes and sizes. The large raw jug came out of the kiln just as I'd hoped and the tile frieze worked beautifully.

I'm away for a couple of days now in Cornwall, but I'll get some pictures up as soon as I can.

I went to the workshop today and tidied up ready to unload the kiln tomorrow. I really hope it's all okay - I'm in big trouble if it isn't, as time's ticking away towards the exhibition in November and there isn't time to re-make stuff. Oh well, I'll know tomorrow.

Here are some photos I was sent today, of some of the tiles I made recently, in their new home. 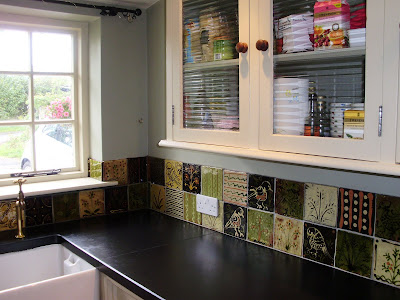 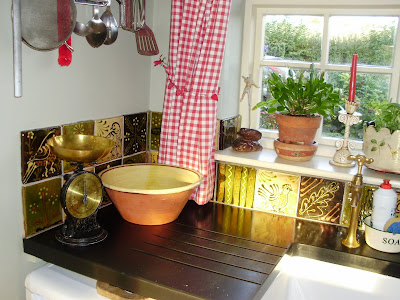 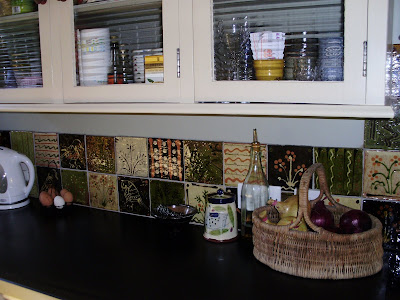 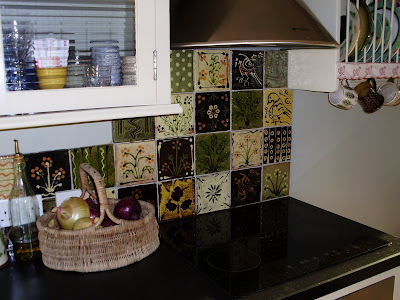 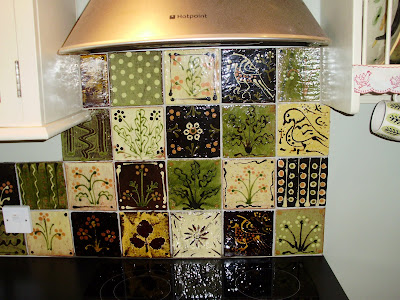 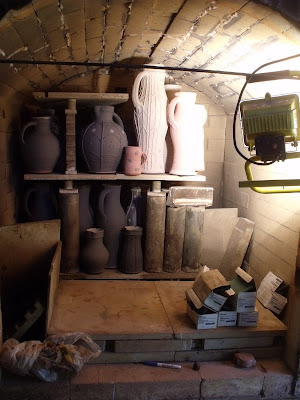 Well I managed to leave my bag(containing my camera) in Marky Mark's car last night after a brain-frying, fifteen hour firing, so I've been unable to upload pictures from the firing, but here are few from before the event. The tall jug at the top is one of the raw pieces. I could see it throughout the firing and it was still standing at the end. I don't know why I worry so much about raw firing, I used to do all my firings this way when I started out and I know huge amount more about firing the kiln now, than I did then. 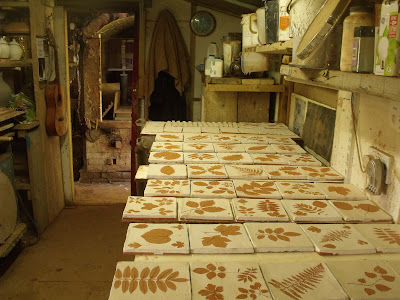 This tile frieze is in the kiln, I'm really looking forward to seeing this come out. This is the one for the seventeenth century manor house and the leaves that I used, all come from the site. The varying temperature/flame/gasses through the chamber will hopefully give them a range of tones, the same glaze being lighter or darker according to its position in the kiln. 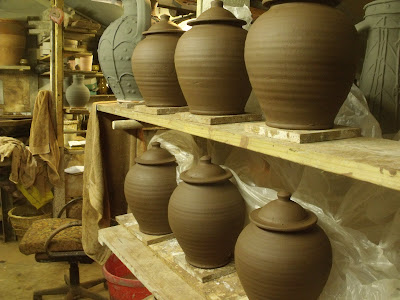 These are some 3lb jars that I made last week - they'll be in the next firing. Three more sizes to make of these, 6lb, 10lb and mega lbs if my arms will take the strain. I need some big pots to fill the bottom of the next firing, so I fancy making some very large jars. 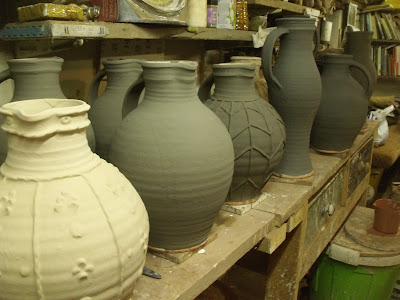 Pots glazed, waiting to be packed. Most of these went in, but I do still have a good number left over, so it's reassuring to know that the next kiln load is well underway.
It was such a tiring day yesterday. I had a gig on Saturday night too, so I didn't get to bed until 1am, then set my alarm clock wrong and got up yesterday at 6am, thinking it was 7am.
We lit the kiln just before eight and fired through the day until about 11pm, before clamming up and heading home at about midnight, tired, blackened and stinking like a bonfire.
I got up this morning to head off to work, but then decided to go back to bed for couple of hours. I've stacks to do t the workshop, but I'm not going to feel too guilty about getting there late today. I'll head off shortly.
I hope this is a good firing. Everything seemed to go really well, but it's always risky, bathing ones pots in the naked flame and it won't be clear until the door's unbricked. I should know for sure tomorrow. I'll let you know what happened, either with a woohoo, or an aaaaaaaaaaaaaaaaggghhhhhhhhhhhh.
Time to get to work
Bye for now
Posted by doug Fitch at 22:29 3 comments: 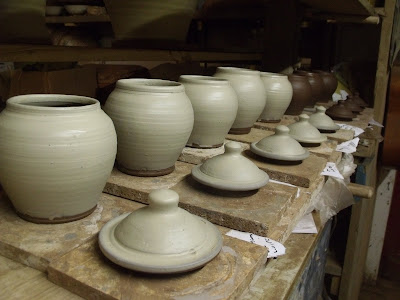 These are the 1lb jars from earlier in the week. Most of them have been decorated now and some will make the firing. I made the 3lb version today - I'd love to get the 6lb ones made tomorrow, but I can't see that happening. 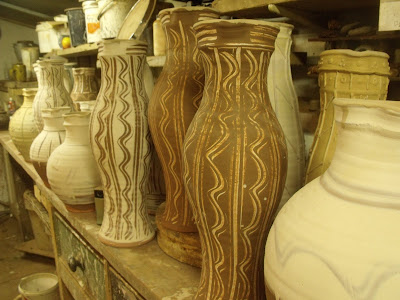 All these pots have to be glazed tomorrow...... 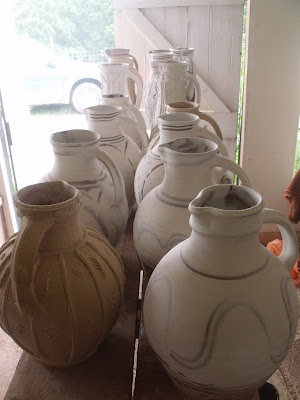 ....as do these and also a big tile frieze which is going in this firing.
I mixed up lots of glaze tonight, so a sieving session in the morning, then on with the job in hand. I gave the workshop a really good clean up before I left, so it should be a fairly straightforward job tomorrow.
Marky Mark's coming up during the late afternoon and we'll start the pack.
I successfully managed to get the glaze on to the big jug that's going in raw, so I'm looking forward to seeing how that comes out of the firing. If it's good, I'll be making some real biggies for the next kiln load. I still have to get it dry enough to fire, but the forecast is good tomorrow which will help. In fact there are several raw pots going in to this firing, so it'll be interesting to see how they fire. 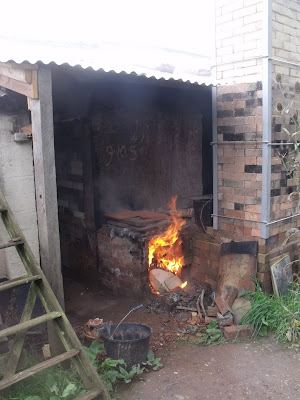 I had a good fire in the kiln all day today, to make sure it's completely dry for the firing.
Four days to the big burn up.
Sleeeeeeeeeeeep
Back soon
Bye
Posted by doug Fitch at 22:40 7 comments:

A blog post at last!!.Pictures mostly.
I've been putting in ridiculously long hours lately, until 11pm some nights this week. I'm trying to get on top of orders and also I'm making pots for a solo exhibiton with Oakwood Ceramics, at The Thoresby Gallery in Notts, which opens on November 11th. I need about seventy five, top quality pieces for the show, so the pressure's really on. I have about fifteen pieces already. Here are some of the things I've been making. 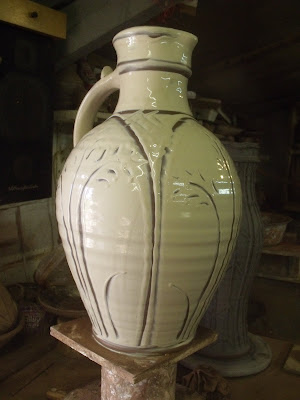 This is one of the big jugs from my previous post, freshly slipped and decorated today. 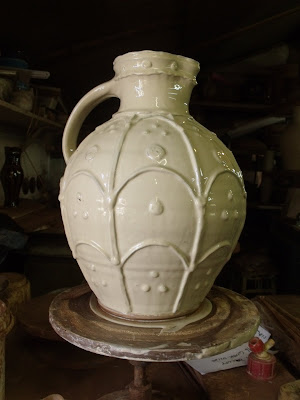 An 8lb jug with applied decoration - these take ages. 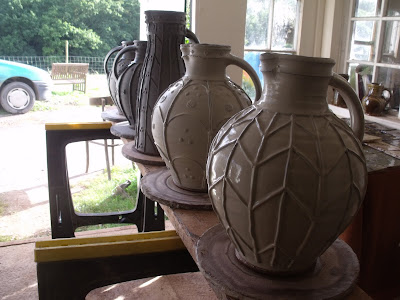 Some more applied decoration. The jug in the foreground is about 12" tall. 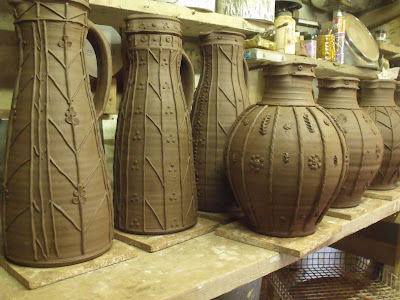 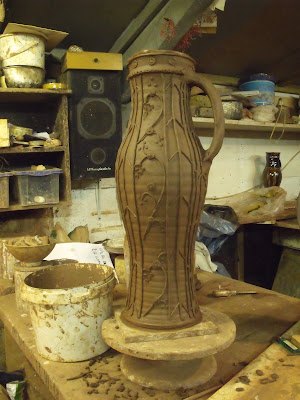 This jug is too tall for the bisc kiln, so will be raw glazed, which is something I haven't done for a long time. I hope it works, I want to make some really big floor-standing pots which, because of their scale, will demand raw glazing. I used to once-fire all my pots when I first started, then for one reason and another, started to bisc fire everything. 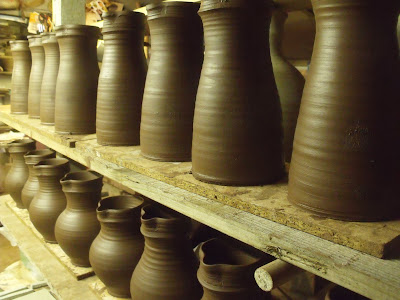 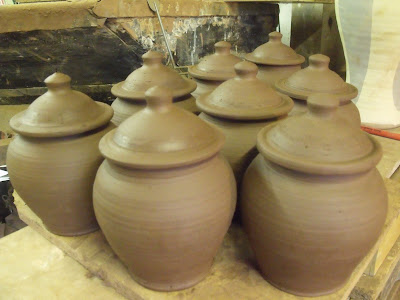 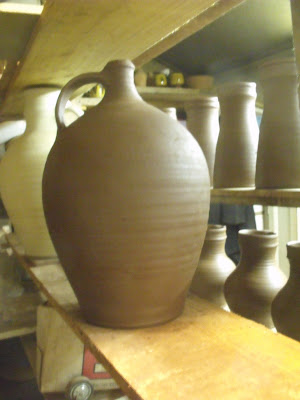 A big bottle. I slipped this today with a single cinquefoil leaf-resist on the front, and a small one beneath the handle.
Firing day is next Sunday, after which I hope to be a very happy and relieved man. It's stressful, working flat out, to produce all this stuff, then to stick it in the kiln and allow the naked flames to do their work. I really need this to be a great firing.
A lot of the pots that I'm making now will go in the subsequent firing, scheduled for a few weeks time - there are busy days and nights ahead.
It took a while to get back in to the groove. Sometimes I never want to make another pot, and sometimes it's the best thing in the World, sometimes my confidence is on the floor, sometimes I'm full of energy and inspiration - I'm glad to be feeling good about it right now.
I'm going to try and upload a short video later, to show you what's been going on, the big jug being decorated and some of the beautiful roses in the workshop garden.
That's it for now, happy weekend all
Posted by doug Fitch at 09:26 10 comments: