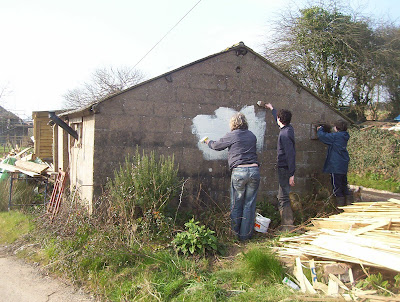 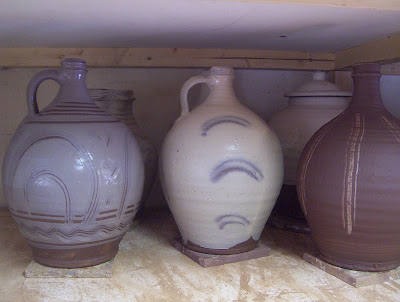 Hil and the boys were brilliant today and cracked on with sorting out the outside of the workshop in the spring-like sunshine. I'll get another shot tomorrow, it was dusk when we left, so I couldn't get a picture of their achievement. It looks so much better with it's Magnolia paint job and freshly dug flowerbeds. There's still much to do, but it's a great start and I appreciate their help because I've so much else to do at the moment that I wasn't going to get a look at it for ages.

I want to take the woodshed down in a few weeks after I've burned all the wood, then build a new one, bigger and tidier, using some of the building materials that I've been salvaging and stockpiling of late.

A couple of years ago, Hollyford was much more of a hippie encampment and my tumbledown shack didn't stand out quite so much. It just looked what tumbledown cattle sheds in the countryside look like. Nowadays, the other barns have become fancy, expensive dwellings and the whole place has a very different ambience. I'm sure all the residents will be much relieved to see the change. I will be too, it needs to become more professional, particularly as I'm starting to get quite a few visitors these days.

While Hil and the boys slapped the paint on outdoors, I was inside making a load more pots, big jugs that'll probably not make the next firing, but will be for the subsequent one a couple of weeks later. Did a lot of decorating today too - more tomorrow. There's a lot to do if I'm going to get two glaze firings through before the end of March.
Posted by doug Fitch at 19:19

I've been searching for a place to call my office in a rural area for years. But, each time I thought it was going to be feasable, the ups and downs of the creative life took a nosedive and made it unaffordable.

These days, if I really need to get away, it has to be in my campervan, which makes much better sense than a fixed and probably very cold and draughty building.

It does look idyllic, though, and nice to see the family helping out. Mine would run a mile :-)

Hi Rob
No better place to have a campervan than in the South West. It was great having them all up there today, Joe my younger boy wasn't too keen to start with but soon got in to it. They're going to come and finish it off tomorrow. It's a strange way of having some family time during half term, but I've got so much on at the moment, it's the only way.

Nice deco on your jars, can't wait to see them after a good bit of fires been at them. I reckon the black and green ones are going to be storming!