Hello everybody.
I hope you all had a wonderful Christmas, I certainly have had a lovely time and have gained half a stone, so I need to get back to work soon to work it off.
I'm pleased to say, all our snow has gone, so I'll be able to get to the workshop with ease when I start back next week. I managed to get a lift up there on Boxing Day with a friend who has a Land Rover, which meant that I was able to retrieve my camera, so I have some out of date pictures to share with you. 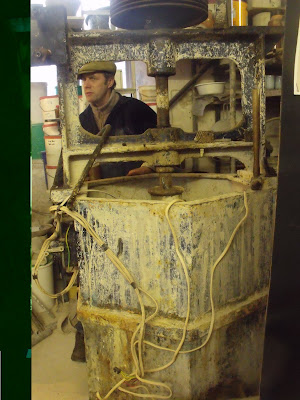 This is a huge blunger which has been given to me by Peter Swanson, a fabulous potter who lives near Penzance, over the border in Cornwall. In the picture is my chum Frank.
A couple of weeks ago, we travelled down to Peter's place in Frank's van, to collect the blunger. What a nightmare, it had rusted up, so we couldn't get it apart. It was too tall to fit through Peter's door in one piece and mighty heavy too, so after much cursing, hammering, further cursing and harder hammering and harder cursing still, we had to abandon it. We'll go back and try again soon, with more muscle, bigger hammers and louder cursing.
I'm really looking forward to getting this fantastic machine back to Hollyford as I'll be putting my native clay processing system in place in the next few weeks. This blunger will mix half a tonne of clay into slip, enabling me to sieve out any debris, before drying it back out, into plastic clay. It is something really exciting, to be fully self sufficient in clay, from the field beside the workshop. 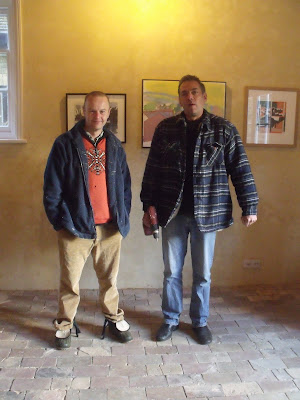 The next two pictures were taken at the group exhibition I was in, on the outskirts of Cambridge just before Christmas. On the left, painter Simon Jowitt and on the right, my big brother. These two have been friends nearly all their lives. I hardly took any photographs at the show. 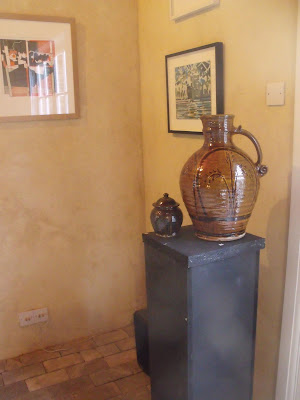 Here's one of the big harvest jugs from the last firing that now has a new home. 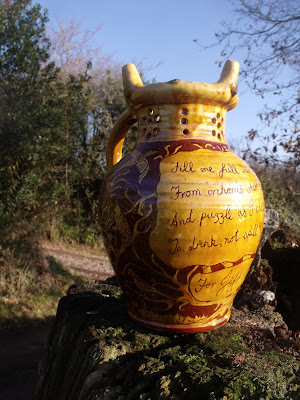 Here are some shots of the fieldfare puzzle jug that I wrote about in a recent post, glazed and finished. 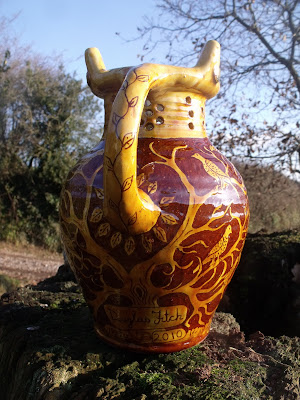 It is most certainly a winter pot, with just one leaf and one apple on the trees. 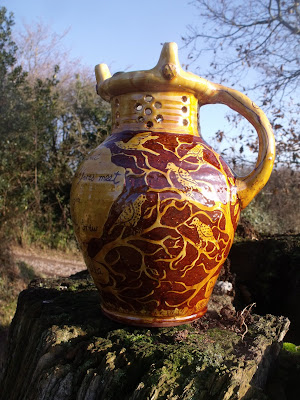 Well, that's almost it for now, new pots to come next week. I want to end by thanking a lot of special people.
A big thank you to everybody who has supported me in the past twelve months, through buying my pots. I hope the pots continue to give you pleasure.
Many thanks to those who have helped me develop the workshop, Different Dave, Croydon Tim, Marky Mark and Frank.
Big, big thanks to Matt and Alex, who own my workshop and allow me to do this at the end of their lane. Without them, none of this would be possible. And thank you to them too for the huge pile of clay dug from their field.
A special thank you and congratulations to Alex McErlain, who has done so much for me in the last year, taking me to Montpellier back in the spring and exhibiting my work in the ongoing Honest Pots exhibition in York City Art Gallery.
Alex has just retired from Manchester Metropolitan University. His kind of knowledge and experience will never be seen again in Higher Education and I know that he has had a profound influence on the lives of many people.
I'm really looking forward to Alex spending more time at Hollyford in months to come.
You may have seen this little film of Alex before, working on some collaborative pots he made with Alice Kettle, but I'll post it again. Congratulations Alex

And of course, last but not least, a big thank you to my family who have put up with the long hours I have to work and erratic income, associated with a career in pottery.
Happy New Year everybody, all the very best for 2011, hope it's a good one.
Right, it's party time!

Well it's been ages since I blogged. Since last I posted, I've had two exhibitions, finished the fieldfare puzzle jug and delivered it to its new owner and been snowed-in and unable to get to work. I left my camera at the workshop, so no pictures of any of that to share with you. Normal service will be resumed in the New Year, when I need to get stuck in to making big style.

As we've been snowed-in, there's been nothing for it, other than taking a relaxing break at home with the family, which has been a delight.

One minute until Christmas day. The boys are in bed, soon it will be time to fill their stockings with goodies. They're big now - too old for Santa, but not too old to hang their stockings up.

I hope you all have a very, very Merry Christmas

Frosty Monday and the Fieldfares in the orchards 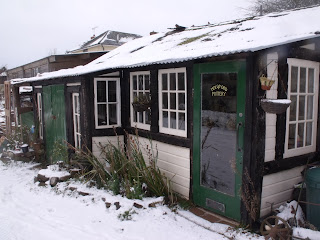 Well I made it to the workshop on Friday and it was indeed, as my friend's picture had shown it - bloomin' snowy and bloomin' slippy. In spite of the man flu, I bravely soldiered on and managed to get the pots wrapped and packed and into Exeter in time for the opening - just. 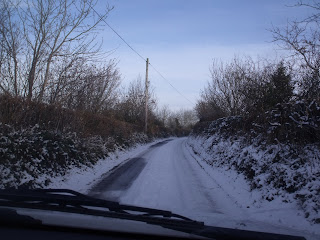 The drive back was precarious, it doesn't look much, but the lanes out in the sticks aren't gritted and as soon as you get to a hill, it becomes a game of stop, start, stop, reverse, run-up, go........ hope for the best.

Anyway, I made the opening in a somewhat unprepared fashion and chatted, through a fever of man flu, to the good folk who came on such a cold night. I didn't take any pictures, I'll get some later in the week. 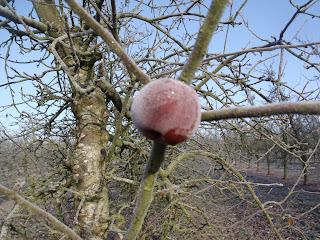 This morning I walked to work. This is the frosty orchard. 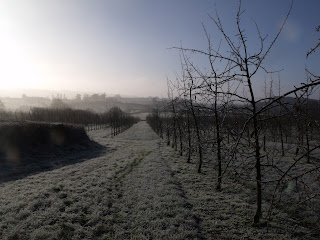 The trees were full of Fieldfares, they always are at this time of year, they migrate in from Northern countries for the winter months. 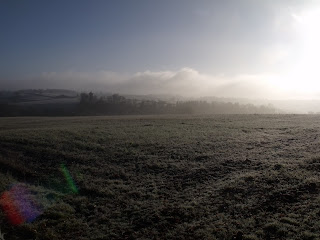 It was chilly, but beautiful. 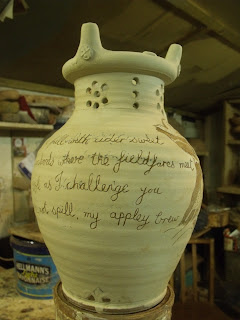 I have been waiting to get on to sgrafittoing this puzzle jug and the walk through the orchards inspired it's development today. Usually I pinch a traditional rhyme from old puzzle jugs, but this one has one of my own, written in a similar, folksy kind of way. It says:

﻿Fill me full with cider sweet
From orchards where the fieldfares meet
And puzzle as I challenge you
To drink, not spill, my appley brew.
﻿ 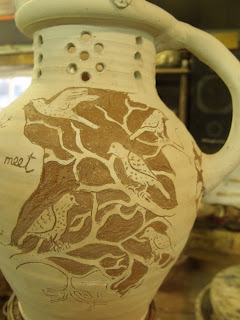 So far it has a number of birdies that look (very, very)vaguely like fieldfares- well they have speckles and two wings at least. They're hanging out on the bare, winter trees. I could make them look more realistic(yea right) if I were to copy them from a book, but I like the idea of drawing what I think they look like, as they would have done in the days before photography. I hope that they capture the naive essence of the old North Devon slipware jugs that I admire so much. Many hours of scratching still to go this pot.
Well that's all for now other than to invite once again, anybody who would like to come to:
The Exeter show
The Cambridge show
Or to browse the Great British Potters on-line show

First of all, thank you to everybody who left comments about my latest firing - I think it's one of the best I've ever had. 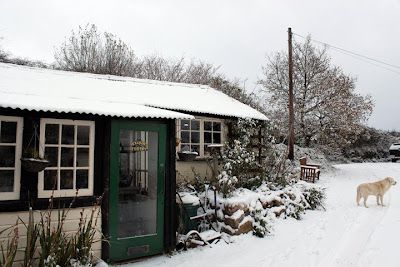 This is what the workshop looked like today, not that I got there. This picture as taken by a friend who lives at Hollyford. I was snowed in and crashed out on the sofa at home with a nasty dose of man flu. The boys have been off school today too as the school buses weren't running.

My pots, which need to be in an exhibition in Exeter tomorrow, are still snowed in in the workshop. I'm hoping I'll be able to get there tomorrow to get them, or I won't be able to have any pots in the show for the opening tomorrow evening.

I might even be too man-flued up to go - oh it's tough being a man with a cold.