Well I made a big pot before I left this morning. It's a replacement for the one I messed up last week in Scotland. It'll stay under wraps until I can get back to it next week - hopefully I'll not knock the top of this one!

I'm back in Devon now. Hannah had some commitments in Scotland and she's still up there, so I've been working alone and missing her of course. I love working with her, we make a great team.

These little jugs came out of her kiln earlier in the week. They take ages to decorate. 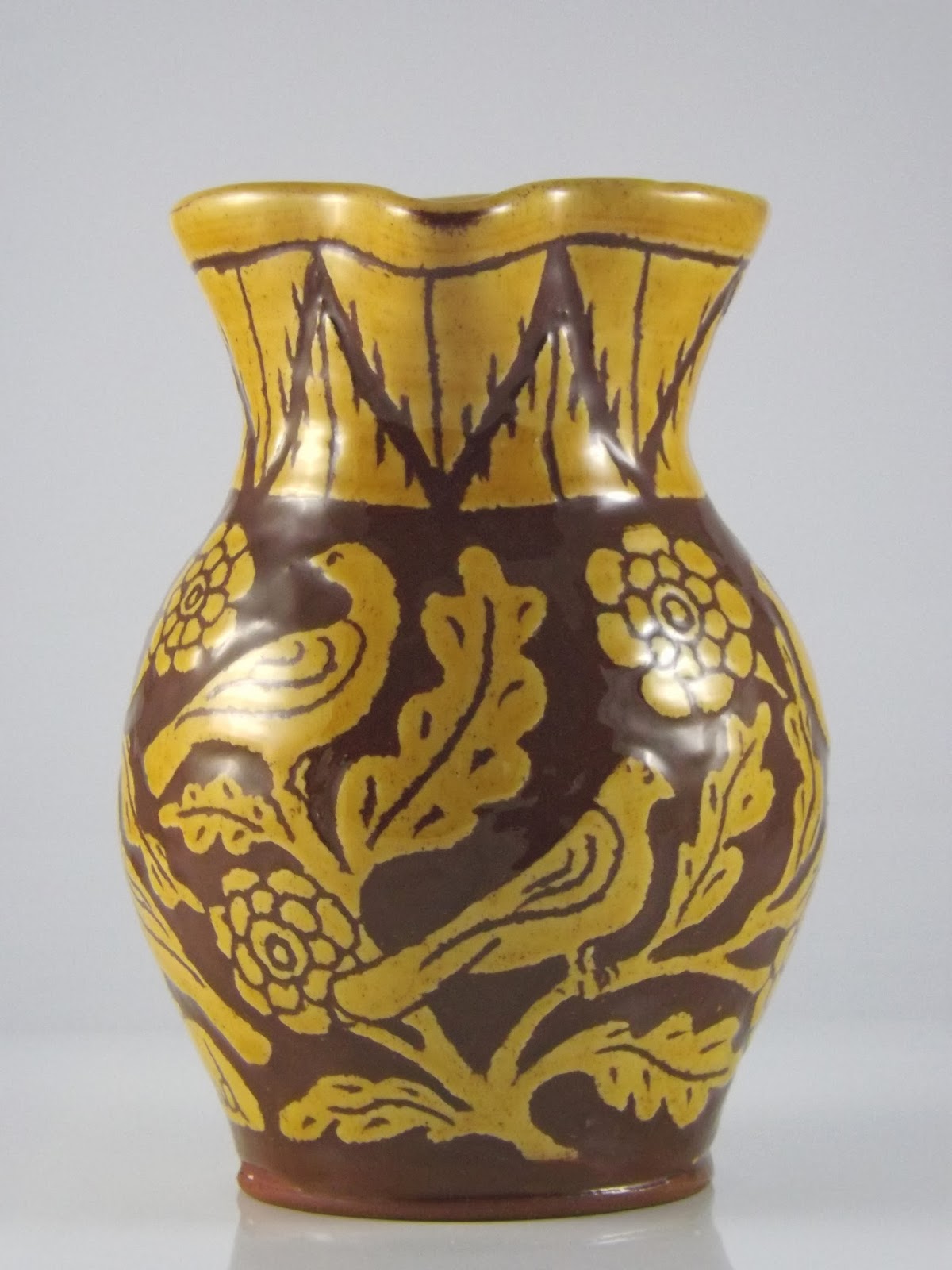 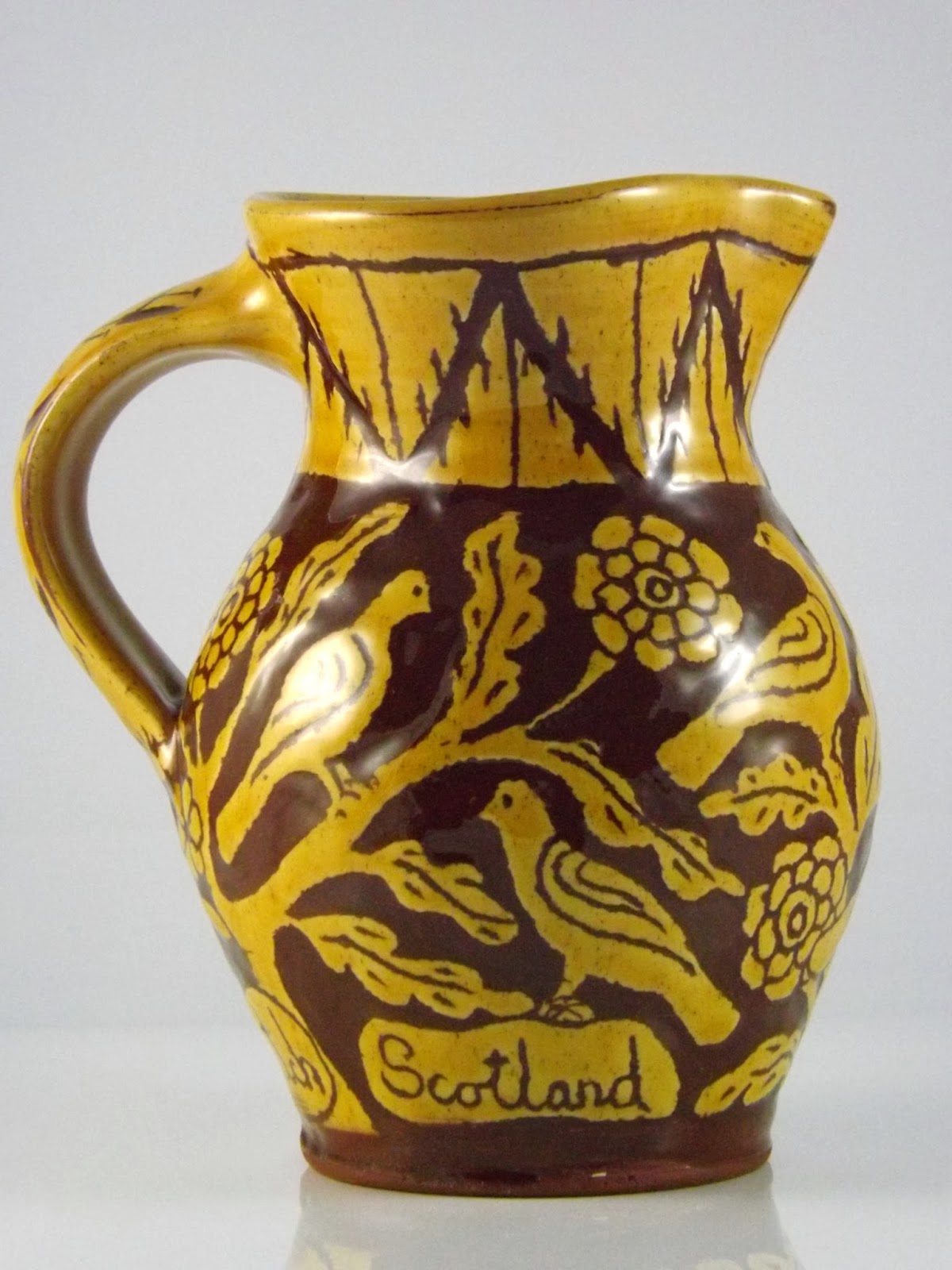 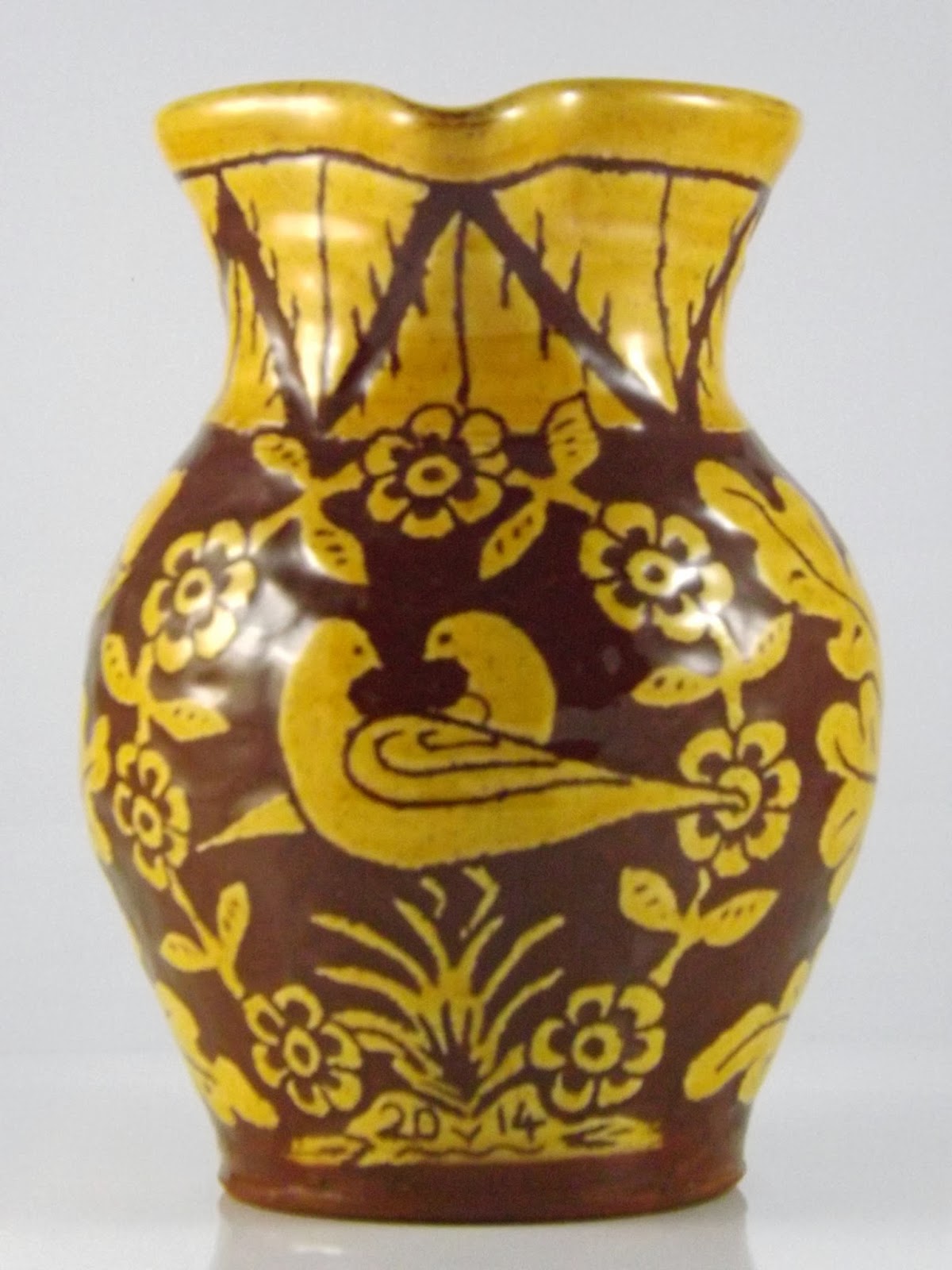 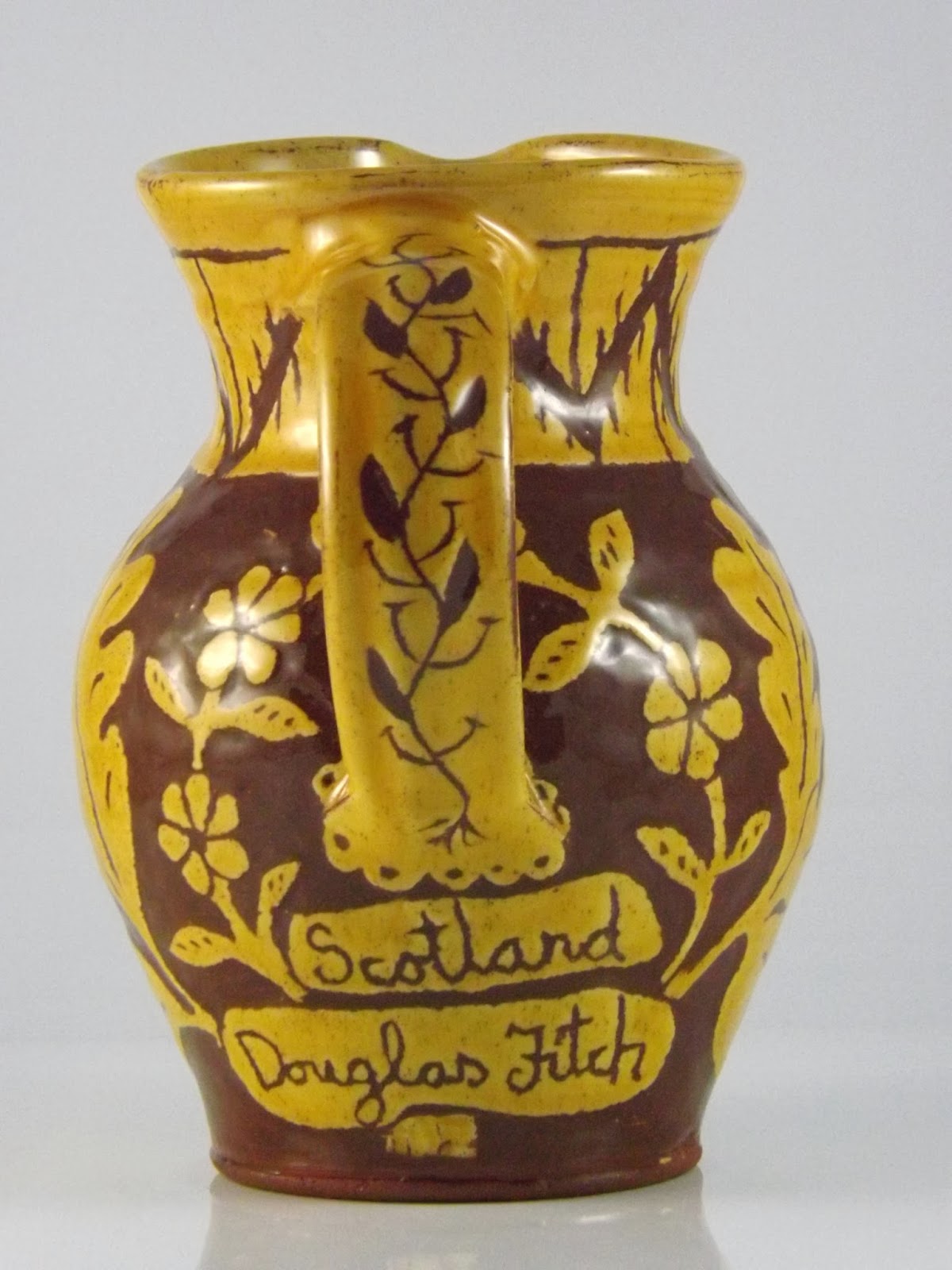 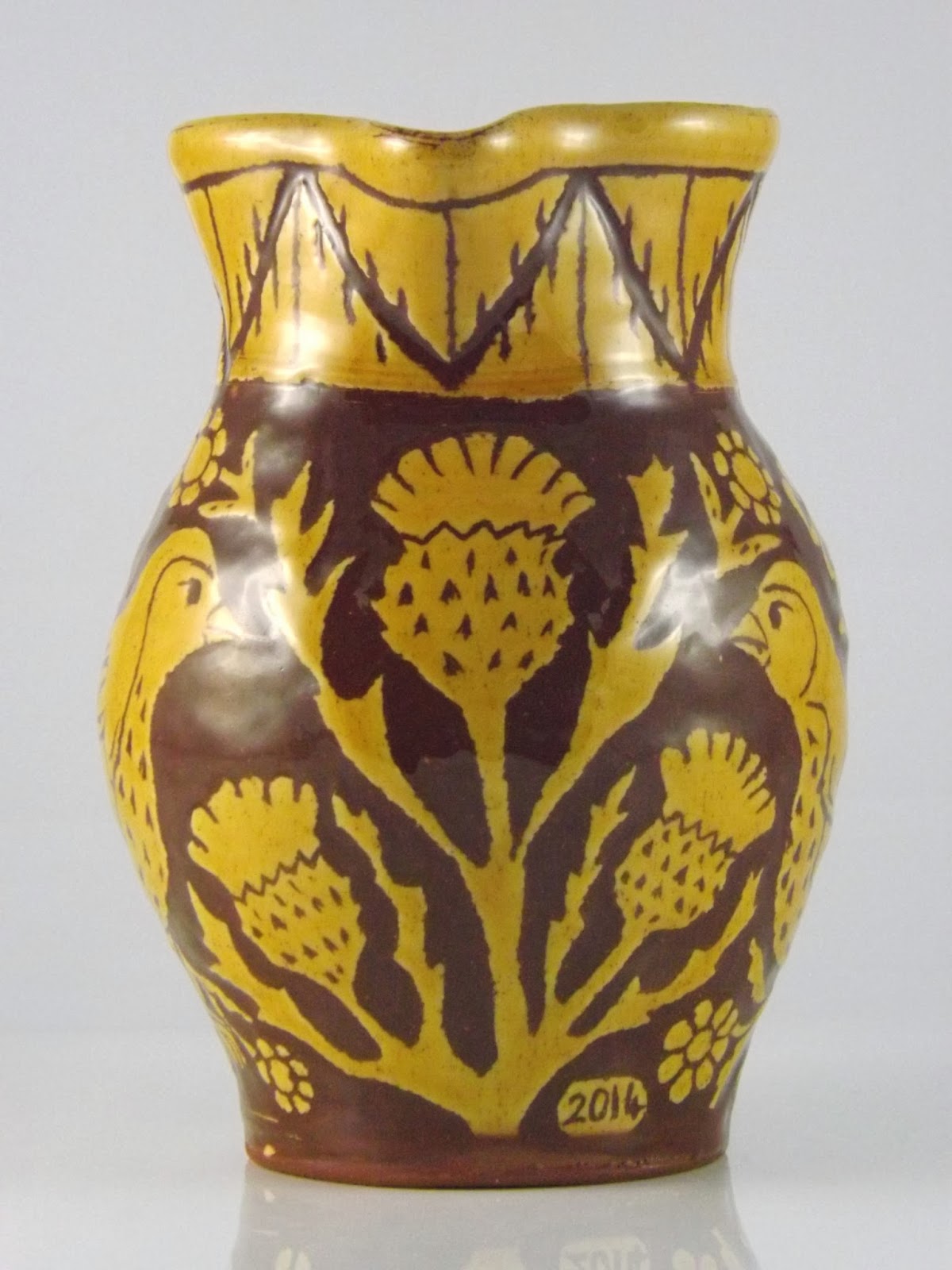 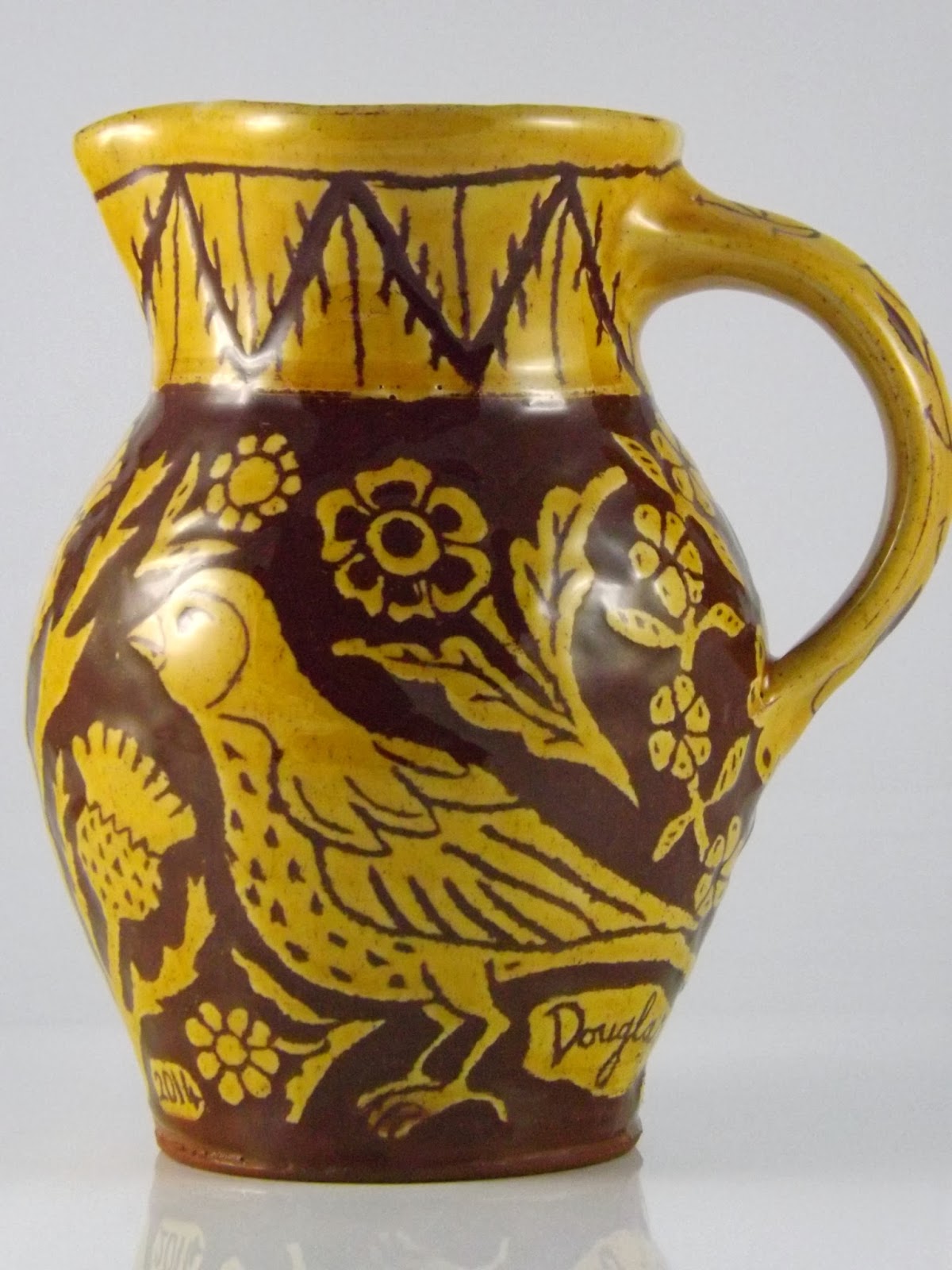 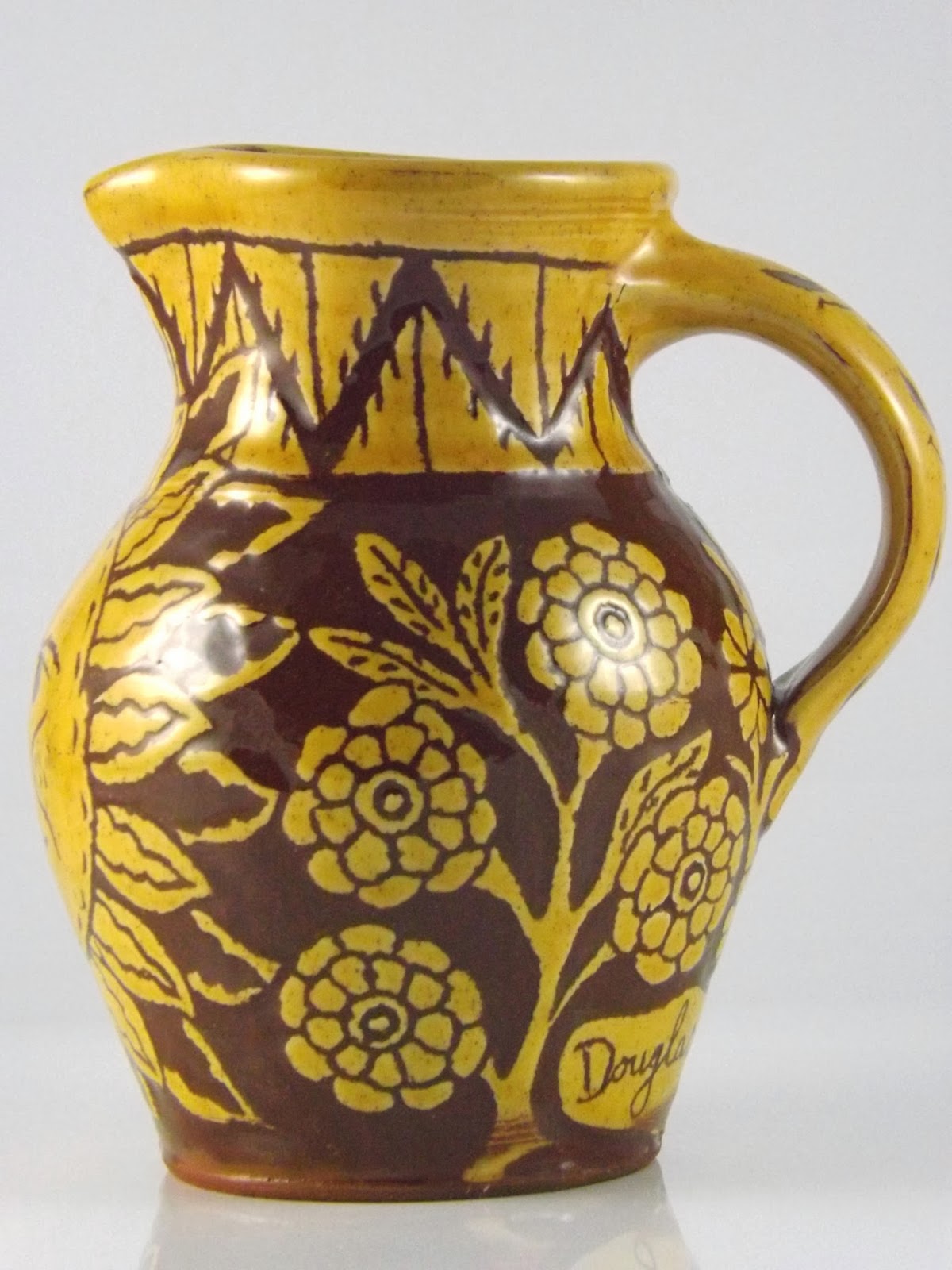 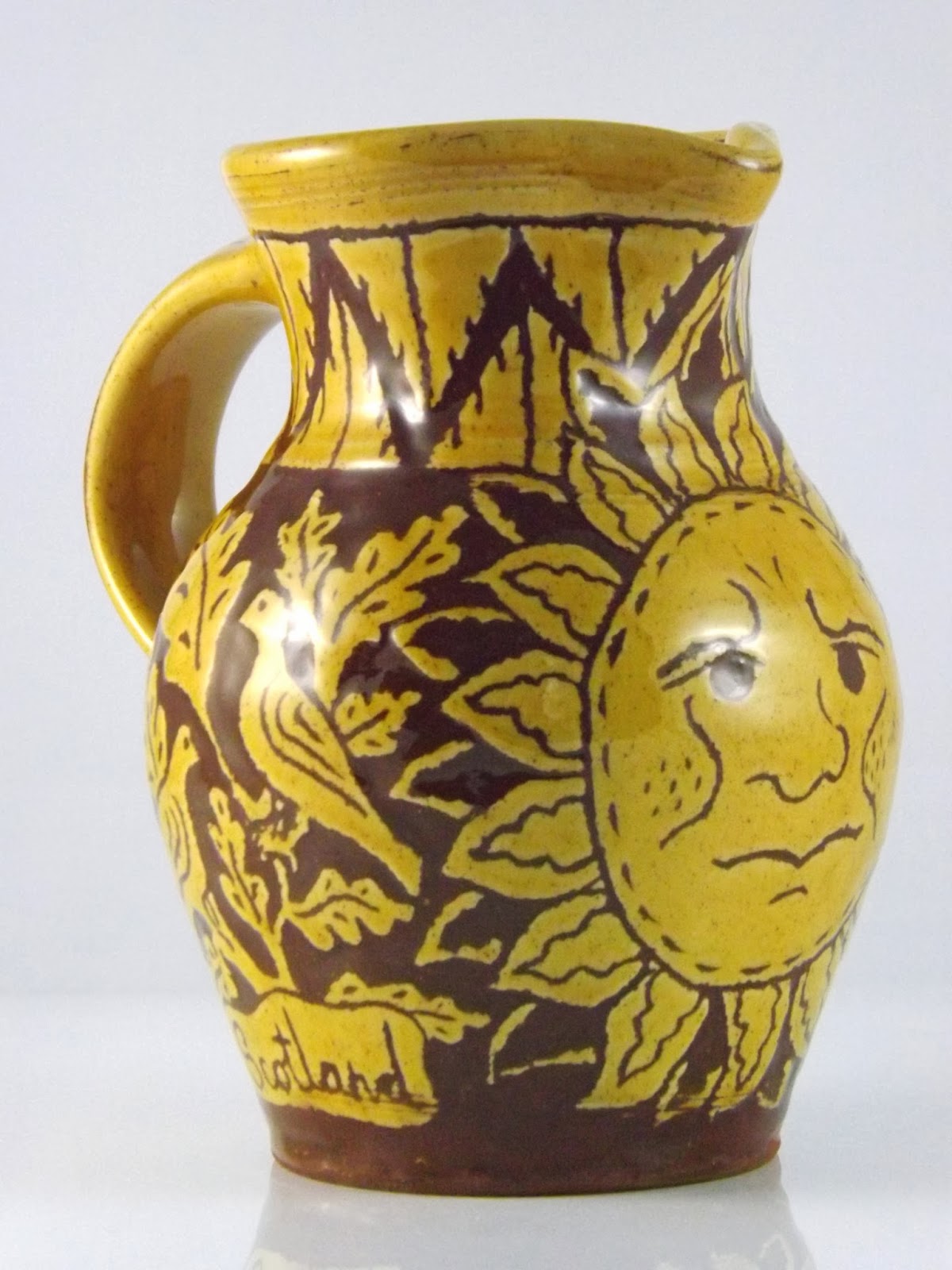 The sunshine is grumpy on account of all the rain we've had lately!

I made some mugs before we went North and they were still wrapped in plastic, awaiting handles and sprigs when I got back here, so that was my first task.

My showroom is very sparce and I'm gradually working my way through a making list that contains every form that I produce. At the moment I'm still distracted by tapered jugs, which I want to make in several different sizes - today's are 3lb.

They'll be left under polythene for a few days, as I head to my parents' place later this morning. Sadly my sweet Dad is very poorly.

Well I made a big jug today, then spent the whole day decorating it. It was going well and I had an idea for the decoration that would have been quite effective I think. But then, right at the end of the day, I managed to knock the top off it, so it was returned to the reclaim, boo. At least I still have a video of it, part completed, as you can see below.

Hannah took some photographs today of the pots we fired last time I was here. These are a few of the little jugs that I made 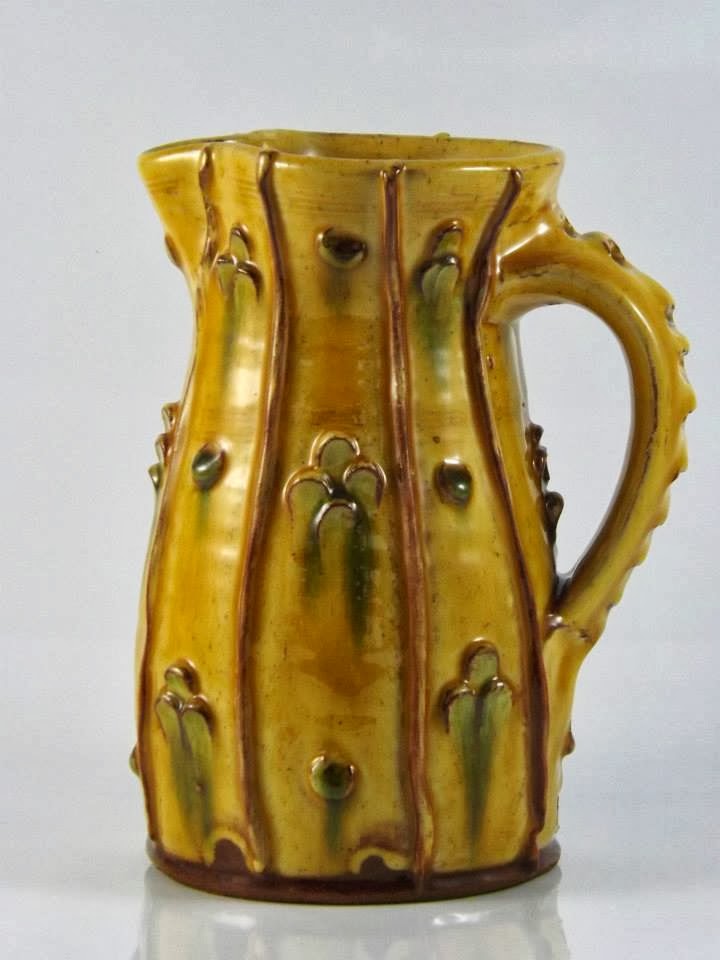 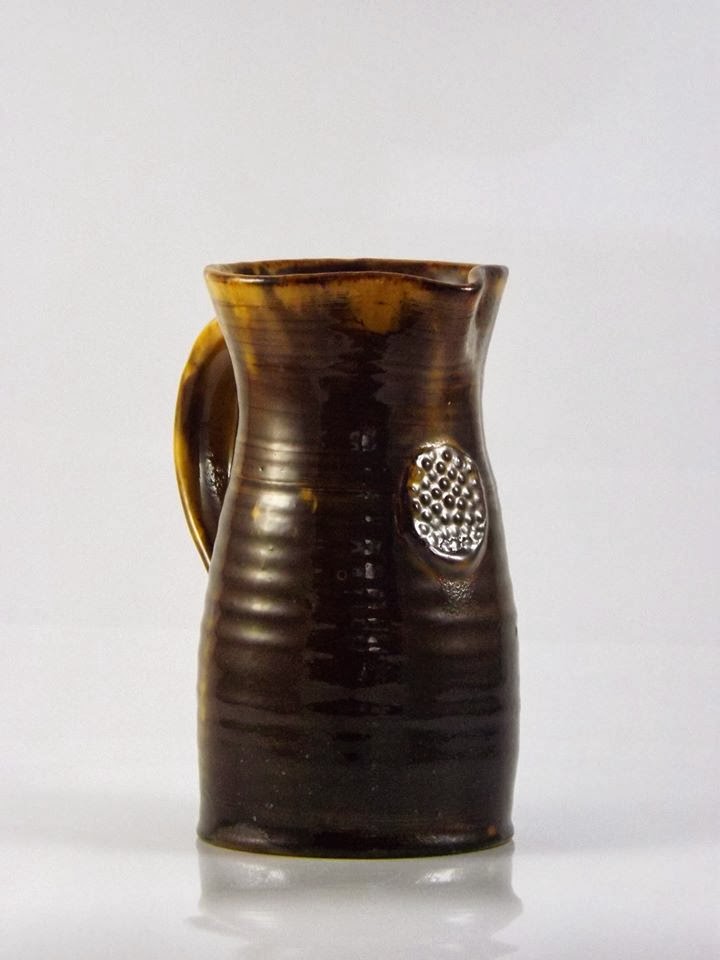 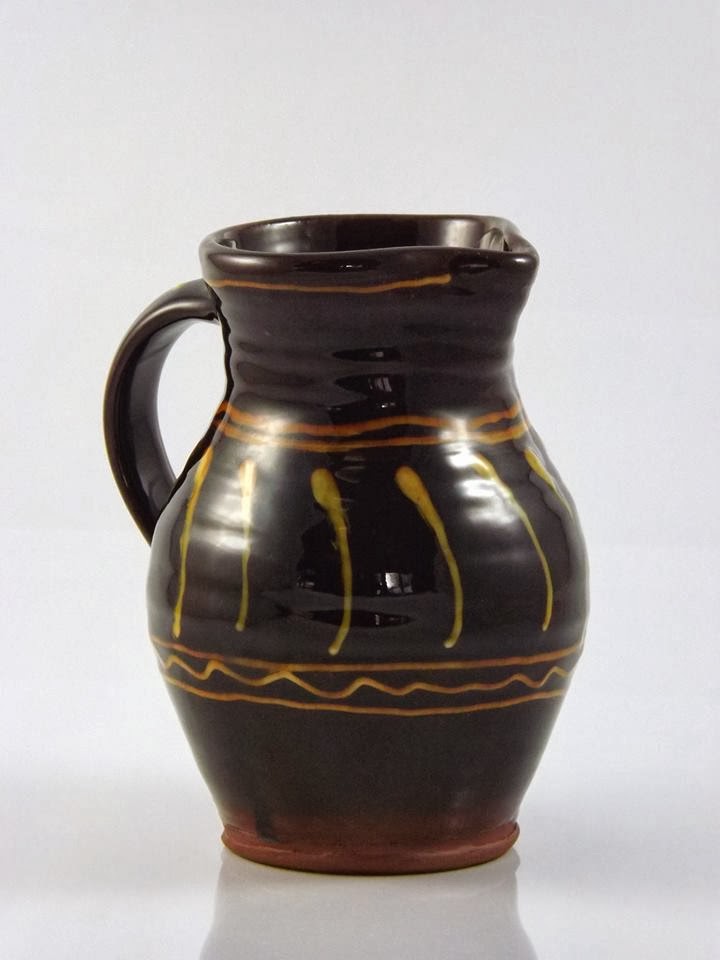 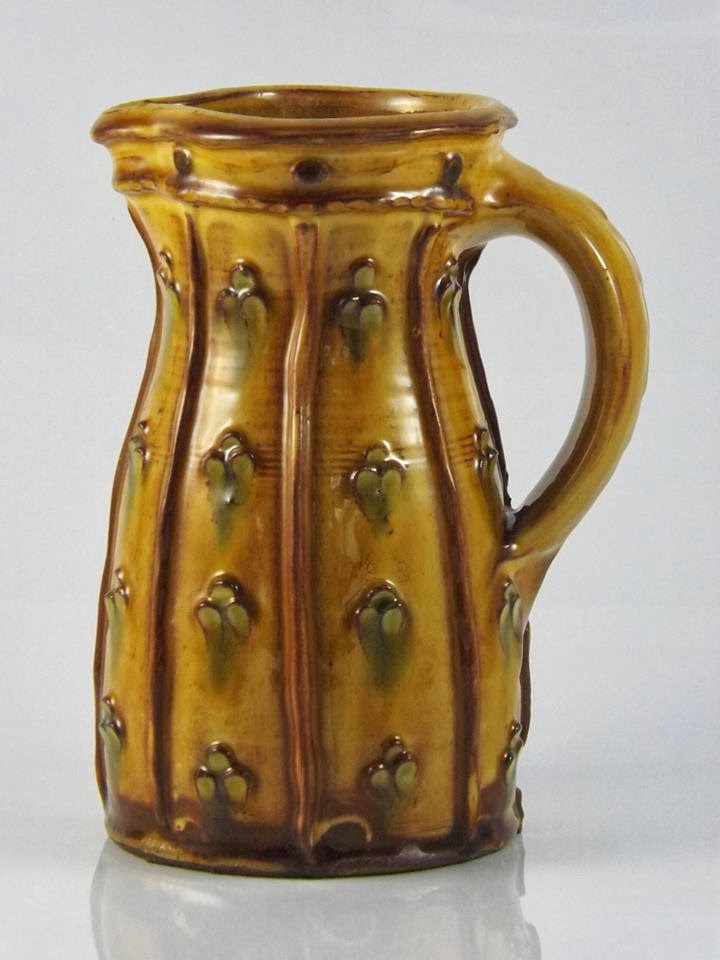 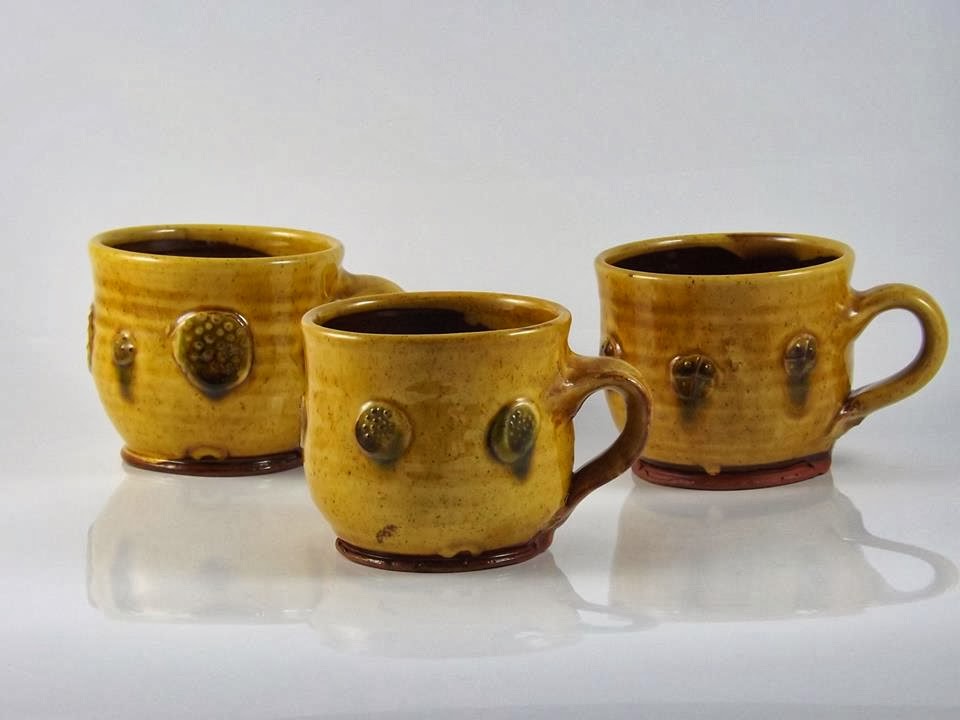 Mugs, thrown by Hannah and handled and decorated by me.

And here's the film from today of my jug that copped it, grrrr

Back across the Border

Here we are back in Scotland.

We travelled back yesterday, a long journey that was straightforward enough until just short of the border, when suddenly the engine on Hannah's van cut out and we were stranded at the side of the M6 in the pouring rain. The timing belt had snapped. So a couple of recovery vehichles and a taxi later, we eventually got home, tired and fed up.

This morning, we walked the mile and a half to the workshop in the rain. It didn't matter that it was raining though, it was good to get out in the Scottish countryside. We both realise how blessed we are to live in beautiful places and it's wonderful that we now get to share them with each other.

Hannah spent the day packing up the pots from her on-line exhibition and I scratched the little jugs that I made here a while ago. There are four of them, I aim to get them all done this week, then fired up and for sale on my website as soon as I can - we need a new engine for the van!

We worked late and walked home in the dark.

Thank you to everybody who commented on the Valentines Day blogs. It's such a joy to be doing the thing that I love, with the person I love, words cannot explain.

Here's a little film of our day today, back with more tomorrow

Something for all you old romantics

Our wholeness, our consciousness
Proclaimed within a brown clay jug
Our Earth, our clay, our harmony
As integral as marl and grog
Our slip, our glaze, our synthesis
Layered, shining bright and bold
Our kiln, our fire, our burning light
Our tale of Love set in stone 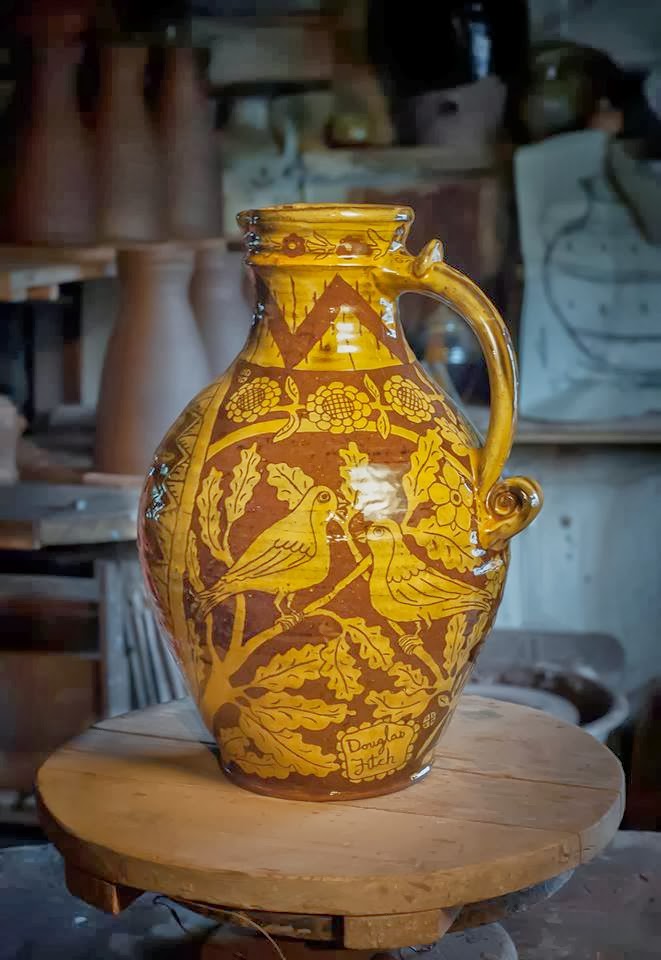 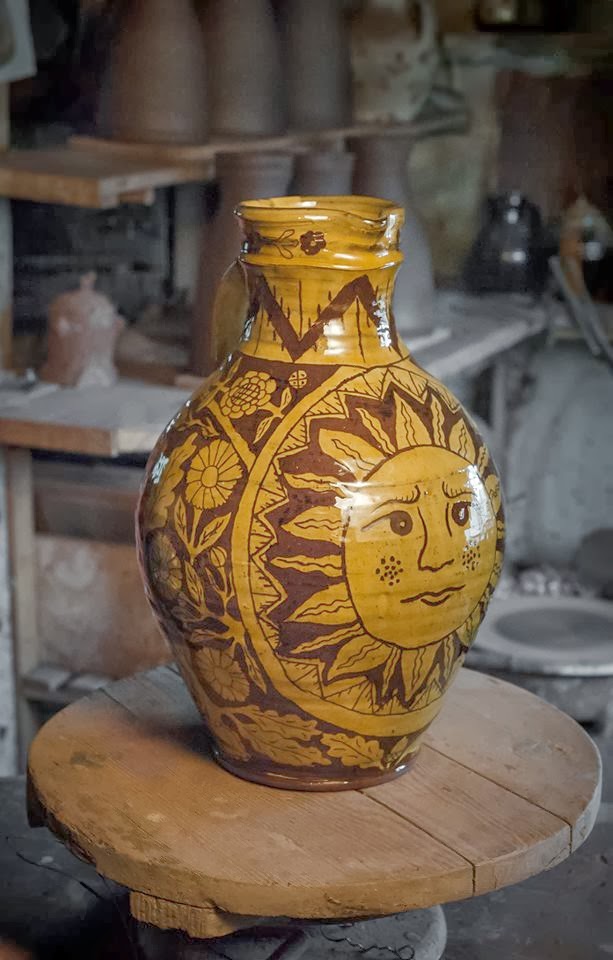 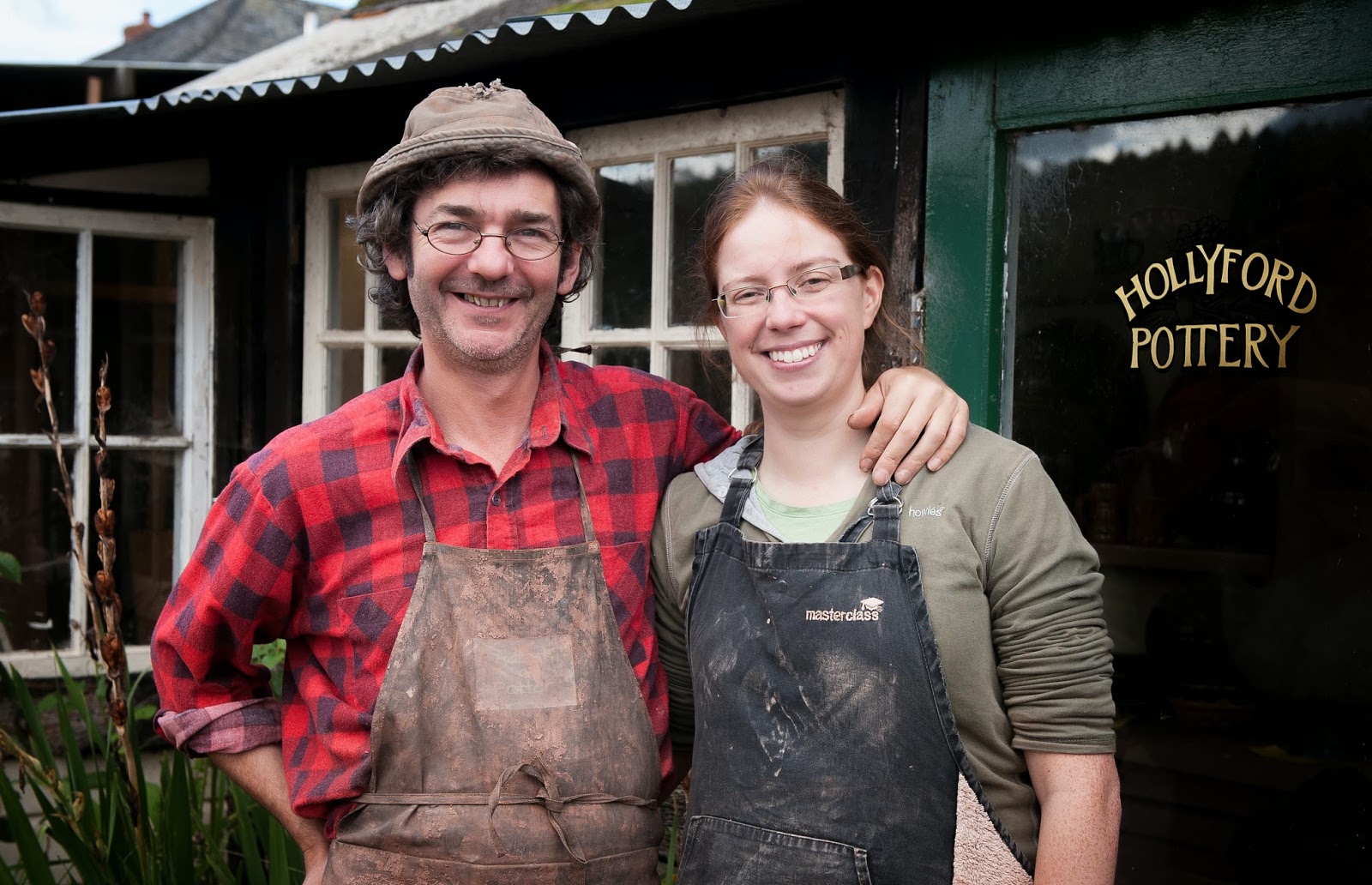 Here's breaking news about some beautiful pots from my wonderful girlfriend, available this evening

Back to sleep for me, catch you later on
Posted by doug Fitch at 09:07 4 comments:

We're back in our Devon workshop, making pots under stormy skies. The weather's been really wild here, winds so strong that a section of workshop roof took off a few nights ago and flew off down the track. There's another crazy storm coming in as I write, so hopefully the rest of the roof will stay on.

Poor Hannah's been really under the weather, with a nasty lurgy, so she's been tucked up in bed, trying to sleep it off. Thankfully she's on the mend now, but I've a feeling I may have caught it from her.

I told myself that I was going to make no jugs for a while and that I was going to concentrate on making bowls. Unfortunately Alex showed a slide of a beautiful medieval jug during his talk last weekend and it's been stuck in my head, so I had to get on the wheel and make my own version.

So the rest of my time has been spent finishing them.

Yesterday Hannah was much better, so we got some proper time together, walking in the countryside before the next storm came in, then working until the early hours in a toasty workshop.

More potting fun to come today, after a trip to in to the big city to pick up Hannah's pots from the photographer's. I'll post some pictures of her special tenth anniversary pots later.

The wind's getting up, but the sun's shining, I think I'll pop out for a minute and look for a rainbow.

Happy Saturday everybody
Posted by doug Fitch at 11:37 2 comments:

We unpacked the kiln yesterday morning in torrential rain. There were a lot of beautiful pots, a bit of underfiring at the bottom as we expected, but it was a really successful firing.

We're on our way to Ruthin for today's talk, then back to Devon tonight, ready to make lots of pots in the forthcoming week. I feel like I have a new found energy, so I think the pots are going to flow - they certainly need to as my showroom is virtually empty at the moment. I'll let you know.

Happy Sunday everybody
Posted by doug Fitch at 09:01 5 comments: