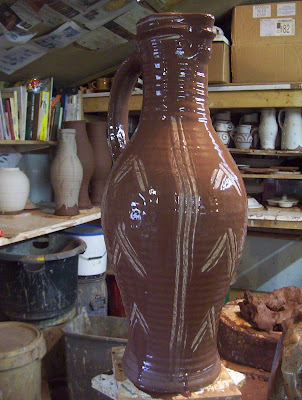 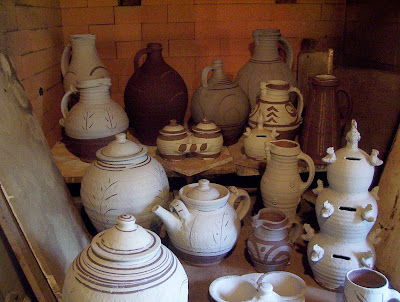 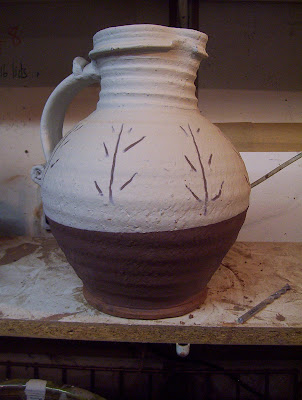 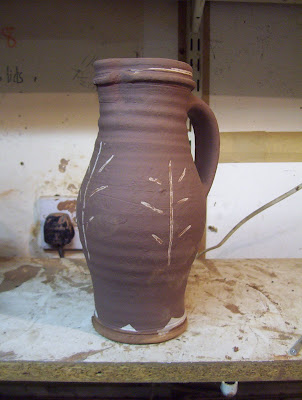 I started packing the kiln today. I think that it'll be just about full by the time all the pots are in, but only just Marky Mark's coming up in the morning and hopefully we'll get the pack completed and if we do really well, the door bricked up too.

I took this shot showing the variety of things that are going into this firing for the sake of my own head as much as anything else. There's a whole load of flatware too that isn't on the photo, platters and dishes. Because I tend to make sixes of everything, I've got six of pretty much everything on the photograph so, as long as it's a good firing I'll be ok for pots. If it's not, I'm in trouble, although I've still got a lot of pots up in my attic that I kept back from the last two firings specifically for these shows.

Today I got the black slip onto the large jugs I made earlier in the week. That's always a relief, dangling a 14lb pot upside down over a bucket with one hand, while trying to pour slip with the other, is always a challenge. The tallest of these is about 540mm so there's a bit of a knack to it, because once it's upsidedown it has to be swung up the right way without touching the wet surface.

Whether I'll get enough pots together for another bisc firing remains to be seen, but I'm certainly going to try. If not, I'll bisc what I have in my new electric kiln(that still isn't wired in yet) because I'll definately have enough pots for another glaze firing. There are always a lot more pots in a bisc because it doesn't matter if they touch. I've already got a stockpile of biscuited pots, plus these new ones, it'll amount to a glaze kiln, albeit a loose pack.

The other two shots are for a bit of a before and after thing - let's see what happens.

Off to band practice soon and hopefully a bit of a de-stress. I always get a bit anxious in the lead up to a show and it's starting to kick in. I'll be much happier when (if) everything's fired successfully.

That's a lot of pots. It will be nice to see a shot of the loaded kiln once you and MM are done.

I'd like to see you slip one of those jugs. That'd make a good You Tube clip. I wimp out with things like that and tend to wax the base and pour the slip from the top. Not nearly as exciting.

I am slowly making my way through the McGarva book. It's a totally new world for me.

I'll be sure to take some. I hope we get it done, I'm starting to feel the stress! I've got to be honest I'm terrified at the moment, but hopefully all will go well.

I'll have to try and get some film of the jug slipping thing, my camera only does about thirty seconds so I'll have to get a new one when I sell some pots, but I'll do it.

What do you make of the book? I love country pottery, that's where the grittiness of my pots has come from. I like a lot of the old US redware that I see on the net, terrific skill those potters had.

..........continued
I pour from above sometimes too, but I like the irregular line left round the foot from pouring and the variable thickness you can get with the slip where it overlaps, so if it's at all possible to dangle and pour, that's what I do, otherwise it a pour job, but I'm pretty messy when I do that.

I like the irregular line around the foot from the 'dangle and pour' too, it's a very distinct process-made mark.

I like how McGarva really describes the captions, he's really studied them and points out little things I'd otherwise miss. I love the chapter on Clay Preparation. It's so cool to see how carefully thought out and organized some things were. The whole Soil Hill operation is amazing. Seeing the machine room there on pg 45 just made me think about standing inside it, hearing the noise, seeing the clay come from the pugmill, what it must have felt like, etc.
There is a great book by Charles Zug called Turners and Burners, it documents the folk pottery of NC from the mid 1800's to the mid 1900's and it's neat to see many similar processes as in the McGarva book.

The pan ring was a great idea. What a space saver.

Anyhow I like it, and I'm kinda going through it slowly and randomly.

Oh and I had no idea those rectangular dishes were marked because they took on the particular flavors of the food cooked in them ie 'mutton' , whatever. I just thought they were marked as a suggestion or whatever. Very earthenware specific type of thing that is.

I had a dvd of Issac Button the last potter at Soil Hill. It was shot in the early sixties, about a year or so before it closed. It was an incredible bit of film, amazing skills. Unfortunately I leant it to somebody who promised they'd copy it and send it back, but they never did!

I've never seen the Button film but many of us always talk about somehow getting it. I don't know if anyone is selling it, but if you hear of someone let me know.
Just got in from loading the electric kiln at the arts council. I hope it all comes out okay.

Ron, I'm pretty sure I can get another copy soon and when I do, I'll make sure I get a copy to you. Dana tried to do a copy of my old one for you but couldn't make it work.