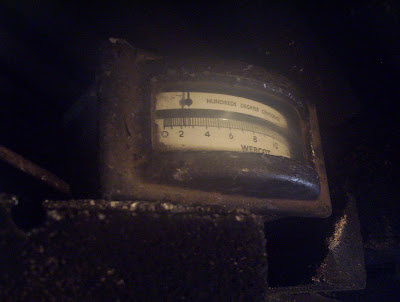 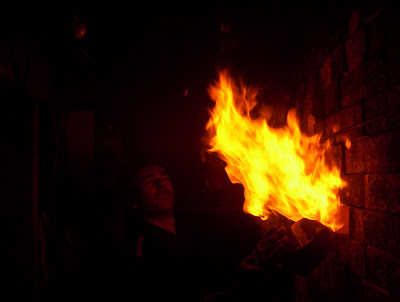 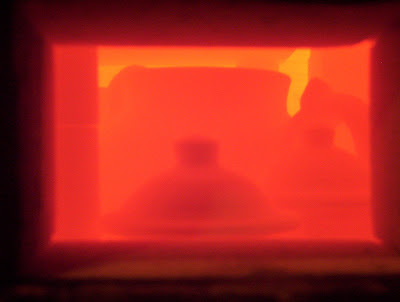 Well that seemed to go ok, although it was not without panic. During the early stages, the pyrometer gauge, which is the piece of apparatus used to register the rate of temperature climb, stopped working. Clearly it required the manual skills of a man who plays with gritty mud all day to sort it out, so I took it to pieces and got stuck in with a screwdriver. Once I'd got the top off, I discovered that it was all complicated, fiddly mechanisms inside, springs and wires and shiny things. All the components were magnetic too and as my screwdriver pulled away from one and slapped uncontrollably and percussively against another due to its magnetic pull, my attempts at repair just made things worse. Even another dig at it with a plastic knife didn't help. So there I was, one of the most important firings of my career so far in full swing and no idea of the temperature in the chamber.

As fortune would have it, there was my old pyro that had stopped working years ago, lying on top of the kiln, so I wired it up and thankfully it sprang back to life - phew, it had obviously needed its two year holiday.

I started the firing at 8am, then continued through the day, chainsawing up loads of recently acquired pallets and burning them as I went along. Somebody told me the other day that vegetable oil is fine as a chain lubricant, so yesterday as the wood was burning there was the most wonderful aroma of chips frying.

Pallets make great kiln fuel because they have chunky hardwood bits for a short, hot flame and longer softwood bits for a faster more furious flame, it's a bit like firing fuel in kit form - and of course they're free and plentiful. They're just a bit of a pain to store until they're chopped, because although they stack nicely, they come with a lot of fresh air and I don't have much space, so I was pleased to get them burned and to save the lovely dry skinny stuff in my woodshed for the glaze firing.

Mark came up after work and we fired until about 11.30, then sealed everything up with wet clay and went home.

Late to bed again, so when the alarm went off at seven this morning, I decided to stay in bed to recharge in readiness for a frantic glazing session in the next few days, I've not long been up - I'm knackered.

Hopefully my chimney stayed up overnight, my mother just called and said there was an earthquake last night, I think it was more up-country than down here so I'm sure all's well..

Bisc firings are such a bore, no shiny pots to look at through the spy holes and the knowledge that when the door's unbricked, they'll only be half way done. Oh, well, it's all part of the process.

Here are a couple of shots from the firing - as ever, that old favourite, chuck loads of wood into the firebox, then pull out the spyhole - will I ever tire of it? The others, a view of a lid through one of the bottom spy holes and the pyrometer doing its thing.

Unpack on Friday, slap the glaze on on Monday and Tuesday, pack the kiln on Tuesday and Wednesday and set fire to it all again on Thursday - new pots a week on Sunday, can't wait. it's been a long time.

Ron has just had a great batch of slipware pots out of the kiln in the States, check it out.
Posted by doug Fitch at 12:48

Sounds a bit hairy Doug, bet you are glad you kept the old Pyro. The day off was a sensible idea I reckon too, save another migraine happening!
Good stuff, glaze, glaze, glaze!
I slept through the earthquake although it sounds like Tig and the cat were crapping themselves and couldn't wake me up!
M

It was a bit of a moment of panic. It would have been ok, there were cones in the kiln, but it's always good to know how fast you're going, particularly with raw pots at the early stages of the firing.

I can't imagine the earth moves for Tig all that often, she should have made the most of it, ha ha!

Will send you shots of your pots as soon as they're out. Hope all is good with you both.

Of course, with builders digging around my foundations I thought the house was about to fall down. Quite strong tremmors here - a bit frightening.

Bisquing with wood - why would that ever be boring? Will you tire of it - I doubt it. Fingers crossed it all came out ok.

Hi Andrew
I bet it was like chimney breast revisited for you, it must have been a bit perturbing, I expect you wondered what on earth wss going on. I'm assuming that one of the other Hollyford residents would have let me know if the driveway is blocked with the remains of my chimney.

Nic's offered me the loan of one of those oil burners that he's importing from Japan. I might give it a go some time. I think he's hoping to use them with bio diesel. It's just a lot of work biscuiting this way, getting the wood, cutting it, storing it, then fourteen hours of stoking for half finished pots, then doing it all again a week later - I'm too old for it! I'll just have to get Matt trained up, then I can sit in an armchair and bark instructions at him.

Of course the thing I really need to do is get back to once firing like I used to. I had a bad firing a couple of years ago with some raw glazed stuff and I lost my confidence. I must try again, I've been meaning to put a few raw pots in with one of my recent firings but haven't. Maybe not next week's firing, but the one after that I'll give it a go.

Sounds like quite an exciting time over there guys! Nice dig into Matt there Doug, poor guy, and just after his birthday too.
Doug do you have to do a lot of dusting off of ash on the pots before you get to glaze?
I too kinda got turned off of single firing, but it really is a nice way to work. I may go back to it again someday. Maybe.

Everything does get a bit of an ashing, but not too bad. If there's a lot it gets wiped off on my jumper, but generally I just give the pots a wipe with my hand as I glaze them.

I used to do all my stuff raw until I used brickclay then I got loads of trapped carbon and gave up. I'm sure I'd be much better at it now because I know how to fire the kiln properly. Becuae my workshop is small, doing all my glazing in one big lump works better than doing a little bit here and there.

Right, keeping up with glazing leatherhard was a lot of work for me. I felt like I was juggling 12 things everyday. I think if I could work it out to raw glaze bone dry then it would be good. It wouldn't be hard in my case as the glaze is the same inside and out. In your case, with two different glazes it'd be difficult. I did bone dry glazing for a couple of years early on. I never had any problems. Doing it that way would allow me to get it all done in a big lump, not some each day. The leather hard way is just too much for me now, and I guess I'm happy to bisque at this point seeing how I've got the gas and all. Well anyhow, I am ready to see some new pots from your kiln.
catch ya later, Ron
ps I looked up the Arthur Frampton bit on youTube.
http://www.youtube.com/watch?v=PdYPoRsNUxM

Yes, the leatherhard thing was a problem for me too, particularly when I only had two days a week in the workshop - lots of polythene sheeting and carrier bags was the only solution.

Just checked out Mr Frampton - haven't seen that for years, Python did some great stuff