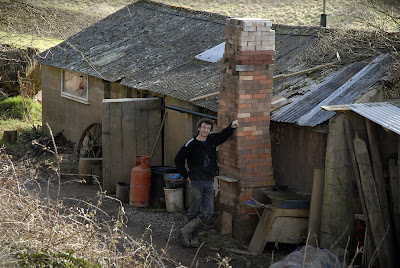 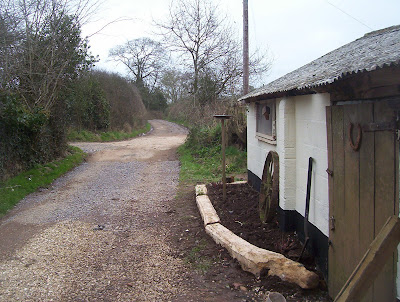 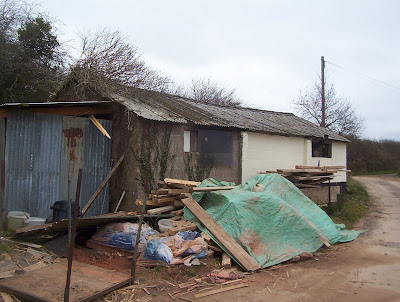 Here's how the place has changed. The top shot was taken last year. That chimney looks really dodgy. When I put the concrete footings in I forgot to take in to account the overhang of the roof, so it had to be built with a curve in it - how dumb was that?!

The last shot shows the end of the workshop that I'm going to rebuild. The window in the unpainted section is in the kiln room. This is going to be turned into a door which will lead into a lovely new woodshed, made from some beautiful old oak that was taken out of one of the barn conversions last week. I used some of the chunkier bits for the flowerbed on the middle picture, the rest will become woodshed and store room and the bits that have completely had it due to woodworm, will be logged up and used for the start of the firing.

The new store room's going to be built on the site of the existing tin woodshed which has served its purpose well, but had its day. It'll be great to have a place to put all my finished work because there's no room in the workshop, it won't be huge but I can fill it full of shelves. All this will have to wait a few weeks.

I gave up making today until after the firing, because it was impossible and I was going mad. The place is full and I need to just concentrate on getting this firing sorted out for next week - it feels like I'm trying to keep too many balls in the air at the moment, so time to focus on the firing then worry about making more pots later. A good decision I think, for my poor little brain was starting to suffer.
Posted by doug Fitch at 16:53

It looks fabulous. A veritable idyll if ever I've seen one.

You'll have to start wearing a smock.

Yes Doug I too think we are in a similar place...too many pots in the shop. Mine are mostly dishes and bakers and bowls and mugs. I am at the end of my making rope right now. A few more pots to handle and then on with a firing.
The place looks great, nice and tidy. I laughed out loud when you commented on your chimney. My father would say it has 'character'. I have some questions about your kiln but will save that for another time.
I am in for some tea. I'm suffering from a major allergy attack which I can usually just ignore. Not today, it's getting the better of me, even after doping up a bit earlier.
See ya.
Ron