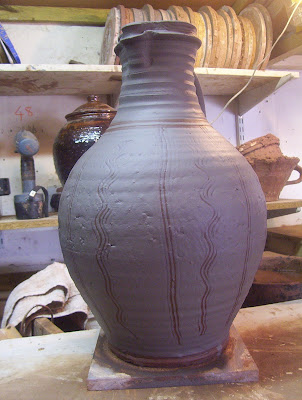 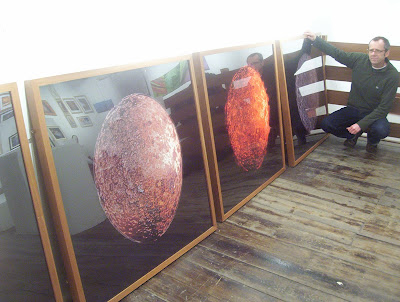 No low flying aircraft today to disturb my tranquility and nobody came to take me away or confiscate my camera I'm glad to say.

I decorated the large jugs today and made some more shallow dishes, smaller than the last ones I made a couple of weeks ago. I'll do some more tomorrow. I enjoyed decorating the last ones so I'll have some fun with these and do them all different. They'll won't be ready to decorate until the middle of next week.

This evening I went to Gallery 86 in Crediton to help my mate and photographer Johnny to hang his prints for an exhibition that opens on Saturday afternoon. I really like these works, they're a series of four huge, computer manipulated images of a bird's egg. It transpired that they were too heavy to hang on the wall as the plaster was too crumbly so we couldn't do it. Johnny's going back tomorrow with different fixings.

My friend Andy Manson has some photos in the show too. He's a very well renowned guitar maker. He used to live up at Hollyford a couple of years ago when I shared the workshop with his wife Debbie. Andy makes the most beautiful instruments for the likes of Led Zepplin and The Police, an amazing craftsman and a lovely chap, it's always a pleasure to see him and Debbie, I miss them being around all the time.

Johnny gave me a disc of images that he's taken of my pots. I haven't opened it yet but when I do I'll put some on here.

Snow forecast for tomorrow, although I'll believe it when I see it, it rarely snows in Mid Devon.

Images:
Jug with combed decoration and green slip
Johnny and his huge prints.
Posted by doug Fitch at 23:21 No comments: 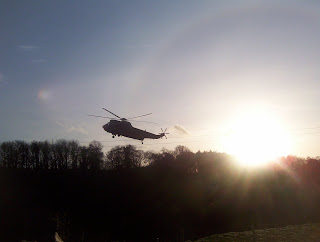 (this is yesterday's blog but I couldn't get on the site last night so here it is a day late)
When I was eighteen my ambition was to become a potter - oh, and to meet Johnny Rotten, so it's been a pretty good twelve months really.
I forgot until I got to work this morning and looked on my calendar, that yesterday was my first birthday. That is, in so much as it was a year ago that I officially left the University's employment and ventured out as a full time potter. Well I'm still here, I haven't starved, in fact I'm over a stone heavier - more to do with packing in the cigarettes and middle age spread than anything else I think, but I've managed to scrape a living for a year by selling the things that I love to make and that feels good. It hasn't been the easiest year, when the van died I couldn't afford to replace it, but I found my feet and discovered the minute detail of the countryside. We didn't get much of a holiday in the summer either, but I'm confident that this year should be better as my competence and confidence has grown and I've at last learned how to make the kiln do the things I want it to do. My head's in a much better place than it was a year ago.
It was a beautiful day in Devon today, warm enough to enjoy a tea in the sunshine while watching a red deer in the field outside the workshop. A huge military aircraft came over really low and the deer was gone. Perhaps I shouldn't have photographed the plane because about ten minutes later a helicopter came over really, really, really low, circled my workshop six times, presumably giving me a good looking at, before flying off again realising that I'm nothing but a harmless recluse in a shed. I probably shouldn't have photographed that either, but they were asking for it with all that low flying stuff. It doesn't look all that close on the photo, but it was just above the power lines - I'm not sure it's legal to fly so low over someone's property It added interest to my day, I hope it did to theirs too.
My mate Simon Hancox. was just on the phone. He rang to tell me he's got a place at Clay Art Wales and Art in Clay at Hatfield. I'm looking forward to catching up with him later in the year, he's a top bloke who I've known since we were at college together back in the eighties when he had a mullet - sorry Simon, but you know it's true.
No pots made today which was a bit frustrating, but a lot of wood cut and stacked in the dry which was important as the forecast doesn't look good for later in the week. I must get some pots made tomorrow though, the illness at the start of the week has set me back quite badly. I hope to fire in a couple of weeks when Matt comes to visit next.
Posted by doug Fitch at 17:59 2 comments: 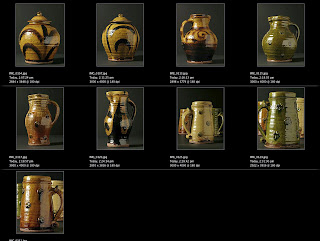 Here are some sample shots sent to me by my photographer Johnny Thompson, of some pots from the last two firings. I'll be getting individual images of them shortly, I'll post them as soon as they arrive.
Posted by doug Fitch at 16:35 No comments:

Well the dreaded man flu has been made all the worse these last two days by triggering a migraine so I've been in a right state and have barely had my head off the pillow until now. It convinces me all the more that these migraines ar sinus related.
So no wood stacking and no potting for two days - what a bore. I'm on the mend now and will be trying to catch up tomorrow.
Here's a shot of some 'double jams' I made last week. They're based on similar items made by Cardew and Hamada in the 1930's, oh I'm so progressive. They comprise of two small jars joined together with strap handles and are an interesting challenge to make, because not only do the pots have to match, but so do the lids. I made four of these, breaking from my obsession with half dozens of items, however I managed to crack one of them, leaving just the three, the component parts being of course, six jars - I should have known better than to try and break the rules!
Posted by doug Fitch at 15:36 1 comment:

A bit on the side Hi there
Last week I had an email from Ron suggesting that I start one of these blogs as the one on my site isn't interactive. I want to carry on with my site based blog http://www.douglasfitch.co.uk/ but I decided I'd post occasionally on here aswell - as if I've nothing else to do with my time than spend more evenings on the computer!
Posted by doug Fitch at 14:12 4 comments: