Here's a snippet of video of the Trilbies' debut at Nic's place this weekend. My boy Luke's the one in the middle. They were fantastic and I was soooooooooooooo proud.

We followed them with a set of Love Daddies songs, many of which we hadn't played since Christmas, so it was something of a memory game and a bit sloppy at times, but it didn't seem to matter. You can see more at Paul's blog here.

It was good to meet up with Nic's kiln builders again and Bloggers Paul and Andrew and my old buddy Simon 'Boris' Hancox.

Lisa Hammond was there as well. I like Lisa a lot, she makes great pots. She's planning to move to Devon in the near future, it'll be great to have her around. Here's a poster for a show featuring work by Lisa and Nic amongst others, at the Leach Pottery. 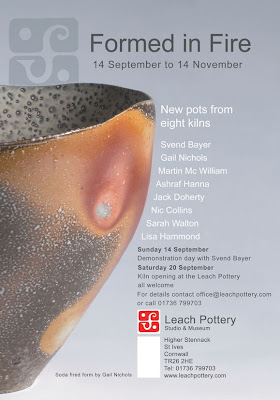 Paul and Simon brought along some fine harvest jugs for the Bideford firing and Andrew kindly gave me these two beautiful pots, fresh from the kiln they'd built and fired during the week. 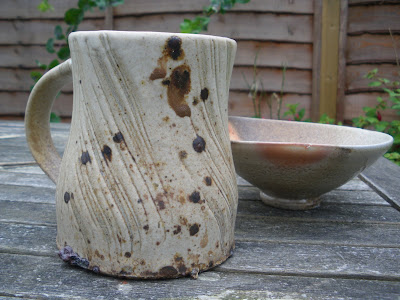 Sadly I wasn't able to thank him properly as I was(and still am a little) delerious with migraine. Not sure what brought it on, too many late nights, too much worrying for a very nervous son, or maybe, just maybe, a bad apple that went into the cider I drank the night before....hmm.

Anyway, I've to go to the workshop later when I feel a bit better, to mix glaze to take to Bideford in the morning. Hannah will be arriving from Scotland by train this evening, I may rope her into a spot of glazing if she isn't too exhausted from the journey.

I'll post some more Bideford info shortly, it's going to be a busy week.
Posted by doug Fitch at 13:17

nice gig..watch the cider doug get ya every time..

Glad to hear Luke did well. it sounded great! Good luck with all of the plans.