Nic and the kiln builders

I had a visit today from Nic and the students from his kiln building course, including Blogger Andrew.

They'd been to Svend's amazing workshop in the morning so I think my place must have been something of a contrast. My little shed was bursting at the seams.

I'll see them all again tomorrow at Nic's party where I'll be playing with The Love Daddies. We played our first gig there five years ago, so it's the Daddies' fifth anniversary gig as well as a shin-dig to celebrate Nic's fiftieth year. I think Bloggers Matt and Paul are coming along too with their good ladies.

Also my old college chum Simon Hancox who will be delivering his harvest jugs for next week's firing, it'll be cool to see him.

Luke, my fifteen year old, has a band with his mates called the Trilbies and they're our support act. It'll be their debut gig so they've been praticing hard. I think they're all a little nervous, but they'll be fine. I'm really, really proud of him of course 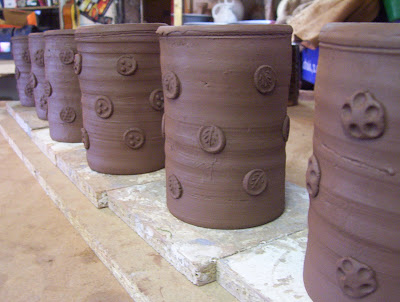 Still not a lot of pot action in the workshop. I got the mugs that I made earlier in the week handled and sprigged(they're upturned in the picture to aid drying). I can't wait to get back into production again, although it won't be for a few days yet.

Next week I'll be spending a lot of time in Bideford, packing and firing the bottle kiln full of harvest jugs.

Hannah's coming on Monday to be part of the event too. 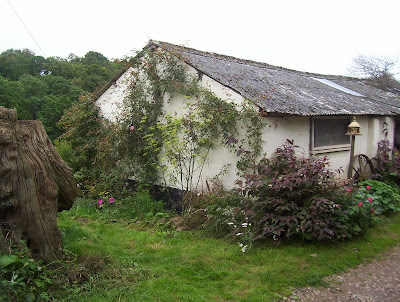 Finally, here's a shot of my little garden. There's been so much rain that everything's grown like crazy.

Happy weekend all.
Posted by doug Fitch at 19:10

Hey good chatting today. Have a great weekend. Awesome that Luke's band is playing too. Hope you get some pics. Give Andrew and Paul and Matt my best.

we'll be seeing new kilns popping up all over then... nice little warm up doug have fun this wkd..

Love the mugs, your garden and, especially, the bit about your son and his band. Not many dads have the honor of their boys being the supporting act at their music gigs. Hope it 's a great time!

Cheers all, it should be fun! Will try and get some photos

I bet your excited about firing up a load of the ole harvest jugs. That should be sweet. The mugs look great!! I have not yet left for China, but I have started blogging. Check it out www.blail.blogspot.com. I think you will like what you see. Good luck to Luke's big gig. I cant wait to hear about it.

Can confirm both Love Daddies and the Trillbies were fantastic - as was the guy with the northhumberland pipes. Everyone now gone home - feeling a bit sadabout it all :(. Might be the beer though... heading back tomorrow. See folks on the 13 in Winchcombe.