Yesterday morning, I met up with Alex and Steve at the workshop to film an interview. Alex is extremely good at drawing the information out of the interviewee - he's done quite a lot of interviews with craftspeople in the past. As a potter himself, with such a pedigree as his, he has an appreciation for the type of works that fuel me with influence and inspiration - he knows exactly which buttons to push to get me enthusing and he pushed them.

Because I spend so much time on my own, I occasionally wonder whether I don't know why I do, what I do - I only have myself to ask questions of myself. It was reassuring to have answers (of a sort), to Alex' questions. My responses made sense to me anyway.

Alex is going to come down for a week sometime to make pots - (then he'll be sick of the sound of my voice), I really look forward to that happening. 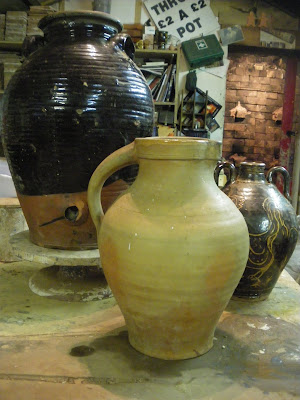 And here are some pots that inspire me in my workshop. The pitcher in the foreground was made at Lakes Cornish Pottery, see how the firing has 'flashed' the body. The large spiggot jar is from Buckley in Wales, what a fine bit of potting that is, it's huge. I guess they're late nineteenth, early twentieth century. The bottle on the right is very much a contemporary pot, Brad's 'confident cock' pot, so named because of the rhyme on the other side of it. This is a poor photo, I've had my photographer shoot Brad's pot and I'll put it on here another day. It's made from the clay in the stream, with black slip, and sgrafitto drawn through to the body beneath - a fusion of Devon and North Carolina. I really like this pot, it reminds me of Brad's visit of course and it also makes me think a lot about how the clays here can be used - I'm mixing a decorating slip from this clay which I'll try out next week, thank you Brad. 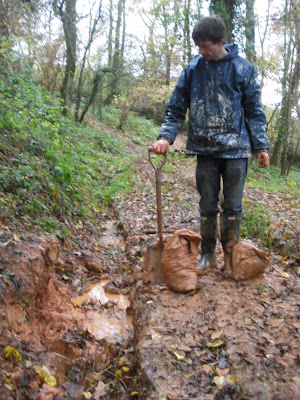 Alex and Steve left at lunchtime for their journey back north to Manchester, leaving Matt and me to go scrumping for clay in the woods. Here's Blogger Matt giving it some spade action - I did tell him it would work much better with two hands, but he insisted on doing it his way.

Today I'm spending the day at home recovering. I'm really tired. Last night I was dozing off, when I remembered that I'd left the bread for the boys' sandwiches at the workshop. There's a little shop in the village, but it doesn't open until after the school bus has gone, so I had to get up and dressed at 1am, then venture out in the cold and dark and wet, to drive up to Hollyford to get it. Feeling sorry for me yet?

I didn't need that: Furthermore, I didn't need the alarm call at 6.45am when Sprat the cat sent one of my large Svend Bayer jars crashing down the stairs. You surely must be feeling sorry for me now? How such a small cat can knock over such a big pot is beyond me grrrrrrrrrrrrrrrrrrrrrrrr!!!!
Posted by doug Fitch at 12:55

ouch...don't guess the pot survived the tumble? Rest up.

What a great dad for going to get the bread. You said something the other day about going home to cook the boys tea. Did you mean making tea for your kids? Is that common where you live? I know it's not something we really do here. Adults in the States have this weird idea that coffee and tea are for adults-even decaf. It's kind of bizarre really. But we think it's okay to pump them full of Mountain Dew and Coke. Yup-a nation of logical thinkers we are.

Ron, it didn't. That's the second to take the stairs route in recent months - time to lose the cats or move the pots!

Sorry to hear about your recent trials. It has to get better. (I'd definitely move those pots.)

I've never left the US and I started drinking tea with milk and honey at age six --and still do at fifty. I LOVE that first cup of the day. Sorry, I don't have an electric kettle, though.

It's almost Saturday! Can't wait to see those pots.

Well here we go, it'll be a happy me or a grumpy me reporting back in a couple of hours

I am sorry to hear about the svend pot. You gotta post some pics os sprat so I can see how much bigger he has gotten. I am feeling sorry for you, but you did just have a great firing, or at least it seems that way to me. Happy resting.