We had great plans to start the firing at 6am - ha.

After packing the kiln on Tuesday, we'd got home late and so, went to bed very late. Matt and I talk the same language when it comes to pottery, albeit that he does it with and Evesham twang of course and we sat up chatting and looking through many a ceramics book when we should have been sleeping. 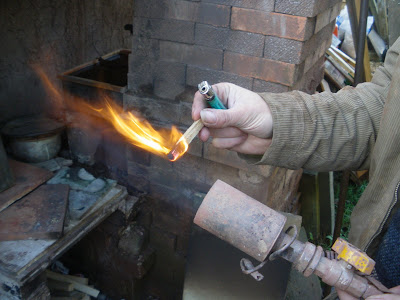 So it was a 9am start - the kiln ceremoniously lit using the 'timber' that Tim and Sue sent. There are some pictures of the firing, before and after on Blogger Paul's site, not quite how I remember it, but they say the camera never lies, so that's how it must have been. 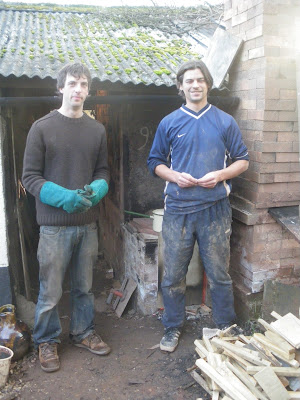 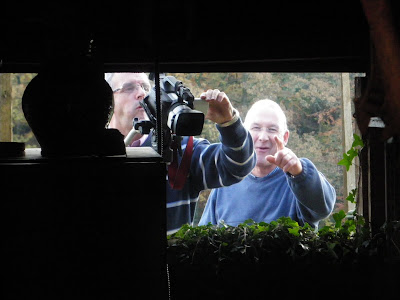 and Alex and Steve arrived shortly afterwards to continue with the filming. Here they're setting up to film firebox two, through the kiln shed window. What a pair of top blokes, I enjoy them being around. They say they've captured some great footage.

We were so fortunate with the weather. The morning had started off misty and as the sun grew brighter, the sheep in the field outside began to steam. It was a beautiful dry day and that meant that Alex and Steve were able to film some of the stunning earthenware colours in the autumn landscape. 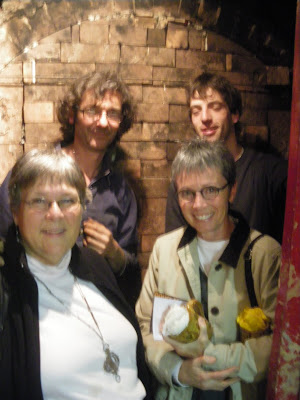 It was a surprise in the afternoon when two of Ron's students from North Carolina turned up. They'd been lost in the lanes and had had some difficulty finding my workshop, which, if you're unfamiliar with the terrain, seems very remote. It was great to see them and to once again, meet some folk who know Ron. It feels that the time will come soon that I'll get to meet the great man himself, I have met a few of his envoys now.

Here they are, in front of the kiln, Susan and Jane. They were last seen leaving my place for St.Ives - the main road to Cornwall is quite a way from my little shed, along some very remote, narrow, winding lanes. I hope they made it OK and that they're not still driving around rural Mid Devon. 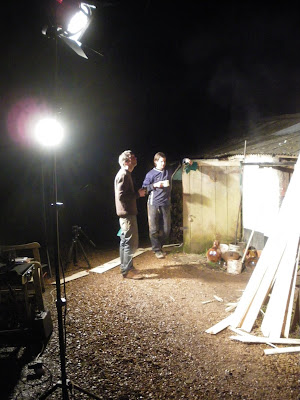 The nighttime was really atmospheric, perfect for filming. Tonight the moon is full, so last night, high in a clear sky, the moon illuminated the countryside, as the owls screeched and twooed. It can be very dark at Hollyford sometimes. Often I've lost my car up there - I never carry a torch which probably isn't very sensible. Anyway, last night we not only had the moon, but all the lights necessary for the filming. It was great to be able to see what we were doing.

Matt and Mark are a brilliant firing team. Hil's still away on residential, so during the evening, I popped home to spend some time with the boys and to cook their tea. It's so good to have those two guys that I can just leave in charge of the kiln without any worries. Mark and I built the kiln together and he has been there for most of the firings I have done, Matt's getting quite experienced at it now - a good team indeed. 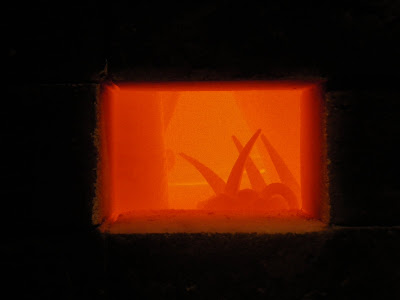 At about 10.30, the relevant cones went over and we stopped stoking. Cones are the spikes that are placed inside the kiln chamber, that melt and bend at different temperatures. After allowing most of the embers to burn down in the fireboxes, we sealed the firebox doors with wet clay and capped the chimney, then headed home.

Matt and I stopped on the way back to take a frosty, moonlit walk through the fields, to one of my favourite panoramic views, which looked amazing and allowed a little time to wind down and cool off after the frantic proceedings of the day.

Now, the wait until Saturday morning. I feel optimistic, I tested all the glazes, dried out the kiln, thought carefully about the placement of the pack and used dry timber that I'd had stacked since June. We fired it with care and considered every stoke.

So everything was done right - however, I've learned never to count my chickens before they're hatched. Saturday may be the triumphant re-stocking of the shelves or the despondent creation of a new shard pile - that's the gamble, that's the name of the game, that's why I do things this way, but time will tell, fingers crossed!
Posted by doug Fitch at 22:34

Hi John - well you know how much I love glazing, what a shame, if only I could get there in time!

That was a great post. I felt like I was there. I hope to see some of that footage someday. Have a good rest.

What a wonderful post! If you ever give up potting you should take up writing! Like Michael said, you made me feel I was there! And it was quite a surprise to see Susan and Jane...I had no idea they were journeying your way.

Isn't it time you journey westward? After John finishes his glazing, that is. ;)

I'll be on pins and needles, waiting to see what Saturday brings.

"I met some pottery students on my way to St. Ives..."

That was brill Doug, I got all excited as I read it. Got my fingers crossed for you. Oh I hope it's good. Are they filming the opening too?

Hey Doug, I've spoken to those ladies on the phone this morning they were having breakfast in
St Ives and will calling in to see me and Marion Later.

Cheers all, I wonder whether my Saturday post will be as long, or whether it'll be just a quick string of rather shorter words!

Paul, that's good. They had hoped to get to you the day before but had run out of time so were disappointed. I did worry for them - the good thing is, round here there's no right or wrong side of the road, on these lanes it's just the middle of the road, so I guess that's one less thing to worry about.

Sounds like a wonderful firing! The post really made me want to take a woodfire workshop soon. I so enjoy the communal aspects of it..and the fire...and the pots...and the food...you know how it is. Hope Saturday brings lots of treasures.

It is a good way to do things Jerry, even though the results are unpredictable - but that's the point I guess. It's another one of those potter's privelige things, being able to enjoy this stage of the process. And the food, oh yes, note the big pan of curry slow cooking on top of the firebox behind Matt and Mark.

well it's saturday but you know how far ahead of the game i am so i guess it'll be tomorrow before i catch any firing results, plus your kiln looks massive when you blow up the shots and i just saw the pot of curry , nice one doug!