In the museum on Tuesday, it struck me how much variation there was in the colour of the clay bodies used to make those old pots and how different raw materials can tell us of a pot's regional origin. Potteries historically were established where there was a good seam of clay and where there was a ready supply of fuel for the kiln, be that wood, or coal, or both.

Of course, the firing affects the colour too and earthenware, being porous becomes ingrained with a patina of grime over the years, ageing and changing(one of its beautiful qualities).

Some time ago Russel Fouts, who makes beautiful pots and also writes a really interesting blog called Pots I Like, brought my attention to a project by a guy called Niel Tetkowski, assisted by a lady named Carla Flati. Samples of clay were sent from all over the world, blended and then fired to make a meter wide disc called The World Mandala. I find it fascinating, check it out and see all those colours. 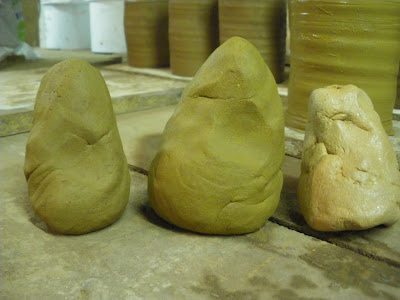 When I was at Art in Clay this summer, a couple from Croyden, Tim and Sue, gave me a lump of clay to try. It had been dug from a graveyard. I guess I should have made with it yesterday, it being Halloween.

Here it is in the centre of this picture. To the left is my Hollyford clay and to the right, some clay Michael Kline sent me a while ago. I kept it in its raw state because it is such a beautiful colour. I like to think I own a little chunk of the USA. 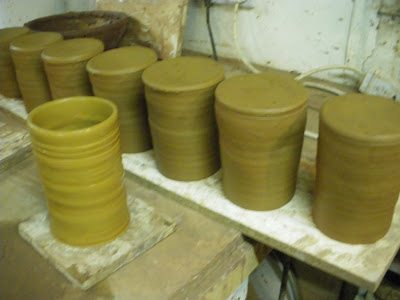 I finally got around to making with Tim and Sue's clay today. It threw very nicely, silky and smooth and quite similar in its properties to my Hollyford clay. The Mankard in the foreground is made from it, the upturned ones behind are my clay. It'll be interesting to see how it fires. I've a little bit left for handle making. 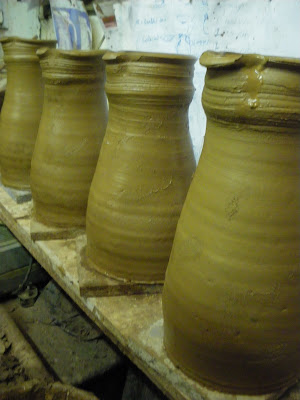 It was a bit annoying seeing what I'd done to that big pot in the bisc kiln when I opened it this afternoon. Biscuit firings need to rushed through a bit as I'll be glaze firing a week on Wednesday and still have quite a few big pots to bisc. The rest are on top of the kiln drying tonight to avoid any more mishaps - silly me. It was interesting to see one of my big jugs in section however, as I would never have cut one in half to look. They're thinner than I'd imagined, sometimes my pots are quite heavy. 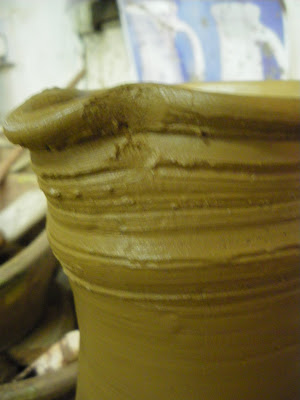 I was lucky enough to be able to handle this pot. What struck me as fascinating was that the 'roughly' inscribed lines on the top section, the piece of clay that stops the water slopping out, were applied quite consciously as a decorative feature. Behind this clay section the join to the main body of the pot had been smoothed over so 'perfectly' that the join was undetectable. It's such lines and marks that I'm always very aware of when I'm making pots. You can see them in this rather blurred picture of the neck of one of today's jugs. 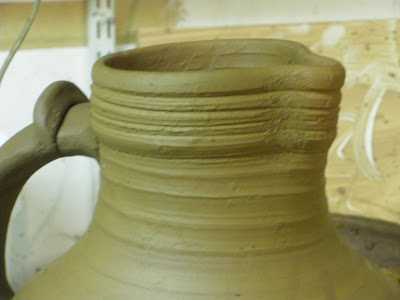 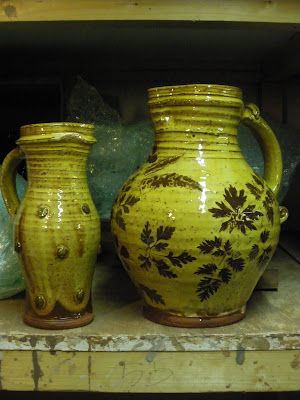 And here are a couple of finished pots. Click on the picture to see how these lines on the neck, add to the overall decorative effect.

Well that was something of a ramble, I hope it made sense to somebody, if not, please just humour me.

Goodnight all.
Posted by doug Fitch at 23:08

I agree that mud is a glorious thing. Isnt it amazing that a potters career, and life depends on mud? I sometimes think it is crazy that I have made connections all over the world because of the mud. Doug, you have some really awesome mud at hollyford. I am proud to say I have seen it, and dug some myself. I really like the leaf pots. Keep up the good work!

Hi Brad
And I'm proud to say I have some pots here that you made from it! I'm enjoying your adventures out there in China

I very much enjoyed your "rhapsody in mud" post, all the photos, and the interesting info (the World Mandala! Can't wait to see that progress.) Ramble on, Mr Fitch!

Hey,
those lines give the slip and glaze some thing to play over as do the rough bits in the clay body. I see what you mean about it all.
Those 3 lb jugs have nice shapes. I've got to make some jugs this week.

Doug, I just came out of my workshop happy with my days work on my jugs, then I've just seen these and realise I've still a long way to go.

Thanks for the mention of the Mandala.

Nice jugs! I think only potters can get excited by up close pictures of rough 'mud'. It's great to use clay with such character.

Carla mentioned to me when she was processing the clay for the mandala that she was amazed by the colors of the clays that came in. Beyond the usual reds, buffs, greys and oranges, she had purple, green and 'hot pink'!

The Mandala was finished in 2002 and is on display at the UN in NY.

You can go see it there.

To Russel, many thanks for the info!