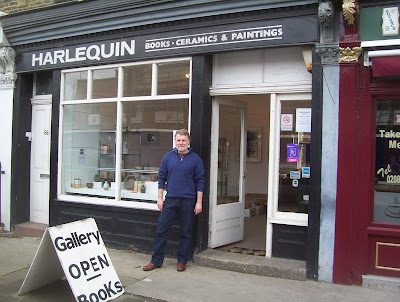 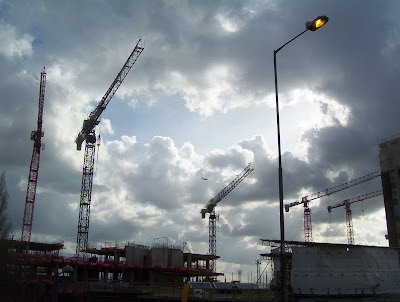 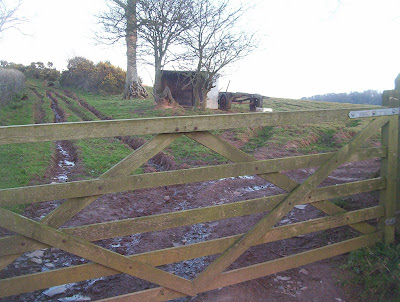 All delivered and back in Devon, Frank you're a star.

Here's John Rastall outside the Harlequin Gallery. It was good to see John again, what a lovely chap. I'd never been to his gallery before. He's an interesting exhibition on at the moment of Japanese ceramics. He also has a great collection of books on ceramics and art, some of which are quite rare and all of which are for sale - very tempting.

The other pictures are of cranes and planes in Staines and Cheriton Fitzpaine's lanes.

They're only on there to show the contrast between London and where I live. Also of course, just so I could write that stupid sentence.

What a relief to have all the pots delivered. I don't enjoy driving unless it's round our leafy roads with grass growing down the middle, so Frank took a huge amount of stress away from me by doing that.

I guess it's just what you get used to, I've lived in a few cities in my life and never thought twice about driving midst the craziness. Exeter of course is a city, but it's a very small one and hasn't the intensity of traffic of many other cities. Back in my Liverpool and Derby days, the prospect of driving down single-track lanes with high banks and trees either side such as those round here would probably would have freaked me out. Perhaps I just need to try and worry less and drive more before I become a recluse - perhaps I just need to try and worry less generally. Perhaps I just need to become a recluse.

Luke's got to go to the orthodentist tomorrow to get his brace tightened poor lad. We'll have a good time in town beforehand, grab some breakfast and wander round the shops for a bit.

The rest of the week, collecting wood, mixing slip and glaze and preparing everything in readiness for an intensive period of making in a couple of weeks time.

I'll take next week off so we can do some fun family stuff and visit my parents. I'm really looking forward to that. Hil and the boys break up for their Spring holidays on Friday. We'll go to my openings too which will be both exciting and terrifying. It'll be great to catch up with a few people, including my blogging buddies. I've never met Andrew although we've known each other for quite a while on here, so that'll be cool. I'm chuffed to bits they're going to come along and support me bless 'em. I missed the last opening in Winchcombe because I got so stressed out about it I wound up with a migraine.

When we get back after all that, a kiln load of pots to make for Clay Art Wales and Bovey Tracey in not enough time - and so it starts again. I do love it though, good job really.

Happy Monday everybody
Posted by doug Fitch at 21:57

ahoy from the states. yes, wet and slippy is the way to go! love your pots mate, love em. i grew up in a big city but after living in the "country"(small town) for 8 years, i would never want to go back. there is someting to say for trees, grass, and stars. i passed through exeter a few years ago either to or from bovey tracey to visit david leach. beautiful part of the country!

perhaps it was on the way to penzance, i can't actually remember!

I saw a crane at the weekend - fortunately it was the flying kind up at Lakenheath Fen!

Seems like it might be a bit of a bloggers meet-up on Friday? - looking forward to it. Might have to go to that Harlequin Gallery now... rare books are almost as tempting to me as pots.

Oh well, it's 7am and the tractors in the yard next door are up and running - who'd live in the country eh?

Have a good week!

I don't usually read these things in the morning but Paul is away so I'm having breakfast over the computer oh and I slept in after the alarm went off. I utterly hate the idea of driving through cities. Even down to Dumfries is enough for me! Wish I could get down to your exhibition this friday but there is utterly no chance. I'm away to Harrogate on saturday morning, speaking of which I should not be sat here plonking away on this, better go fetch my bke and be off. Take care.
h

Are you going straight to Winchcombe on Friday or coming here first? I will be finished at work by 2pm so will be home all afty. Looking forward to seeing you all.

Hello all, Hi Brandon. David Leach was a lovely old chap. His son Jeremy's still running the pottery, I haven't been up there for ages. True enough, it is a beautiful part of the country and definately true enough, wet and slippy is the way to go. Country life is good, I wear socks and sandals almost every day, how cool is that? - don't answer! I guess we're probably just a bunch of hippies really. Good luck with Harrogate on Saturday Hannah, I hope it goes well for you, I look forward to reading all about it. Andrew, Matt, see you there on Friday. I hope we'll be there before seven but can't leave until Hil gets home from school. The books at the Harlequin are good and sensibly priced check them out here http://www.studio-pots.com/Books.htm

There are a couple I fancy myself if I sell some pots.

Hope Monday was relatively painless, have good a Tuesday all.