What a crazy couple of days it's been, I haven't had any time at all to update this blog.
Today was supposed to be firing day, but it's done, a day early.

Monday and Tuesday were concentrated glazing sessions. I really don't enjoy glazing at all and the sight of a whole kiln load of biscuitware is pretty daunting, so it was a case of just getting stuck in until the job was done. The workshop was chaos, pots on every surface, in every stage of production. I'd got large jars and bottles that had to be decorated midst all the glazing, the first shot's of one of the large bottles with combed decoration through freshly applied slip. 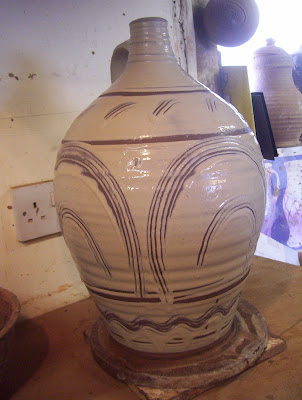 Mark came up on Tuesday evening and we packed the kiln and bricked the door up, finishing at about eleven thirty. We managed to get a lot of pots in, it looks to be a great pack.

Yesterday was supposed to be a day for getting in wood in readiness for firing but as we had decided to fire, I went to Tiverton to collect the wood first thing and lit the kiln rather later than usual. Because of the late start, we finished at about three thirty this morning instead of the more regular eleven o'clock. Getting up again at seven, ready to take Hil to work and Luke to the dentist wasn't easy.
It was my Dad's birthday yesterday so I made this jug for him - he'll be thinking 'oh no, not another jug'! I like these fat, softly thrown jugs and I've an idea of how I'm going to decorate this one for him and if it works how I can see it in my mind's eye, it should be quite tasty. My poor parents have got a house full of my pots from the last twenty plus years, I hope one more won't hurt. 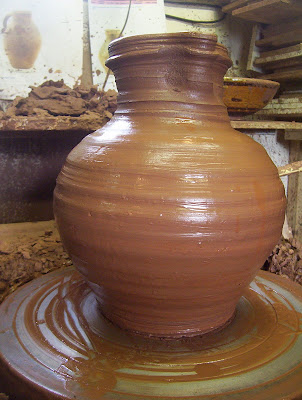 The firing went brilliantly it seemed, with a long, slow climb to get the final cone over. The last picture shows two cones in the foreground and the third cone bent, which told us that we'd reached our optimium temperature.

Now, the wait until Saturday morning and the unpack, which will be either good - or not so good - I do feel quietly confident that it'll be good though - let's hope so. 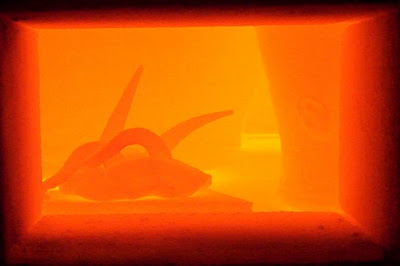 Way to go! That's a sweet jug, but explain me something, do you call the slipped pot with scratched through slip deco a jug? And what about the pot for your father, is that a pitcher or a jug? Thanks for hooking me up with the right lingo, gringo.

Hi Michael
I've caused the same confusion before with Gay. The big pot with the slip, I'd call a bottle and the one for my dad I'd call a jug although I think you'd call it a pitcher, which is an expression used here too. The big bottle is based on old cider jars which adds an extra element of confusion. It's all a bit too complicated, maybe we should all try communicating in French? Looking forward to that mug, cup, can.

Man I feel like such a slackard! I totally put my firing off until Monday and here you are finished already. Way to push through, can't wait to see the results. I'll be checking in while I am away.
Watched a documentary on The Who last night and saw your pal Johnny Rotten as well as Glen Matlock.
I'll be cozying up to Jane Hamlyn this weekend, picking her brain and pinching ideas.

That jug looks like it's on the edge between staying up and collapsing - is that how you've thrown it? Or is this the same way you normally throw them ? Will be interested to see how it comes out.

Looking forward to Saturday now - got to get through Friday first (Crackerjack at five to five... )

Look at that spy hole pic, wow! I need a wood kiln, I keep getting cravings! Don't you let your wood stand in a neat pile for three years before you fire with it?

HI doug,
`i was going to come and say hello today, but caught up in things. Hope all is well, have been checking the blog to keep up. do you fancy a pint?
cheers
roop

Monsieur Douglas, the jug is pushed to the limit. I'm really inspired by old nineteenth century Fremington and Lakes 'pitchers', where the clay is stretched to its maximum, I love those kind of characteristics in a pot - a record of the simple marks of making - keeping it fresh. It's also my little double fingered gesture towards the sanitised industrial whitewares of Stoke on Trent.

Hannah, sadly I don't have the space for long-seasoned neat piles of wood, in my dreams, although my woodshed is still half full of lovely dry skinny softwood that I stacked a few weeks ago. The hardwood is generally neatly stacked in the back of an Audi estate for the few hours it takes until it's all burned. However, my plan for the late spring is to build a much bigger and more efficient woodshed where I can keep loads and loads of wood for ages and scavenge every old pallet from every skip in Mid Devon. Ah, wood kilns, no sleep for hours, burned kneecaps and black snot. My mate Marky Mark burned himself when we were firing last night - on a microwave curry, ha ha.

That's Roop from the excellent RAMP by the way, check them out www.rampceramics.co.uk