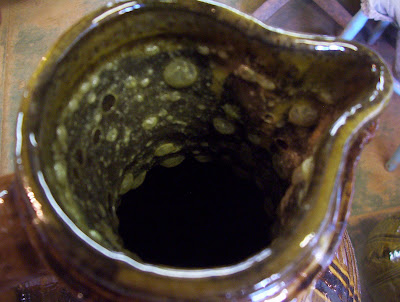 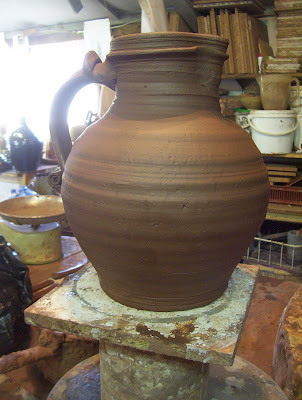 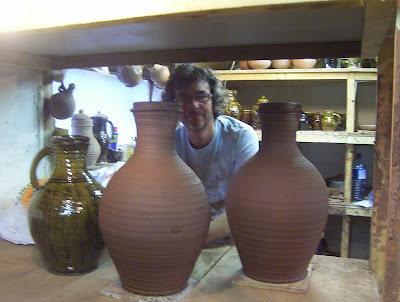 Well the firing wasn't that great really. I stupidly used an old batch of glaze inside some of the pots which bubbled and blistered. It was made even worse by the fact that a shelf near the top of the pack, broke during the firing, bringing pots downwards onto pots below and backwards knocking the stack behind against the back wall of the chamber - lots of pots stuck together.

Oh well, I could either get stressed and depressed, or take it on the chin and make some more. So it's a working weekend. The new pots are better than the ones they're replacing so that's a positive. Some huge jugs made today, more tomorrow. Also got the handle on my Dad's jug.

Can't believe I used that old glaze, why hadn't I thrown it away? What a plonker.
Posted by doug Fitch at 19:09

There are some nice pots that you've photographed. I've had bubbling like that when i put slip over glaze. But I'm not familiar with your glaze.

My neighbor just blew up her cone packs and has to unload the kiln and reload. bummer. I've got to run over and lend a hand. I hope I have better luck with my kiln, this coming weekend...

What a pain in the butt, fingers crossed for you.