Hi folks, thanks for your votes :)

Well I'm back home in Devon after a busy week of travelling. 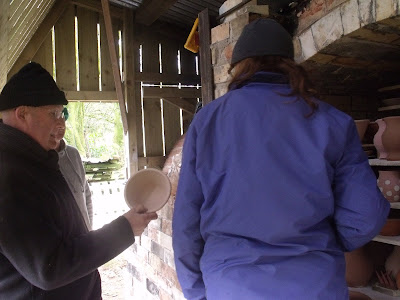 I had a great time at Hannah's place and it was lovely to see her and Alex. I hardly took any pictures while I was there(she worked us too hard so I didn't get a chance), but there are plenty on Hannah's blog. Here's one of Alex and Hannah packing. 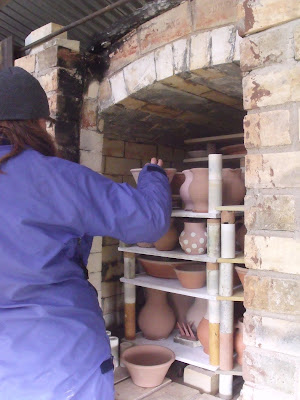 The chamber gobbled up a good number of pots. 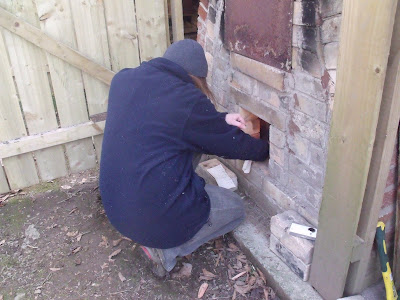 Hannah lighting the kiln. Her firing turned out well and she was happy, so that's fab. Unfortunately we had to leave before it was unpacked, but check her blog to see the treasures from her chamber. I got home late on Thursday night. I wish we didn't all live so far apart. I'll be seeing Alex again soon, when we fire my kiln in a few weeks.


On Friday, Frank came to stay. As well as being a traditional signwriter, he's an illustrator and puppet maker. Thirty years ago, when we were teenagers, we went to see a Jim Henson film together called The Dark Crystal. To celebrate the thirtieth anniversary of the film, it was being shown in Exeter, as part of the Animated Exeter Festival. There are some great pots in this movie! Yesterday Wendy Froud, the woman who made the puppets for the film, presented a workshop, showing how she makes her characters - it was fascinating. 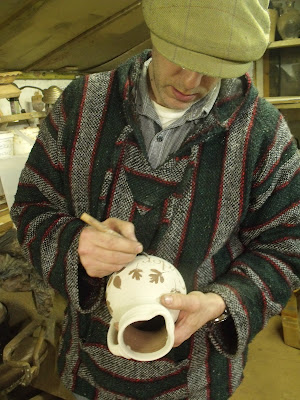 While Frank was here, I took advantage of his great lettering skills and got him to sgrafitto some text on to a couple of jugs that I've made for an order. 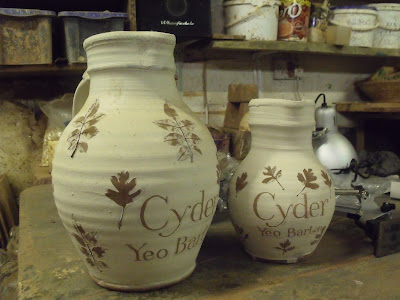 These will be glazed yellow, using my traditional glaze.
A busy week ahead, I've a lot of pots to make. Bye for now
Posted by doug Fitch at 10:04

THE DARK CRYSTAL!?!?!!? I LOVED that movie, I can't tell you how many times I watched it. Nice reminder, I may have to find it and watch again! One of these days, I'm going to come over and fire with you and Hannah, that's on my list of things to do before I die :)

Hey, I know it really helped Hannah to have you and Alex there. I thought the pots came out looking great. Good luck getting ready for yours.

Tracey you make sure you do that, you're always welcome here. Yes, great movie, organic and hand crafted

It was great Ron, we had such a cool time. I spoke with H on skype earlier and she showed me some of the pots, they look fantastic and she's really happy with them. Thanks for the good luck wishes for my firing - I'm pretty worried about it tbh, there's a lot hangs on this one.

ha looking TDC up now can you believe I've missed that one don't know how but was probably broke!!! so glad you made the trip up to H's would love to have seen some vid though....oh well just have to imaging the clowning around then....

Man I love The Dark Crystal, I never knew it was that old! gosh...

Sounds like a seriously busy weekend, those jugs look lovely!

Beautiful work as always...
What a combination of talent!

Thank you, my chum is such a talented draftsman :)