Just in from drama rehearsal. Following the fun of the pantomime back in January, I agreed to take part in the village summer play, so I'm attending rehearsals on two evenings a week. It's quite a big commitment, I've got a lot of lines to learn, so there will be much talking to myself in the workshop during the next few weeks, while I try and drum the script into my brain. 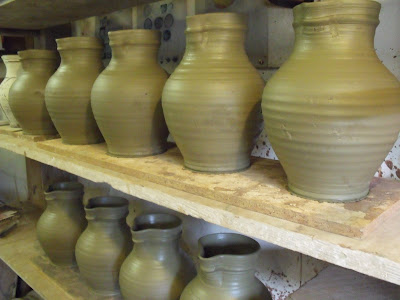 I've been making 3lb jugs today from clay, dug from the field opposite the workshop. 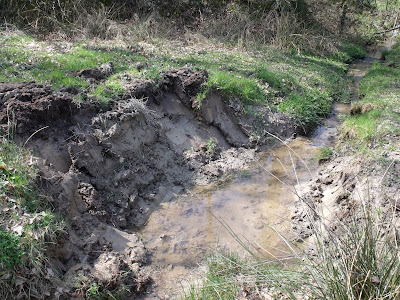 My friend Matt kindly took a digger down to the stream and dug me out a tonne of this wonderful earth, before his dumper truck got stuck in the mud and had to be dragged out with a tractor. 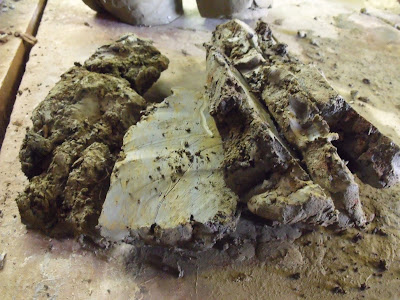 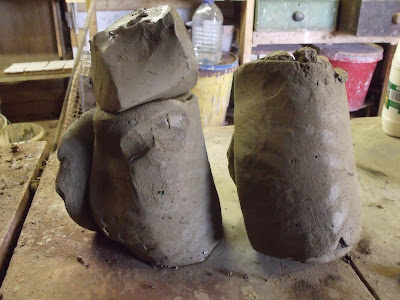 After much wedging and kneading and picking out of small sticks and stones, this is what it becomes, a beautiful smooth and wonderfully plastic clay, ideal for throwing. It even has an amount of naturally occuring sand. Although it's grey at this stage, when fired it becomes a pale terracotta colour. I think it'll make for much brighter, less sombre tones in my pots. 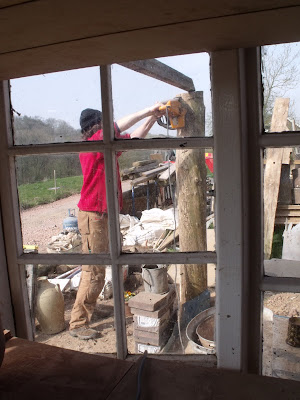 Different Dave has been up to the workshop during the last two days, cracking on with the final phase of building work. 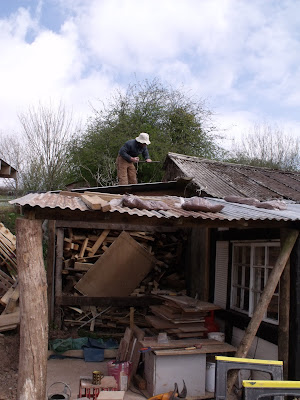 The old woodshed's coming down, to be replaced with a new one, with doors and windows - how posh it's going to be. We're raising the kilnshed roof, replacing some damaged roofing sheets. 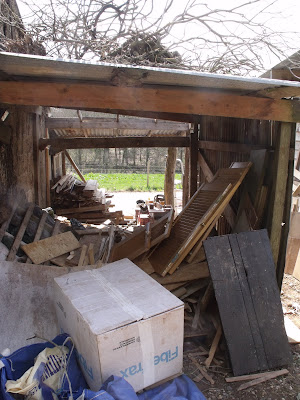 It's one of those projects that looks a terrible mess for a while until it all starts to come together again, particularly as we're making the whole thing out of scrap and scavenged materials, so there's 'useful' stuff everywhere at the moment. Once it's finished, it's going to be really pretty.

Well that's it, more pots, more shed tomorrow, right now it's time for bed for me and my tired little arms.

Goodnight all
Posted by doug Fitch at 22:27

The place is really getting a make over. Nice to see that fresh clay and the jugs. I'm busy, busy too at the moment. We must try and catch up soon. Look for me on Skype when you can over the next few days. I'll try and remember to stay online.

Oh everyone seems to be digging fresh clay nowadays, I am definitely going to try it as there is a pile already excavated around the corner from me. good luck with the remodel project.

wow so much going on i can't keep up, will have to come back for a good read late! yeh guys we should get 'all' in on a conference call, that'd be fun!!!!

For someone who was rather anxious about performing in public at Rufford, you're doing great!! Workshop stuff, both buildings and pots, is looking brilliant. Any progress on the 'convenience' side of arrangements or is that what that hole in the field will double as???

Will look out for you guys on Skype. Linda, yes, go for it, there's nothing quite like using clay from where you live. Karen, will be up and running by WPA time, promise