Here are some pots I made on Monday from the woodland clay that I dug a few weeks ago when the film was being made. I sieved all of the bits of twig and grit and root out of this batch, so it just contained the smaller grains of naturally occurring sand - a whole lot smoother than the stuff I usually use. 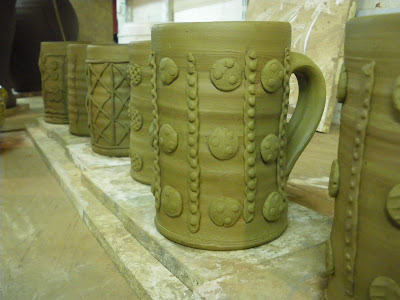 It was delightful to throw with, really responsive and plastic. Because of the lack of hardcore, it made for pots at least a third bigger than I would be able to make from the same weight of my usual clay. Hence these are neither mugs nor tankards, they're somewhere in-between. I decided to take some time experimenting with applied decoration, including the use of some roulette wheels that I made ages ago - they're what makes the bobbly bits on the horizontal strips of the foreground mug. 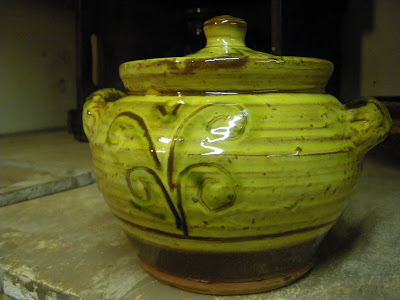 Paint:Mud:Wood is still on for another two days. I hope to be there tomorrow, but just for a change, the car's gone wrong again, so I've to take it to town in the morning to find out the bad news about it, with the hope that I might get back to the gallery in time to catch up with my friend Johnny who is going to be there documenting the show. 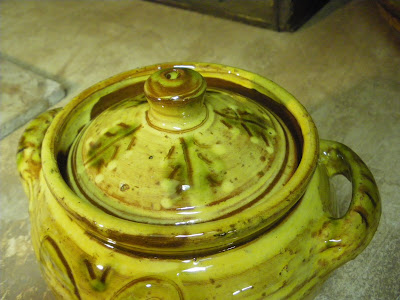 Today I had some more pots from the kiln that I was unable to get out in time for the Crediton show, including this little cook pot that I was really pleased with.
Posted by doug Fitch at 21:23

They gotta be Tugs for sure. Cup of tea and a ciggy ones or maybe a whole pack of biscuits if you don't smoke! Like them ones alot.

Your exhibition looks very inviting. I want to sit down at the table and have a potters supper. Some good beef casserole in those pots and a few bottles of red wine...some pottery buddies to enjoy the meal with..mmmmm

Liking the new mugs - picture the pub in the first film of Lord of the Rings and I reckon they'd be right at 'ome - mind.

Those are great Doug. Like the deco. Fancy. That cook pot's fine too, that handle place is nice. Glad to hear you're liking your new footwear.

it IS a pretty pot, and you have to have good boots for winter...

what is going on with bloggy today everything's different?? anywho have fun day hope car behaves and is a simple fix...sweet mugalugs...

I am really glad to see you using the clay in the back. I think that is some of the best clay I have ever seen that is so easily attainable. I would really like to have one of those mugardsmade of local clay for myself. Maybe we could arrange some trade or something soon. They seem about my size.

Hey Ang! I noticed everything is different today whats going on ??????
I just took a pic of one of my casseroles this morning and I thought it look nice but now i've seen this cooking pot I feel like a novice.

ah the big guys 'll do that to ya.....I'm sure its a great manly pot you made in fact i'll check it out right now... yeah use the available source doug how cool, dig it, throw it, bake it...ang

Hey this is a fancy comment page. What's up? What about Mugards?

Got some new wellies?

Really like the deco on the "drinking vessels" and the handles look sweet too.

I just remembered that some potters I know used to make some smallish tankards and they called them "tankettes" I guess that's how you spell it. Like girl tankards. (no offense anyone)