What a mad week it's been, late to bed every night. Luke finished assembling his sketchbook at about midnight last night - it looks great, loads of photos, drawings and research.

Hil's inspection went really well today so she's taking it a bit easier this evening. They were only told that they were going to be inspected on Monday, so it's thrown upon them without much warning. Fortunately she's very good at keeping her paperwork in order, so the last few nights she's been checking through everything just to make sure nothing had been overlooked. All was good. It's stressful though, I can't see why anybody would want to teach. 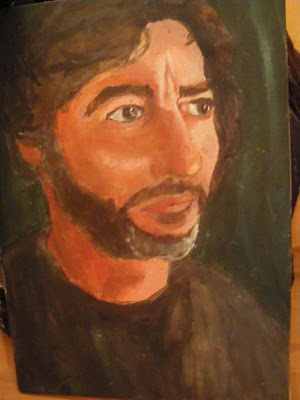 Guess who? This is Luke's other GCSE coursework that he submitted today along with his model. He did this a few weeks ago, when I was bearded. He's worked really hard at his painting techniques. This one's acrylic on canvas, he did some great watercolour landscape work too.

He'll be sixteen on Sunday - no wonder there's so much white hair in my beard. 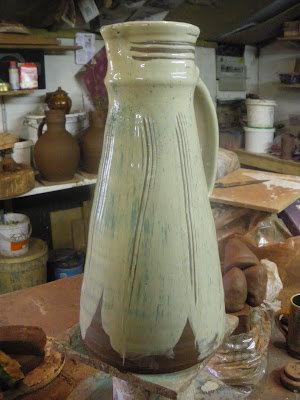 I've not got much made today as I had admin stuff to do this morning before walking to the workshop - just a couple of harvest jugs. The walk gave me time to think about how I was going to decorate the big jugs I made earlier in the week. There are three more that had their first coat of slip today, they'll get a second coat in the morning.

These three are finishhed and drying on the shelf. This one has a white slip, which is mottled green with copper carbonate, which is sprinkled on while the slip is wet. 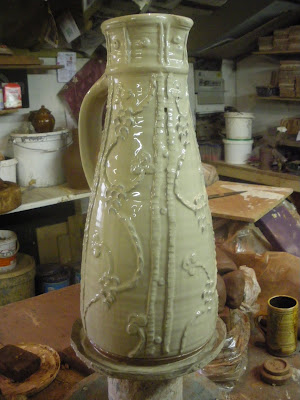 The applied decoration on this one.... 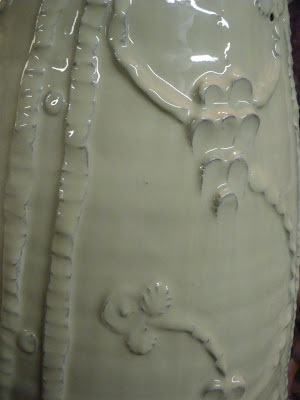 will break through the surface of the slip on its high points. 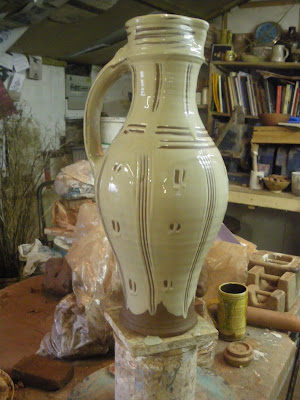 I've done this decoration before, but have yet to get one through the kiln the way that I want it - maybe this time. 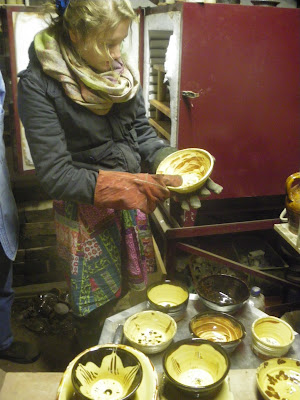 Jessica came up this evening and unpacked her kiln load of pots. We put them in the electric kiln because they hadn't been dry enough to make it into the last woodfiring and it's still a few weeks until the next wood kiln burn up. She had some fantastic results, I think she was really happy, I certainly was, I'm proud of what she's achieving. It's so satisfying seeing how her skills are coming along, particularly the way that she's mastered the concept when decorating, of taking some very basic elements and using them in a simple but clever way. There was a lot of good stuff to learn from that batch of pots, so I expect she'll be back next week with lots of ideas about where to take it next. Very pleasing - I guess that's what makes people want to teach - ah, I get it!

Happy Friday all
Posted by doug Fitch at 22:45

Well glad to hear Hil's review went well and that Luke, boy, he's really got the touch.
Funny we must be on a bit of the same wavelength as I was planning on doing some copper carb wash over some bisque before applying the glaze. The dusting looks like a great idea, gonna steal that! Good chatting yesterday.

Oh, and glad to see Jessica's pots came out well. Good for her, you're a super teacher I bet.

her work looks fantastic, and so does your son's and YOURS is stunning!

well, it's quite evident that your family is full of artists! I'm interested in seeing that pitcher with a second layer of slip on it and how you build on it with that.

As usual, I'm loving the pitchers!It's too bad our kids don't know each other. Wesley is a great painter and musician just like Luke. They would have a lot in common and she turns 16 in April. Funny how parallel their talents are. The portrait is fantastic. I should see if Wes will let me post some of her drawings.

well done jess and the boss of course lovin those jugs mr fitch...one day i shall come and fetch one!!

You're surrounded by so much creativity, you must be oozing it out!! Oops, sounds odd, but meant well! Luke and Jess are in a good place, well done.
Must find out what happens to the jugs that don't work out?
Happy Birthday to Luke

Blimey O'Riley, s'all looking bootiful. What a clever boy Luke is, I love his painting of you. And Jessica's pots look pretty special.
Hope you're well x

I remember how long it took me to throw a decent bowl - I think Jess is doing fantastically - obviously a natural.

Will we see you at Nics? I guess I'll stay for the party - dunno - are you playing or perhaps see you before?

Hearty Congratulations to you all! I feel like a dog with 2 or 3 tails wagging in appreciation when looking at your blog as there are so many wonderful things going on. Thanks for posting the photos of your tall jugs going through their various stages.

That painting is amazing! What a lad your son is. Lovely jugs too, I don't need to ask whether you were wearing your dust mask when you were dusting the copper carbonate around do I? Of course you were, they don't call you Doug health and safety Fitch for nothing!
x

Yes, I'm really proud of them both :)

great work jessica! nothing like unloading a kiln. it's nice to see all the variation in the designs on your bowls.