Not much blogging action so far this week. I've not been up to the workshop in days, my head's been in a bit of a funny place - time of year and all that.

Instead, I've put my time into revamping my slide show ready for my demo at the Dacorum and Chiltern Potters Guild this Friday. I feel much better this evening, so it's off to work in the morning. Jessica will be there tomorrow, so I'll have some company.

Incidentally, my computer's been on a go slow and keeps crashing, so if I owe you an email, please forgive me, I'll be on the case asap. 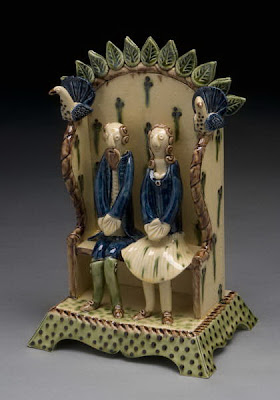 My older son Luke is currently working on a GCSE art project. His brief was to choose an artist and create his own interpretation of their work. He chose to work in clay and based his studies on my good friend Paul Young's modelling, such as the piece in the picture above. 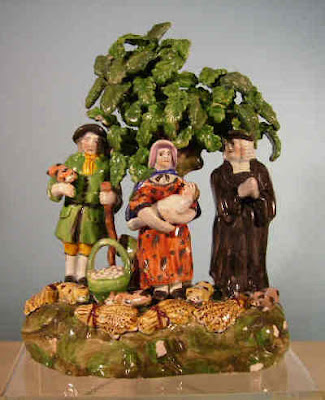 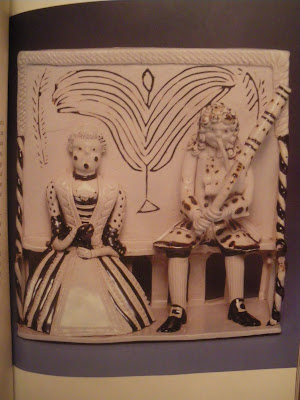 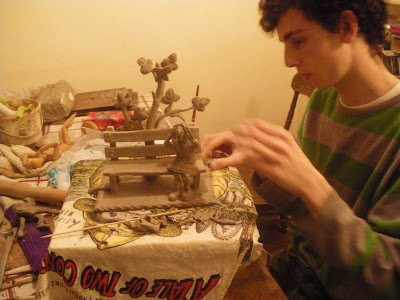 So Luke did some research and has made a modern representation of a pew group, in a style influenced by PY. 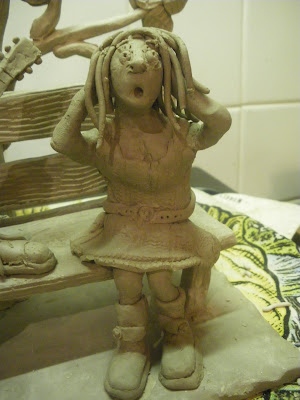 As you can see in the image, the original features a couple sitting on a pew, with the man playing a woodwind instrument to the woman. Luke decided to put a twist on this, with the woman clasping her ears with an expression of startled alarm.... 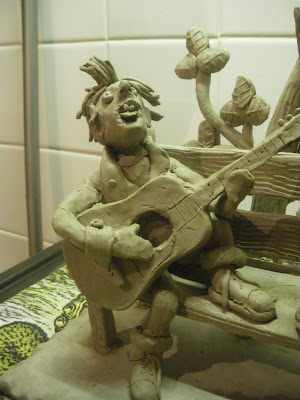 while the man serenades her with his guitar. Is this a scene that he's witnessed at home perhaps? 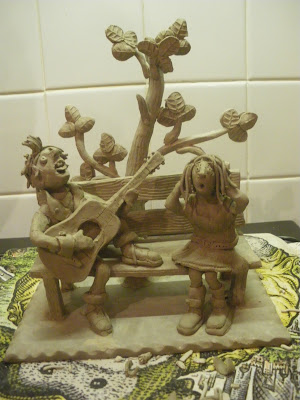 I think he's made a cracking job of it, I'm very proud of him. All we have to do now is get it to the workshop and through the kiln in one piece - oh, and sort out the glaze chemistry, eek.
Posted by doug Fitch at 23:41

Luke,
That looks so awesome man. The people are nice and over expressive. Just the way to draw attention to it. You have some potter in you from your old man I suppose.

I LOVE Luke's work!! I'm curious, does he like clay? My daughter can't stand the feel of clay but when, on rare occasion I can get her to do something, it's brilliant! She would much rather be playing her music or writing, so that's fine with me.

What a fine piece of work,I hope you get top marks for it Luke,All the best of luck Doug for your demo and talk. Let me know how you get on, Nic.

Luke that work is superb, much better than that old stuff your dad keeps making.
Great people A**.

Hey Doug I was in the Dacorum guild, some 25 years ago and went to a demo then. Good Luck.

Well done Luke!
All the very best to him, that's taken alot of work and thought.

What a great piece!

OH MY GOODNESS your son's piece is brilliant. I wonder if he will take his study further?

cracking indeed...any wensleydale in the cupboard?? rockin tree too!!

Luke, that is really amazing. Wow, great job. Yes, PY should have to step it up a notch now! Don't let Doug turn it brown. Ha, kidding there D.

All power to your elbow Luke. I taught pottery in secondary schools back in the days when it was O levels and A levels. I think that is a delightful and humourous piece of work. Keep it up.

That is utterly brilliant, I love it! Mr F senior make sure you get those glazes right cos that is just fabulous. I'll buy it!

That's great, I can see it as an animation a la Wallace and Gromit!

All of the above and more.....you've really got something there!

Those are rediculiously groovy.. you should be proud of such talent..
peace, Kai n Dan