Well that week just flew by. Nic's course was excellent and everybody left equipped with the basic skills required to make bigger pots - all that is needed now is lots of practice. Unfortunately I don't have time for making whoppers at present as my priority is to make small pots for an exhibition in Tokyo in the spring, but I'll get on to it once I feel confident that I've enough stock behind me. 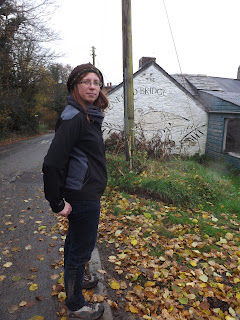 After the course we headed down West, over the border to Cornwall and to Wenford Bridge where Frank lives. Wenford was also where Michael Cardew lived until his death in 1983, here's Hannah outside his now derelict pottery. 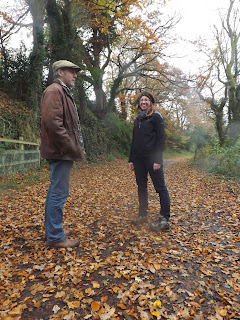 On a walk along the Camel Trail in the rain. 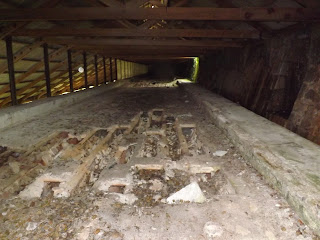 Alongside the trail runs a vast building, which was once a china clay drying shed. It seems to stretch for half a mile or so. The floors had underground heating, which would have dried the clay slurry. Imagine taking a bath in those when they were still active - lovely! They're now derelict, but very exciting for Hannah and me as we ooooed and aaaahed over the number of dense firebricks that were there in the redundant hypercourse - just think of the kilns that could be made. I think Frank thought us to be a bit nerdy, but ah well, we probably are. 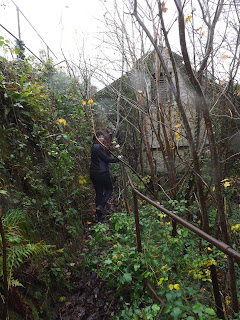 We weren't really supposed to be in there, it was completely overgrown. 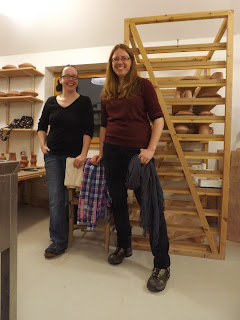 On Monday, we carried on down to St Ives and to the Leach Pottery, to visit our new chum Mandy who is studying there for a month. I'm sure she had two legs when we were there - very strange, too much kickwheeling maybe?! 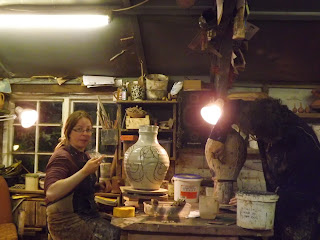 The rest of the week was spent in the workshop, hiding from some of the craziest weather we've had for years. The Westcountry was flooded, the roads chaos and the village cut off. Hil couldn't get to work, or Joe to college. 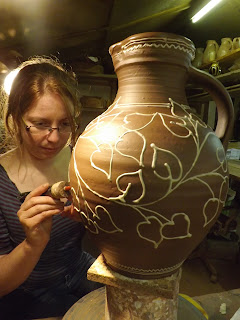 Poor Hannah was stuck here for an extra couple of days as the ballast under the railway tracks was washed away in Exeter so she couldn't get home. Here she is decorating one of my jugs, which I hope to have for sale on my web site when it's launched in a couple of weeks. 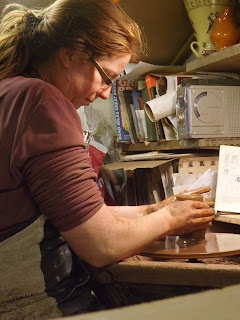 And here she is on the wheel making some funny little people pots, based on old medieval jugs.

It was lovely to spend some time together, I'm not sure when our paths will cross again, next summer probably.

That's all for now, off to town to the pictures, a wet weather pursuit, more rain again today. Happy weekend everybody.

Vast is right! Can't imagine. Hope Hannah is now home safe and healthy. Glad you had a good visit!

It was great to have you both here. Emily had a blast, and Freya had a new audience for her monologues. I just wish it could have gone on for longer. Again, soon !

ah- you and the wonderful Hannah all snug with the family. I hope you are all safe and warm. great pots and love the Doug/Hannah piece.
XO-M

Oh Doug, that did make me laugh!! It does look like i've lost a leg!! I never was any good in photos, but that's a new one!! :D
Loving the pots as always :) & looking forward to the next meeting already! x

Well it was a lovely time I had. I hope we can do it again some time though as you say I don't know when that will be.
Thanks for having me.
hx

Looks like good times! Wish I was along for the ride, I miss you guys.

I love seeing you two work together. Like Adam, I wish I was there.