Pots by Ray and friends

I knew Ray Finch through his pots and in that respect, I knew him very well indeed - I've lived with them since I was eighteen. I thought you might like to see a couple of the treasures that I own. 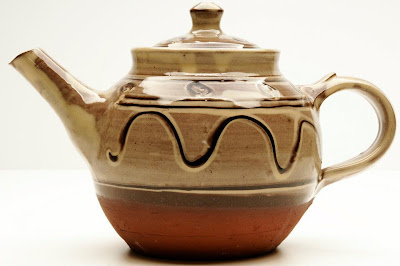 This teapot was made by Ray at his son Joe's pottery in Wales, in the 1990's. It is unusual as it is a slipware pot - Ray had made the transition to stoneware in the 1960's, but revisited the materials and techniques, I would guess, for a bit of fun. His are the most fantastic teapots. 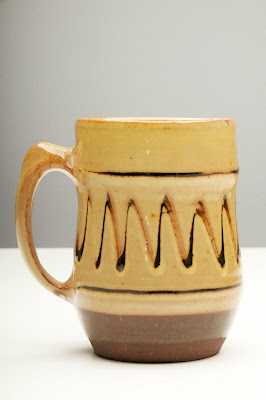 This tankard was made in the 1950's. I think this is really clever potting, as it stays true to its traditional roots, but also has a clear sense of the style of that era in design. 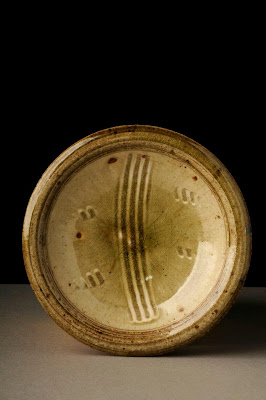 The next two pictures are pots that were made by dear friends of mine who worked with Ray at Winchcombe Pottery in the 1970's. This small dish was made by Alex McErlain in the 1980's.... 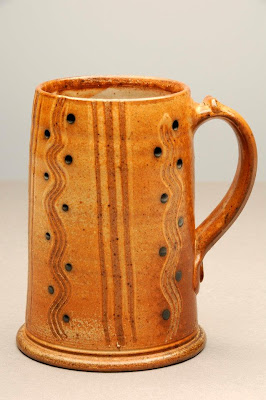 and this tankard was made by Dan Finnegan last year. He gave it to me when Hannah and I visited Virginia back in the Spring. An example of the Finch influence, spread across the Globe.
I'm not saying this very well, but the point I'm trying to make is that I connect with these chaps because we understand the certain kind of pottery that Ray made - they are pots that are a part of each of us. I'm pretty sure that if it hadn't have been for Ray, that we would never have met. I have a lot to be thankful to him for.

That teapot is stunning. Thanks for sharing.

Yes, that teapot is really sweet and that tankard does have a modern sensibility to it. All of those are wonderful pots. Thanks for sharing.
How'd the panto go?

Amen, Doug. We have a beautiful temmoku teapot of Ray's that Dan gave us as a gift years ago. And then a couple of smaller pieces we bought ourselves at Winchcombe. I do love that slipware teapot. Never saw one like it. I think it really is remarkable that we all share these threads of the lives of the potmakers like Ray who came before us.

Thank you all. I don't think you can beat Ray's teapots. Panto opens tonight Ron - eek

I have a few of Rays pieces thanks to Alex for introducing me to Winchcombe. I met him once, very briefly. So glad that he lives on through his work.

I love the slip decoration on the teapot!! Such great functional art!

Beautiful teapot, I love its balance and simple design!