Hello all and thank you for your kind comments on my last post. Of course I'm really chuffed about it, it's a great thrill to know I have a pot in a museum - for ever and ever - hey I can give up now.

Nothing much has been going on here. The boys finally went back to school on Monday, the first time since a week before Christmas as their school was closed because of the weather. Hil had been off too as her school was closed as well. We'd all started to suffer from cabin fever, it's been frustrating and demotivating, going to bed too late and then getting up too late.

I got the car home from the workshop today for the first time in a week - it's been stuck there in the snow. The council at last gritted the lanes out that way today - until now it's been ice with compacted snow on top, only accessible by 4x4 or tractor. Hil's car was out of action for a few days too as the diesel had frozen - thankfully it's running again now.

In the workshop, the bucket of brickclay that I left soaking down a few days ago has frozen solid, so I made pots from smooth clay today - I found it so much easier to use than the coarse and gritty body I usually use and I enjoyed its silky smooth qualities - I think I'll make some smaller stuff from smooth clay in future.

The frost's never got so far into the workshop - all my waterbowls in the wheeltrays are solid ice, it's not good. I lit the burner briefly, but it filled the place full of smoke until the flue heated up, so I had to have the doors and window open - hmm. The flue needs to be longer - I have another section outside somewhere, but I can't find it because everything's covered in snow and I can't remember where I put it - doh!

There's more snow tonight, but I think it's going to turn to rain later - hopefully that's the end of it. Devon's on the national news as I type - poor folk still stuck in their cars on the outskirts of Exeter.

It has been beautiful walking to work the past couple of days and I've seen stuff that's going to end up on the next batch of pots - I'm going to be doing a lot more walking in the forthcoming weeks, it keeps my old body and mind fit and exposes me to the wonderful world of nature that is so intrinsic in my work. It's a while away yet, but I'm going to enjoy watching much of the Spring on foot this year.

I'm really behind with work now though, I'd hoped to have the workshop all sorted last week and to have started making pots on Monday. As it turns out, I've still a lot of sorting to do, but it'll have to fit in around making pots. I got a lot of racking fitted today and I'll get some more up tomorrow - enough to hold a good batch of pots so that I can get making.

I did get a couple of pots thrown today - a little jug for an order and some goblets for use in the pantomime that I'm performing in. It opens a week on Friday, so some force drying will be necessary. Some learning of my lines needed too! Another benefit of the recent walks is that I've been able to stand in the deserted orchard and practice my part, performing to miles of empty, white countryside out to Dartmoor in the distance. Had anybody have seen me they would have sent for the men in white coats I think, but the advantage of the countryside being covered in snow, is you can see there's nobody about for miles.

My camera finally bit the dust this week - I'm expecting a new one in the post tomorrow, weather permitting. 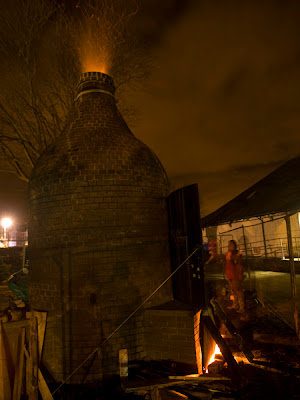 So tonight I'm putting on some great pictures that were taken by a professional photographer called Dave Green, who I met just before Christmas at the Burton Art Gallery bottle kiln firing in Bideford, where he documented the event. I love this picture, it's so atmospheric. 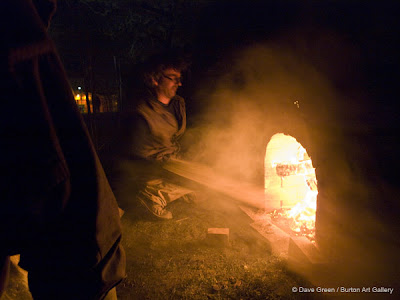 A bit of stoking 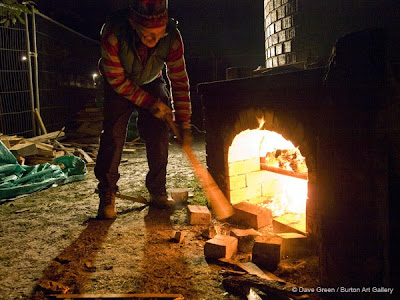 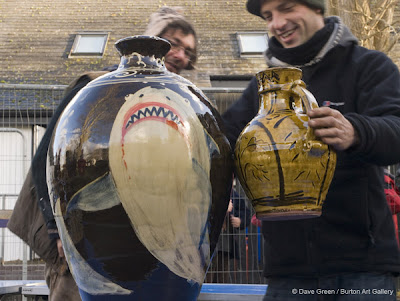 Matt and me and the glued together pots

If you follow this link, you can see more pictures from the firing .

If you click the link, you can also get to see so beautiful photography on Dave's blog.

Well that's it for now, hopefully I'll be back tomorrow with fresh pictures, of freshly made pots, from a freshly bought camera.

Those photos of the firing look really exciting. I would have liked a closer look at the Harry Juniper jug. I have never actually seen his work apart from a few small photos in books. I should be out the studio now but I am dragging my heels as it is still snowing out there!

boy, I would like a bottle kiln, holy cats that is BEAUTIFUL---and what became of the Siamese twin pots? together forever or delicate surgery?

You know, Doug, I complain silently to myself when I go out to my 45-degree F. studio. But ... I have to say, my water's never frozen. Y'er a tougher man than me. Come on, Spring!

Hi Margaret.Harry's work's amazing. A friend of mine has one that commemorates the abolishion of the slave trade - it's an unusual juxtaposition, beautifully exectued. He does a lot of life drawing, so his drawing skills are right up there. Here it is in fact:
http://www.lowfarm.net/Studio_One/Harry_Juniper.html

Hi Gary - they actually pulled apart quite easily, although they were both scarred and would need some grinding - I gave mine away. I want a bottle kiln too - maybe next year!

I'm not tough Hollis, just cold! Got the burner in today though - toasty :-)

Hi Doug, I hope you've warmed up today!
Thanks for the link to that Harry Juniper jug! What a stunning work or art. Amazing in fact. There was one of his jugs in a local auction last year and I left a bid on the books but didn't win it! It was titled 'The Joy Of Pigs' and have some wonderful Gloucester Old Spots on it (pigs and piglets). I got outbid and it was bought by a pig farmer (true story). I do have two goblets of his bought at a car boot sale for 50p each!!!!
Take care and keep warm!

I have central heating and I still cant motivate myself to get into the pottery this week just because it 'looks' cold.Respect to you Doug. Really enjoyed reading your blog recently.You've inspired me to make my own.Now I suppose I have to think of something interesting to say!

I recently came across your blog and have been reading along. I thought I would leave my first comment. I don't know what to say except that I have enjoyed reading. Nice blog. I will keep visiting this blog very often.