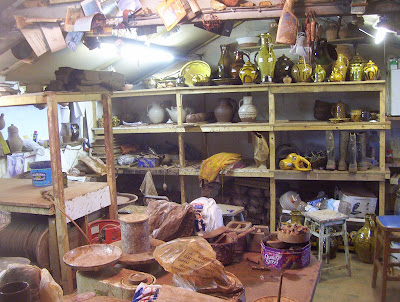 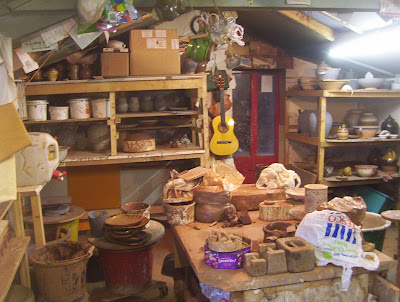 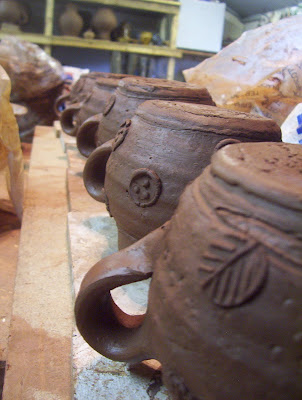 Here are a couple of shots of my workshop. Believe it or not, it's pretty tidy and organised at the moment. One day I'll try and sort out a video stream.

It's always good to see Nic, he's been a great support to me since I set out doing this crazy potting thing and his work's been a major influence too.

It's the folk festival in the village this weekend so there are lots of grey beards and hats around. The pubs are full of singers, fiddlers and whistle players. We're going to open the garage up tomorrow and see if any of them might fancy taking a bargain-priced second home with them. My mate Paul's going to bring some of his wooden pieces down too, we'll see what happens.

I've been to the pub tonight to look for Rob, a storywriter who occasionally comments on this blog, hopefully I'll bump into him tomorrow.

I've got a gig tomorrow night with the Love Daddies in Exeter, so won't be able to join in with the festivities here.
Posted by doug Fitch at 00:23

looks like there's been an earthquake in your studio Doug, hope you get it all cleared up nicely.
h

But that is cleared up!

Ahhh! Happy clutter! Looks a lot like my office except where you have clay, I have stacks of paper! Surprisingly, I know exactly where to find whatever I need! The guitar in the bg is an especially nice touch.

But but but it's tidy! It's just a bad picture.

Beck, we're so useless at promoting the Daddies. We've got gigs on video but never get it together to put them on youtube. We don't even get it together to publicise our gigs, in fact the last two gigs, we got emailed posters from the bands we were playing with, we printed just the one copy out, which we stuck on the practice room wall. Oh well, at least we knew where and when we were supposed to be playing even if nobody else did.