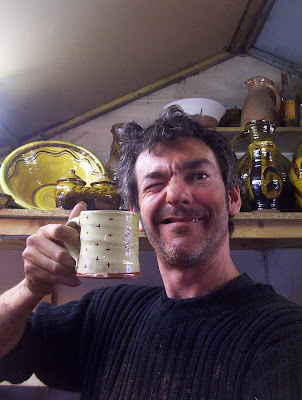 A package arrived at the workshop yesterday containing a lovely little mug from my mate Ron in the States. Thank you Ron, I love it, I'm drinking a cup of tea from it as I write this.

It's been a bit of a disrupted week. Monday the boys were off school so I was home with them and Wednesday I helped my mate Frank move house. Later today we're away for a weekend break with Frank and his partner Emily in a caravan in North Devon, so I'm at home preparing for that, doing some odd jobs and avoiding the characteristic terracotta tan that I get daily at the workshop. I'll take my sketchbook and plan the frenzied burst of pot making I'll have to wind up to next week. I've not really found my rhythm since we got back home from London, but making the big jugs in the picture has been good for my head and helped to get my confidence back, which in turn will stop me flapping around like a headless chicken. 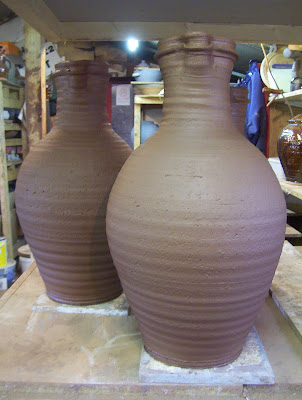 My show in Winchcombe finishes this weekend, thank you to everybody who visited. Thanks too to Matt and Sarah who came all the way from Northern Ireland to my London show last week. 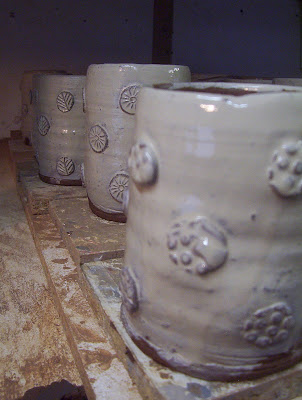 Yesterday I decorated all the mugs that I made earlier in the week, then threw the big seventeen and a half pound jugs. The jugs are under wraps now to keep them damp until Monday when they'll have their handles applied. I want to get all the bigger pots made at the beginning of next week.


On the walk home last night I noticed the tiny flowers of the wild strawberry in the hedgerow. I'll look forward to their fragrant fruits on my trapses home later in the summer. 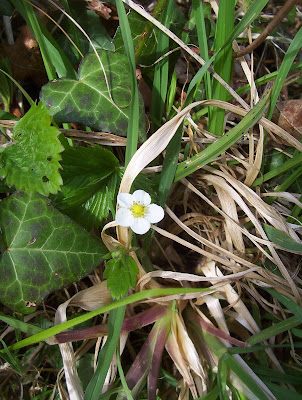 That's about it for now, join me next week for jugs, bowls and platters. Have a lovely weekend everybody, bye!
Posted by doug Fitch at 09:28

Seventeen and a half pounds!!!!!!!!!!!
You're just doing that to wind me up.
More press ups for me before I get anything like that weight of clay on my wheel!

Boy those are some big jugs. I'll just make three five pounders and a 2.5er. Will that count?
Glad the cup made it. I figured you didn't have any mugs with weird birds on them.

So when are you auditioning for the part of Captin Pugwash !!.
If I could spell oohh are Jim Lad, I'd write it.
I found a very nice Cabbage on the edge of the farmers field the other week when I was taking the dogs for a walk. I told Marion, so the next day we went to the field, but before we could get to it Cadbury had pissed on it.

Paul that's too funny. Maybe it'll rain and wash it off. :-)