Put my handles on today. Scrolls at the bottom of the handle were typically applied to old North Devon Harvest Jugs, the likes of which have been a huge influence on my work, so I've been sticking them on mine of late. 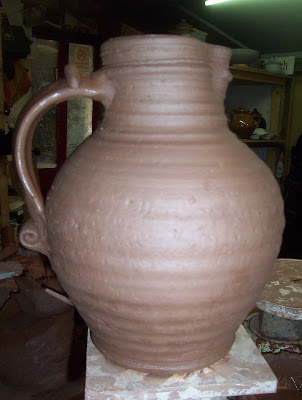 There's an event at Barnstaple Museum later in the year, I've more to report about this, but it'll have to wait as it's the middle of the night here. Below is the Museum press release.

An opportunity to see Exeter Museum's fine collection of North Devon Harvest Jugs, and a fresh look at the work of the Fishley family of potters over the last 200 years.

An exhibition in collaboration with the Long Room Gallery, Winchcombe.

Harvesting was thirsty work, and many men would take cider or other drink to the field in a bottle or jug. At harvest home, it was customary for most farmers to give their labourers a harvest supper with plenty of drink, so jugs were needed for the table.

In Devon potters could be sure of selling drinking vessels and they made special orders for farmers. Treasured in their families, many have survived. The making of such 'personalized' jugs may have begun in the 17th century, and by the early years of the 18th the old motifs had been discarded in favour of prancing unicorns, hunting scenes, leaves and flowers and rhymes about 'good ale' or beare'.

Goodnight!
Posted by doug Fitch at 00:36

thanks for the image doug, I'm going to practise practise...8lb's for jug that's about 4kg...decent effort! holds a large drink eh..

Thank-you for my little jug. It's debut was to serve up tonight's custard which it did with great character and aplomb.
See you soon.