It's been a bit frustrating since last time I blogged, as I had a really nasty migraine attack last week that knocked me out for a couple of days. It's taken a little while to regain the motivation and inspiration, but things are starting to take off again now thankfully. Here are some pictures of stuff that's been happening in recent days. 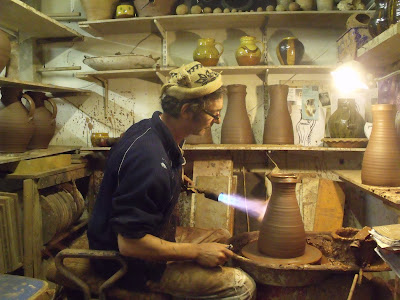 I made half a dozen of these tapered jugs, each a slightly different shape and with a variety of styles of rim. Here I'm giving the jug a good blast, prior to taking it off the wheel. The two small yellow jugs on the shelf, just above my lovely hat, were made by Michael Cardew at Winchcombe Pottery in the 1930's. 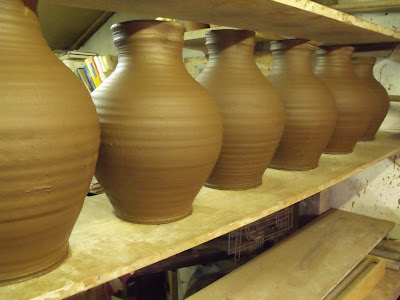 These are eight pound fat jugs 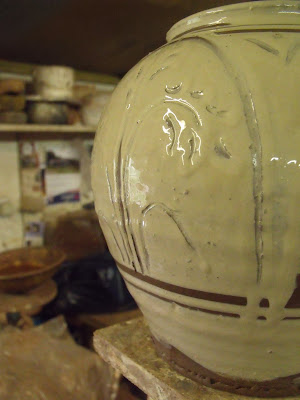 Some wet slip decoration on a jar 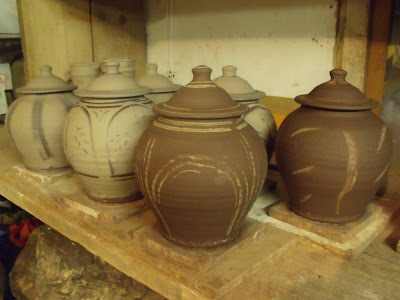 Here it is, middle front, dried out, alongside its siblings. 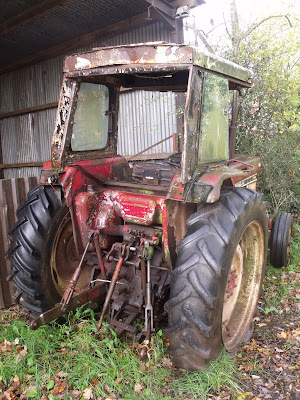 And to end tonight's brief trip to Hollyford Pottery, a picture of a tractor on Hollyford Lane, ooar ooar.
Posted by doug Fitch at 22:35

I hope the hat protects your wee head from migraines :) Gorgeous work, Doug!

No, but it protects me from Hil - she won't come anywhere near me when I'm wearing it! :)

you make the nicest jugs there are. can i ask why you use the torch on them at that stage? is it to stiffen them up so you can lift them off? they are wonderful. and i dig that cider tankard too!
-andy