I got back in the groove today, using a blend that included the new, gritty brick clay. It took a while to get going which was really frustrating, because I was feeling greatly inspired after my museum visits of recent weeks. The clay was too soft for the 8lb jugs that I was trying to make. When the clay's too soft, it's impossible to throw it thinly enough(Apart from lids and footrings I don't turn my pots). The forms lack tension and the clay looks overworked. So I decided to prepare a pile of clay for use later in the week, which I've left on the bench to toughen up, then I cracked on with making some smaller stuff instead. 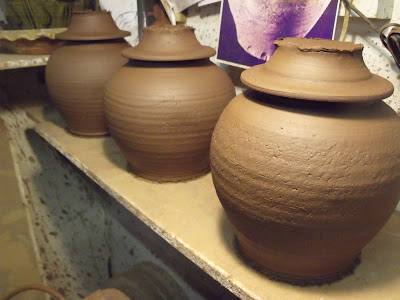 These are some 3lb lidded jars - I made six of these. The lids look a bit odd because they have yet to be turned and have the knobs thrown on - I'll do that tomorrow. You can see the gritty nature of the clay in this picture. I'm looking forward to seeing what it's like under a thin slip. 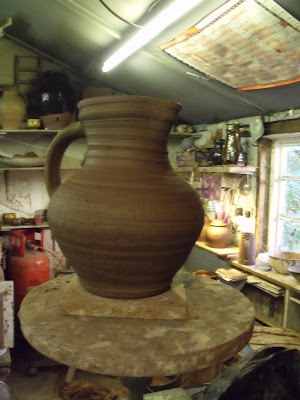 This funny little jug is made from a blend of Hollyford field clay and brick clay. It's fantastic to throw with, beautifully plastic. I'm excited about getting this working for me. I hope to have a good percentage of the pots in the next firing made from this clay. 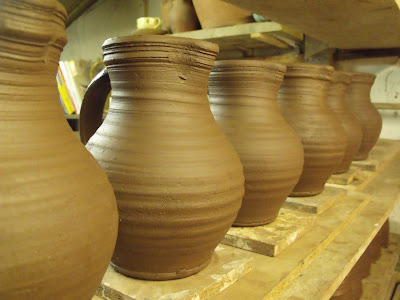 Here are some more 3lb jugs that I made on Saturday. I made a batch of tapered 3lb jugs today, but don't have a picture of them, I'll put one on here tomorrow along with a shot of the jars with the lids finished.

It's great to be making again, better still to be enjoying it. For a while I wasn't enjoying my potting at all. I guess that's the problem of doing the thing that I'm passionate about as a job - when it's good, it's really good, when it's bad, it's desperate. Sometimes it's hard to sustain and forcing it only makes for laboured pots that I'm dissatisfied with and that really, really gets me down. But things are feeling good right now. I like this time of year for making, the autumnal, earthenware tones in the countryside are stunning and when I light up the wood burner in the morning, it doesn't take long to get it toasty in the workshop. I even quite like the dark evenings now that the clocks have changed.

I've spent a lot of time building sheds and sorting out the workshop in recent months rather than making pots, which needed doing. It's been so worthwhile because it's a much easier space to work in now. I needed a break from making, but now I'm really happy to see wet pots on the shelves again and pots that I'm pleased with too. More lidded jars to make in the morning, woohoo!

lovely jars- and yes it is wonderful when it is all working- and terrible when it is not.
That is some mighty craggy looking clay.
It will be interesting to see how it turns out.

The clay looks lovely, still alive, I can almost feel it from this distance. So glad to read that you are all inspired again and are "in the groove".

I guess that a lot of traditional potters have worked on their pots through part of the year, then worked on growing crops on the land or have gone fishing for the other part. It is quite a nice thought really, that potting might be as seasonal as growing fruit or vegetables, and as natural as breathing...

I enjoyed catching up with your last few posts too. Some nice photos of the pots in the Ashmolean. What a lovely museum that is...

So glad you are in the groove again. I think a break makes better pots.....Cant wait to compare the just thrown lids to the turned ones.

Hello all
I'm really hoping this clay's going to fire ok because I've made quite a few pots from it now. It is pretty craggy indeed, not quite as coarse as the brick clay I used to get from the Exeter pit before it closed, but craggy enough if I add enough to the mix. It's true enough Peter, I'd not thought about potting being seasonal, but you're right, that was the way it was. I'd better work hard all winter, then I can take the summer of - ha ha :)

Lids done Anna, they're made the same way as the jar that you have, thrown upsidedown, then flipped ove, turned and the knobs thrown on.