Home again after a brilliant, long weekend in France. I feel absolutely exhausted and have spent much of today sleeping - surprising as most of the weekend I've been sitting down in a darkened room, but we kept long hours and I didn't get home until the early hours this morning, so there's my excuse. 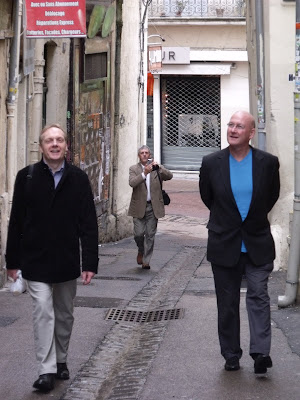 These are the guys who took me there, John Davies on the left, who edited the film, director Alex McErlain on the right and Stephen Yates, camera man, taking up the rear. Huge, huge thanks to these chaps. 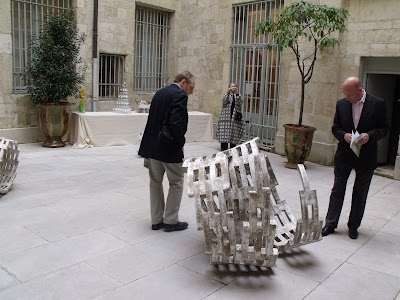 On the first evening we went to an exhibition of ceramics and glass at the Montpellier Musee Languedocien. In the background is Marta, who travelled with us on the plane to France - some of you may know her from the CPA shop in London. 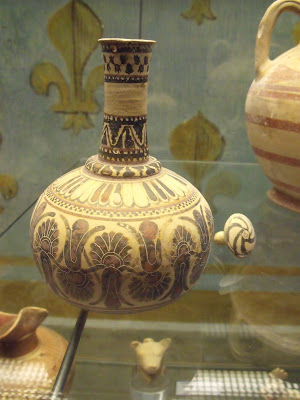 The museum was full of amazing, ancient pottery. I had photographed a lot of it, before a very polite man informed me photography was not allowed - so you haven't seen this picture ok?! 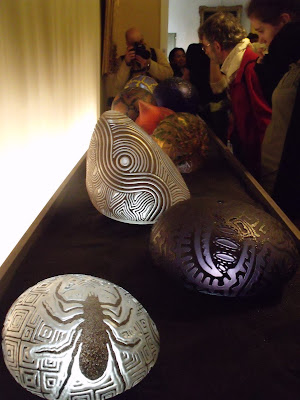 Here are some of the contemporary exhibits, mixed in amongst the antiquities. 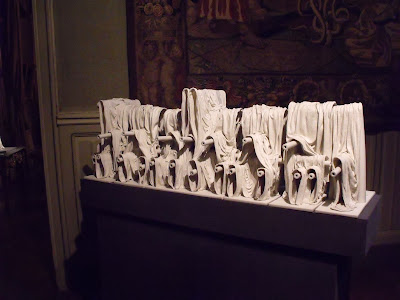 This was a large porcelain piece, made by soaking fabric in slip, the fabric burning away in the kiln. I remember firing student's work made by this method when I was an art college technician - it's so fragile, a technician's nightmare. 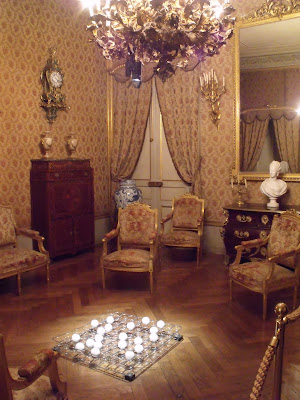 This work consisted of a number of glass baubles placed on the wire innards of a mattress. I found myself looking up to the chandelier above, to see where these 'bulbs' had dropped from. The springs related well to the surrounding furniture and made me consider what may lie beneath the upholstery of the chairs - not sure if that was what was intended, but that's how it was for me.

We then went to the opening night of the festival and the first films, a collection of remarkable animations, presumably painted on glass, by artist Florence Miailhe and a spectacular dance sequence, filmed on a seemingly huge shard pile - some of this stuff has to hurt.

I saw fascinating films and met wonderful people. The festival was attended by film makers, artists and delegates from all over the world. The French government clearly value their crafts, certainly more than my government does, (read this article)and the festival must have been a heavily subsidised event. We were put up in a good hotel and wined and dined in style by the organizers. I was also looked after really well by Alex, John and Steve, who were great company and we enjoyed a few beers every evening in the hotel bar. 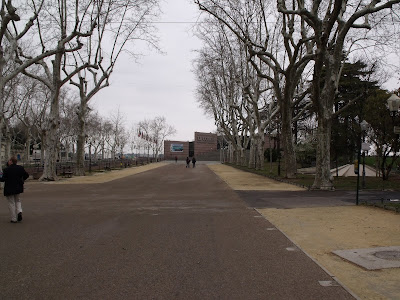 The venue for the film festival was a huge building called Le Corum, in the centre of Montpellier, situated at the end of this avenue of beautiful plane trees. 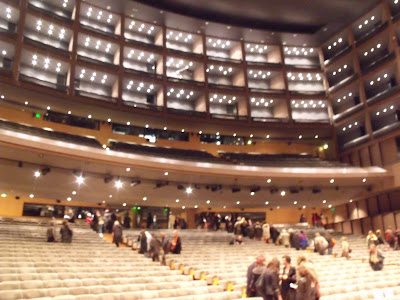 It's a vast building, an opera house in fact, with many seats, almost filled to capacity for the duration of the festival. 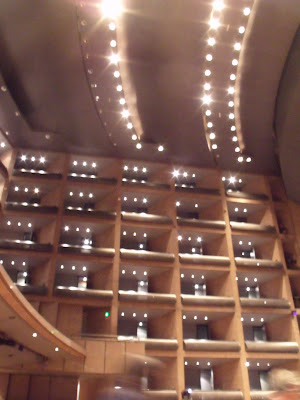 Looking up to the heights of this ceiling made me feel quite giddy - so I didn't do it too often! 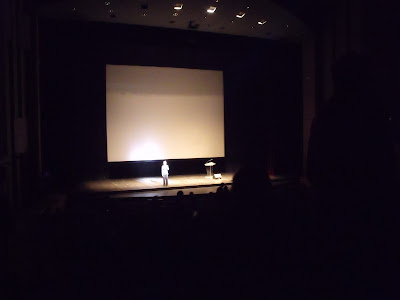 Here's the woman who introduced the films, in front of the huge screen.

These are some of the good people I met. Behind me and John is Florence Bruyas, a talented ceramic artist. Beside her, her sister Raphaelle, a film maker, who made this film about Florence. I'm afraid my French isn't very good, so I can't follow much of the dialogue, but the work and the imagery are beautiful. This was the film that was shown immediately before Hollyford Harvest.

Beside Raphaelle is a Canadian potter, Jody Greenman-Barber, who made a very entertaining short film, titled Clay Play, combining the rhythm of making on the wheel, with dance.

Next to Jody and her husband is Caroline Andrin, a professor from Belgium, who works with fabric and porcelain, cutting and re-sewing found items of clothing such as gloves, which are then used as moulds, within which slipcast forms are created. Between Caroilne and Alex, is potter Ann Van Hoey, also from Belgium whose film you can see here.

Hollyford Harvest was well received. I felt very nervous as the opening sequence appeared on the vast screen, followed the sight and sound of the Love Daddies. I hate hearing myself speak, so I was cringing somewhat. Subtitles in French had been added so the predominantly French audience could understand what I was saying. 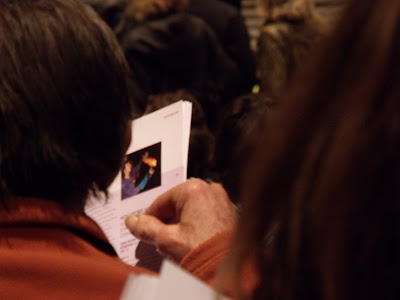 I was a lot hairier when it was filmed and had managed to stay relatively anonymous - the picture in the catalogue was also shot pre-haircut - here's somebody a few rows in front looking at the catalogue. After the screening, our names were announced and we each had to stand in turn, Alex, John, Steve, then me, then we had to wave to the huge audience, in response to their applause. It was one of the strangest experiences of my life - exciting, scary, kind of nice, but kind of odd too - I didn't know what to do, part of me wanted to sit down immediately, but instead I put my thumbs up to the crowd, then worried that it may be a rude gesture in France - they didn't seem offended fortunately, so I did it some more! I had to pose for photos and even sign an autograph - it was all very flattering. If anybody out there would like to purchase a copy of the film, you can get it from John Davies, right here. 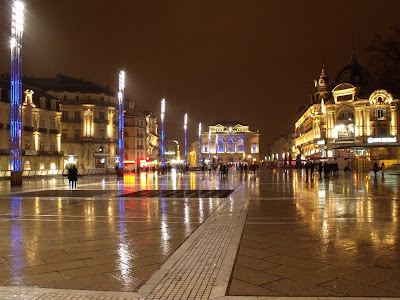 And so the festival drew to a close and we wandered back to the hotel in the rain. 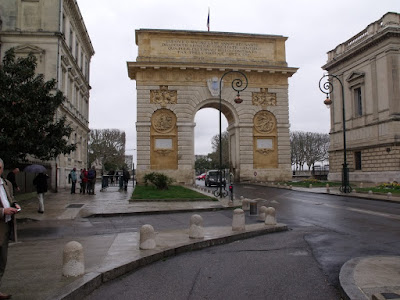 Yesterday morning we checked out of the hotel and set off into Montpellier to see the sights. 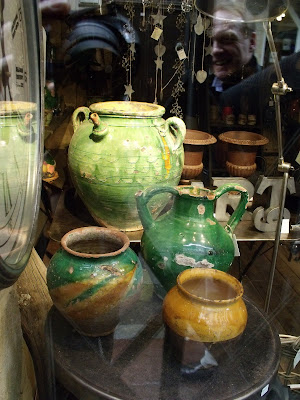 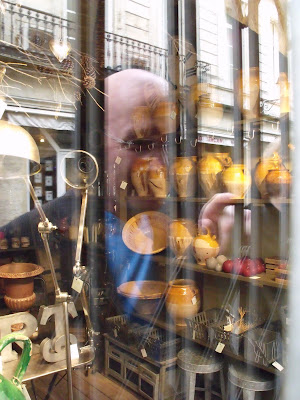 If only I were a wealthier man, I would have brought every piece home with me! 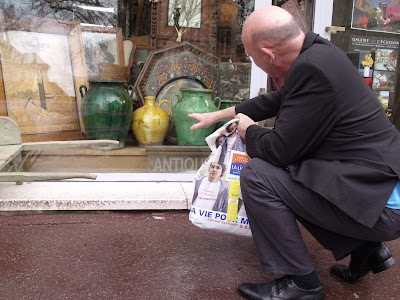 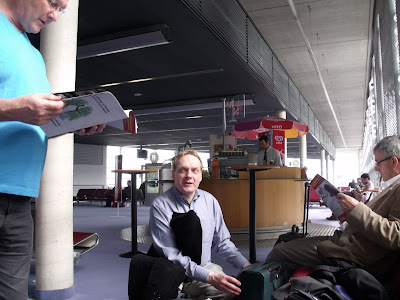 Then it was time to go home, so we headed to the airport and the cold and wet and grey of old Blighty. Thank you so much Alex, John and Steve for a wonderful experience.

So there we go, I did it, left my hiding place in my shed in the countryside, survived the aeroplane experience, saw a bit more of the world - and I loved every minute of it.
Look out the world, I hope I'll be coming to see some more of you again soon.

What a great experience, Doug, and congratulations. Thanks for writing about it. And I love seeing that shot of the square in the rain. Very French.

Great to see all the photos Doug and hear all about your trip.

Thanks Doug/// I noticed some photos of pots..no matter where you go, there they are. Take time to smell the... ere, look at the pots.

I'm afraid I watched that film of the dancing on the shards, but there's a bit in it that just reminds me of this:

What a lovely post Doug, it was a real treat to be able to sit here with the cat on my lap and enjoy your splendid adventure in France! Hearty Congratulations on the Film, and I am glad that your thumb gesture did not spark an incident international at the festival! (I was wondering if there were French subtitles for the Love Daddies songs?). I'm enjoying following the links and have the Florence Bruyas film running as I write this.
Best Wishes to you, P.

sweet post Doug!! It was nice to hear about the trip!

What a wonderful trip you had! Enjoyed this very much, Doug.

Doug..so happy for you that it all turned out fabulously! ;) what a great experience and now that you KNOW you can survive....the world awaits. :).. and Yes, aren't those ancient French pots wonderful!.
Rest well. Trish from Alberta

Thanks all, it was a wonderful experience indeed, I wish I could do it all again next week.