Hello the world
It's been a busy few days here and blogging has fallen behind, but here are some pictures of what's been going on. I'll start with yesterday and work backwards. 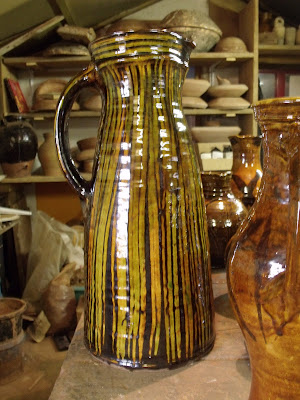 Hannah and I unpacked the kiln yesterday morning before Hannah headed back on the train to Scotland. 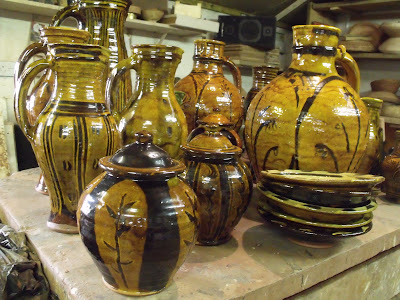 It wasn't the best of firings - there were quite a few losses due to damp in the kiln which hadn't been fired since last June and that did some strange things to some of the slips and glazes - but it certainly wasn't the worst and there were some pieces that came out really well. I was expecting damp to be a problem, so no surprises there. I'll post more pictures of the pots when I've got better images. Now I need to get stuck in and make another kiln load to mix up with this one so that I'll have pots with a wider diversity of tone and colour. The kiln will be lovely and dry for the next firing. I made a number of modifications to the inside of the chamber for this firing, the aim being, to achieve a more even temperature throughout(the top of the kiln tends to be much hotter than the bottom) and it worked, so I'm very pleased with that. 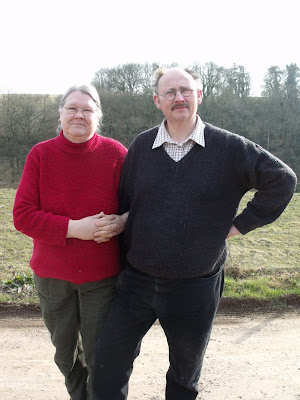 Earlier in the week I had a visit from Tony and Fliss Mugridge. Tony is the country's last itinerant brickmaker and runs a brickworks in Shropshire. They kindly delivered me some mugs and some clay samples. My clay is made from a blend of locally sourced clay and commercial clay. I've been using a brick clay from Exeter, but sadly the brickworks has now closed and the supply has come to an end, so I'm looking for a suitable replacement. I also use a clay that I dig from the woods opposite the workshop, but have always struggled to get enough to make its use viable as the complete clay body. I'm rather lucky however, that the owner of a neighbouring field has just given me consent to dig clay from his field. 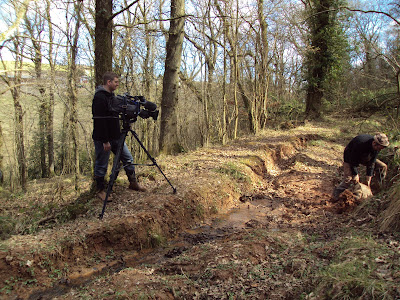 On Saturday, I was being filmed as the subject for another documentary, by two Sky News cameramen who are making a number of programmes about ceramics, with a view to offering the finished series to the Sky Arts channel. Here we are, filming the clay digging sequence in the woods. 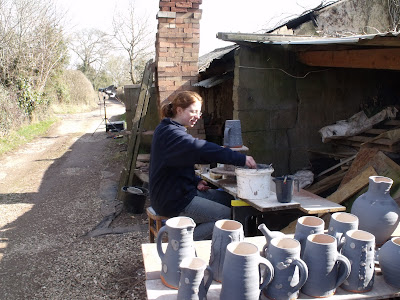 While I was busy filming, Hannah, bless her, was doing all my glazing for me. 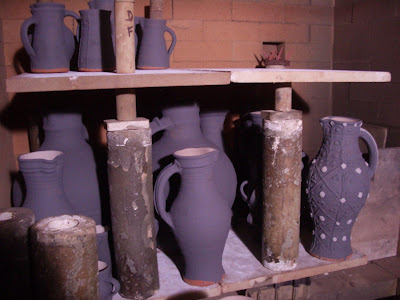 She's been a tremendous help and I couldn't have done without her this weekend. We packed the kiln, finishing the pack in the early hours. 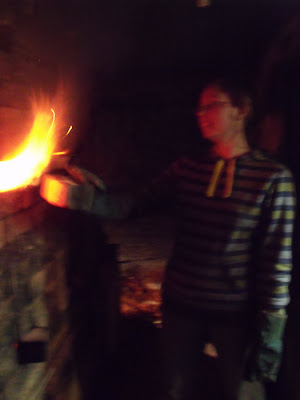 We got up early the next day to start the fire and she stoked all day while I was swanning around in the woods filming. We finally finished at 1.30 am, exhausted. 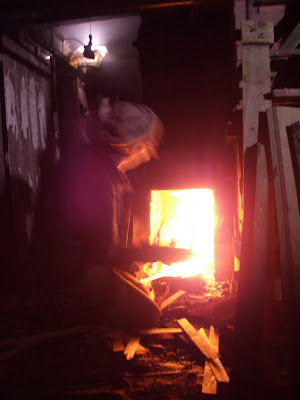 Just to prove that I did do some work myself. 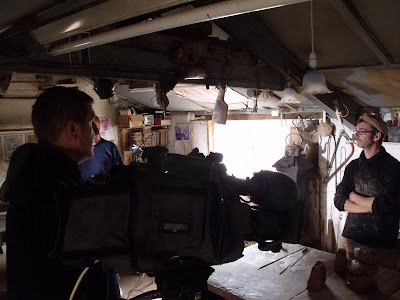 Here we are about to film a sequence about kneading clay 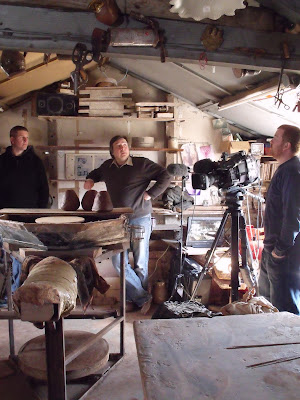 Nathan, on the left, Duncan on the right and in the centre, Blogger Paul . These guys are used to chasing all over the world after the likes of Gordon Brown and will soon be off to South Africa to cover the World Cup, so my rural workshop must have provided something of a contrast to the norm. Here they're planning the filming of the throwing sequence. Blogger Paul fed me the lines to which I reponded during the filming. It's pretty nerve racking having to speak to camera whilst throwing a pot, knowing that what you're saying and doing might be scruitinized in the future by a wider audience via tv, but these guys calmed me down and made it good fun. I'd also the benefit of having had this experience before, during the filming of Hollyford Harvest, the film made last year, about which I shall write more during this post. 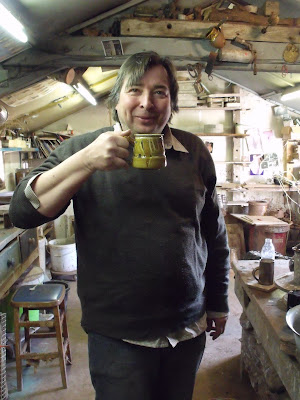 Here's Paul enjoying a cuppa from a mug sent to me by my Secret Santa, Jim Gottuso. 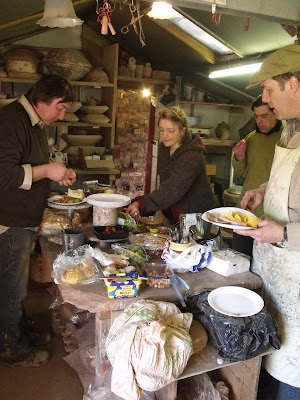 Marion, Paul's partner did a wonderful job of keeping us all fed and the wedging bench became banquet table to the hungry firing and filming team. 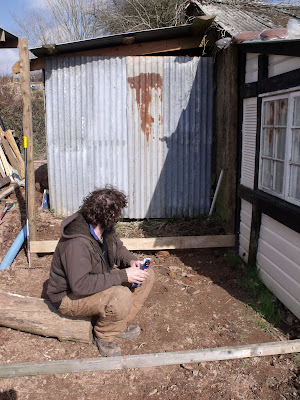 There was much going on outside too, as Different Dave came along with a concrete mixer and poured the slab for the next phase of my building project. This will provide me with an undercover area where I can chainsaw wood. I use a lot of salvage wood which contains nails, so it'll be good to have a sweepable area. The old tin shed behind will be taken down in the next few weeks and will be replaced with a new woodshed. 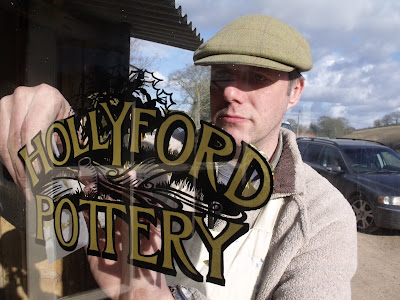 And this is my mate Frank, aka Andrew Grundon, the esteemed traditional signwriter, who designed and applied this lovely gold leaf sign to my 'showroom' door. Shortly I'm off to Hollyford to sort out this little room which has been used as a dumping ground recently. If I get time today, I'll paint up the dresser I built to display the finished pots, so that if anybody might like to come and see them next week, there will be somewhere to display them. 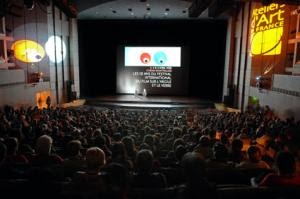 Tomorrow I head off to my brother's place just outside Plymouth for the night. I have to get up very early on Friday morning to take a taxi to Plymouth Airport, where I'll catch a flight to Gatwick. At Gatwick I'll meet up with Alex McErlain and the rest of the team who put together the film Hollyford Harvest. We'll then board a flight to Montpellier, France and to the Festival International Du Film sur L'Argile et Le Verre, where Hollyford Harvest will be shown on this vast screen to an audience of 2000 people. That's quite scary. I'll report back next week. In the meantime, have a lovely weekend et bonne chance, au revoir mes amis.
Posted by doug Fitch at 23:00

Glad you had a good firing, some of those pots are lovely colours! I see you have taken the obligatory 'wood firing potter' photo of Hannah.... Incidentally, on the subject of the photo's, that one that's supposed to prove you did some work is so blurred it could be Hannah as well.........
Have a nice time in France

howdy dougman...love the 1st piece...! and well done H stirling job m'dear! you deserve a massive cheer for all the hard work. I'm soooo tempted to go 'weer wee swopshire' hehehe all the best with the new clay source then and Chill in france have fun!

Wow all that happened and the kiln got fired!!! Good job Hannah!! Doug, the pots look fantastic. Good luck on the trip to France. Have fun.

Wow Doug you have been a busy bee. Some great looking pots from this firing. Have a great time in France - will the hat be going too??

While you're in France, us Westcountry Potters Association-ites will be watching Jack Doherty demonstrate at our AGM on Saturday in Plymouth. Should be good too!

Is that grey glaze on the outside of your pots galena? I can't believe you made Hannah use it. I just googled galena and found out it's used in chinese medicine, although only for topical application, so it must be OK as long as Hannah didn't eat any.

Last year I bought some gauly clay from a brickworks in Selborne Hants, £15 for a tonne, amazing stuff, i went on their website only to find that they had folded. A real tradgedy, 200 years of craft, all the family worked there.Soon it will be Ibstock or nuffin.
Good luck in France, sign looks great hope to see it soon.

eat it? No Linda I didn't eat it but I drank a couple of pints, like thick milkshake really, hasn't done me any harm - heeee weeeeee wooo arggghhhhh hahahaha

...and the Oscar for the best performance by a mudslinger in a dramatic performance?!..Sir Douglas Fitch! Best of luck, Doug, and I'd love to take you up on your invitation this summer to throw some red dirt!

Wow! tres busy indeed!.. pots, a film,food, friends and France!
What a Marvelous March you are having! :)..have FUN.
Adieu!

Hope it wasn't too daunting in front of 2,000 people - watching your fantastic film on your pottery

Hope you've sold yourself in the pottery sense

Still waiting for the DVD

Thanks all, as you'll see from my latest post, the trip to France was amazing :)

Dang Doug you are turning into a regular movie star!! and I cant believe that little studio was made into a cafeteria! CRAZY!!! so awesome!