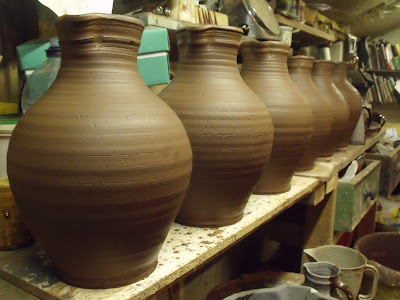 Here are a few pics of stuff that's been going on at the workshop over the past couple of days. The pictures are the wrong way round, as these are 8lb jugs that I made today, after warming myself up with 3lb jugs yesterday. 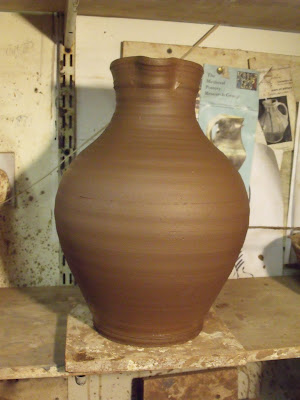 I like some better than others - I like the shape of this one - they'll all be ok with the right handle and decoration I hope. 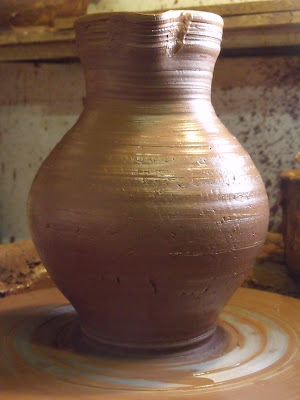 This is one of the 3lb jugs I made yesterday. I threw them using reclaimed clay from my scrap buckets, which was very soft and extremely 'short' as you might be able to see from the little splits in the surface. These don't go right through and will pick up the slip nicely, later. You can't hang around when using clay in that condition, so it's something of a challenge. I have a number of really old country pots that have similar characteristics, where the potter has clearly had to make the pots very quickly before the clay became tired and collapsed. 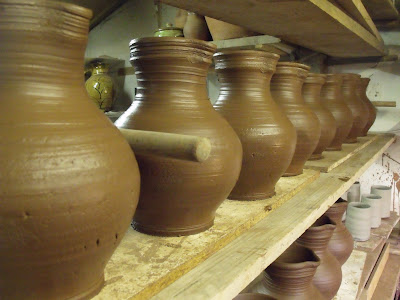 More of the same. In all I have eighteen 3lb jugs and six 8lb jugs. I want to make another six 8lbs jugs before I move on to the next thing, which might well be some more jugs - big 'uns.

Here's a little film shot today of an 8lb jug in the making. Note the new Spring haircut - I'm regretting that one, it's not the weather for it.
Happy Thursday all.
Posted by doug Fitch at 21:57

yeh baby!! that a bit early on the trim mr doug

going to try and make something big after watching this

It's interesting to see how many potters make that nodding movement while throwing.

Nice job on the jug! I really enjoyed your "throwing music" as well! Maybe we can trade throwing music one of these days....

At least you can wear a hat!
Isn't it a relief to get things going again.

There is a lot of honesty in how someone works, as in your movie. It is in stark contrast to the postures of others who don't make things present themselves. Was going to get my haircut tomorrow, now reconsidering, mine is really a mess ... get those shears out!

That was a great vidoe, thanks! It was me who wanted to see you make a jug on video. I love your jugs! When will you be in the US? I am leaving Korea 3/1.
-Andy

Hey Doug, I'm getting my hair cut today. can you let me know where you go, so I can avoid them. ha,ha,ha...

Sweet vid... it's nice to see that you do all your own stunts.
Cheers
~Craig

Evening all
Just wait until you see my Dame's wigs, proper Tina Turner jobs by all accounts :)

The soundtrack was some silly nonsense recorded at Love Daddy band practice the other day - all about beer as you may have gathered.

Andy, we're over in April, I'll get the dates up on my blog in the next day or two.

My potter's nod's got really bad!!