I'm coming to the States

Hi everybody. I've not blogged for a few days now, life's been rather hectic, with a tax return deadline and pantomime rehearsals and performances dominating my life. I haven't got a huge amount of pots made during the last week, hopefully this week will be more productive, although here I am at home, messing about on the computer when I should be at work, so not a great start. 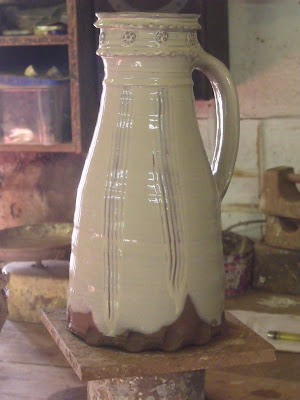 I made a few of these 7lb tapered jugs the other day, here's one after it was freshly slipped. 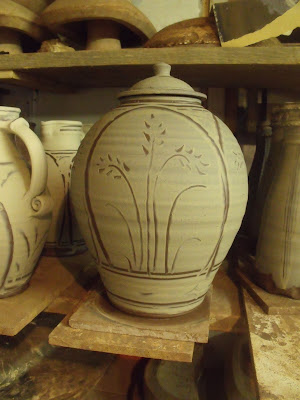 This is a large jar, drying and awaiting bisc firing. 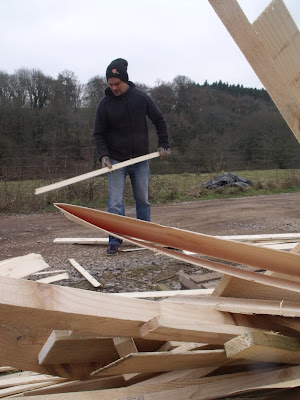 On Saturday I had a delivery of wood to the workshop. Marky Mark and I cut and stacked it in the woodshed in readiness for firings later in the year. I'm very fortunate, as I can get a regular supply of this softwood, which is delivered to me from a sawmill situated about five miles from the workshop. It's all the off-cuts and scrap that they can't use, but a lot of it's been very useful to me, not just for kiln fuel, also for building the various sheds that we've tacked on to the workshop in recent times. I've another load coming at the weekend, I plan to completely fill the new woodshed, floor to roof, so I'll have lovely dry wood for many firings to come. 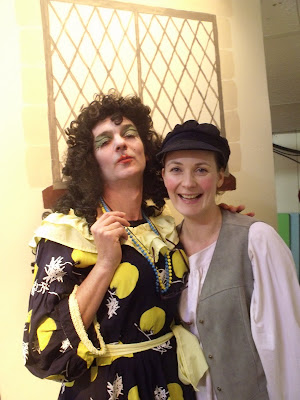 Well, what do you think of the new look? Will I be allowed into the States looking like this do you think?
I've been involved in a production of Tom the Piper's Son and as you can see, I have the part of the delightful Dame Aubergine Sprightly.
It's been great fun doing this pantomime, although it's a lot of commitment - we've been rehearsing for months, two or more evenings a week. The show opened on Friday night, which was a somewhat chaotic performance(the first night always is), followed by a much slicker rendition on Saturday. I have a rehearsal on Wednesday evening this week, then performances on Friday and Saturday. I'll miss it when it's finished, I'll need to find something else to do with my evenings for a while.
One of the reasons I got involved with the drama group, was that I felt I needed to boost my confidence of talking in front of people. My life at the workshop is predominantly solitary, so I'm more accustomed to talking to myself. It used to terrify me whenever I got asked to do talks and demos at ceramics events, although in recent years, I've done a lot more of it and it has become much easier. My belief is however, that if I can stand on a stage in front of a full house, packed out with folks from the village and beyond and act the role of this fierce yet charming old hag, perform Sonny and Cher's duet 'I've got you babe', with my friend Sarah, pictured here above, who is acting the male role and my reluctant love interest, then surely the prospect of doing some pottery workshops in front of people must be less scary when I come over to the States with Hannah in April. My word, that was a long sentence. To be honest I am a lot less nervous about the forthcoming workshops now, so it has helped. Mind you, I might pack my frock and a backing tape when I go, just in case it all goes horribly wrong!
Here are the dates and venues of our US slipware tour:
Cape Cod courtesy of Hollis Engley, the weekend of 9th and 10th April,
Liberty Town in Fredricksburg courtesy of Dan Finnegan, the 16th and 17th April
Shelby, North Carolina, courtesy of Ron Philbeck, the 23rd April
It all seems a bit unreal at the moment. It will be great to meet some of my virtual friends, in the real world and to make some new ones too.
Well that's all for now, housework to do, then back to work tomorrow
Bye bye all
Posted by doug Fitch at 10:54

We're all anticipating the workshop, Doug. Hey, are you bringing clay? Dan thought you might. I've chatted with Hannah about getting earthenware from a supplier here, too, but if you're bringing some I might get less. Though it seems bringing clay would be a pain. Let me know.

oh you must bring the dress and make-up- you would fit right in!
Can't wait to meet you in person.
M

Hi Hollis
I emailed you about it the other day, my mail can't to you, sorry. I was wondering whether there may be access to a pug mill at all? I thought I might ship out a bag of my coarse brick clay, then blend it with some smooth stuff out there, do you think that's possible?

Looking forward to meeting you too :)

You should plan a trip to Seagrove during the week so I could meet you guys! I have a show every weekend in April, so I will miss the workshops :(

It would be great to meet you Tracey, I hope we can :)

You'll definitely need an apron to cover that beautiful frock. REALLY looking forward to the workshop. I'll see you at Dan's!

actually a little of Dame Aubergine Sprightly would be a great workshop intro :))

If You make it through Customs with a bag of clay and a dress in your Bag. Then it makes you wonder what else gets through.

Will see you in Virginia and I'm very much looking forward to the workshop! Have always admired both your and Hannah's work and looking forward to seeing it in person. Will you be bringing any pots with you? If so, it may be time to dig out the old currency from our last trip to England.

Wish I were closer for the workshops.

Thank goodness for scrap wood. We get ours from a local truss maker who casts off bits of 2x4s in various lengths. So far we've gotten enough to heat our studio for the last 2 months.

Who'd have thought a Love Daddy could be such a Hot Mama? ;) You Femme Up quite well. Wish I could see the show!

I will, however, be attending the Shelby NC workshop and am very excited about it!

The only thing you and Hannah should be worried about is that there will probably be a lot of us who won't want you to go home!

Hi, Doug. I don't know why your email can't get through. it's hatchvillepottery@comcast.net, but you probably know that. If you can get through to Hannah, maybe you can send her any messages for me and she can forward them. She doesn't seem to have the same problem. Different service provider, probably. I think we could find a pugmill, but I don't know if you really want to make your own clay for a two-day workshop. Or for the whole week, I guess, for that matter. If you do want to do that, I'd say you ought to ship the clay as soon as you can. And then let me know what you want to blend it with, so we can have all of that on hand. Or, we'll get earthenware from our local supplier for both of you.

Hope you have a great time in the states!

Looking good with your new look ; )

Thanks all, it's getting quite real all of a sudden, we're going to book our flights today I think :-)