Here are a few pictures I took today at the workshop.

I've been putting the hours in lately, so my blog posts are a bit short on words as it's often late when I get home.

There are some important deadlines looming up close and I'm feeling the pressure a bit at the moment. I'm up to the task though, potting's feeling good and in spite of the sense of panic lurking below the surface, I haven't felt this inspired and energised for a long time. 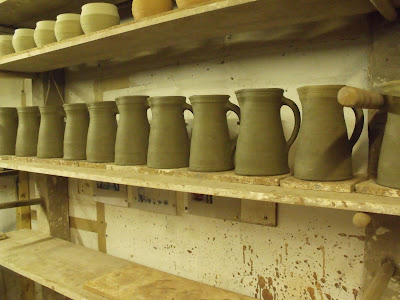 I slipped these little jugs this evening. I initially set out to make six, but ended up making twelve, which somehow took the pressure off a bit when it came to decorating them, as there were six 'spare' ones. 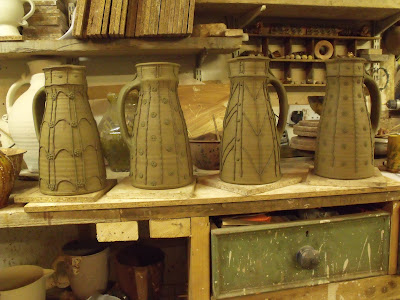 These tall jugs took ages to decorate with lots of little applied pieeces of clay and sprigs. 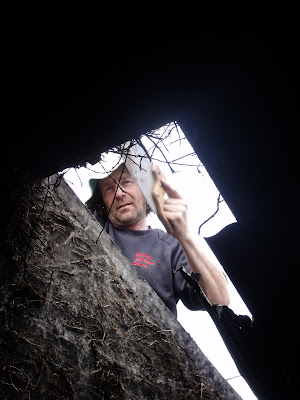 This morning when I got to the workshop, Different Dave was already there, cracking on with the new wood shed. This is the hole in the kiln shed roof, which has to be repaired in the next few days before the weather changes. DD's foot is thankfully on the mend, after standing on a nail last week. He's bought a new pair of safety boots with metal plates built into them to prevent such an incident reoccurring. Here he is showing them off from the top of a ladder. 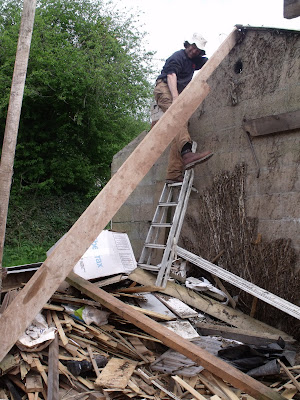 Ah such attention to health and safety Different Dave :-)
Posted by doug Fitch at 23:48

just gorgeous looking jugs mr fitch..ah underlying sense of panic nothing like it close to a deadline! ahh the week ahead thanks for reminding me to write a glaze and firing schedule..

Very nice shapes! Can't wait to get back on the wheel!

Good to see Different Dave is back on the job!! Yes the name of the game is making, making , making.

Love the jugs. Sometimes it is hard to not make too many of them because they are a favorite. I am envious man. I also do need to come make some more stream pots. Keep up the "proper job!"

Very interesting blog, I am glad to have found it through Hollis Engley's blog.
Dave

Hi all, howdy Dave, thanks for calling by, good to 'meet' you