Well I discovered today that my 2 mexa pixel brick of a camera does still work in spite having landed heavily on the floor a couple of days ago - some of the functions are knackered, but the auto and close up settings still do what they're supposed to do and as they're the only ones I use, all is good, hurrah!

I like this little camera because it's so basic, just point and press, so I was sad to think I'd need to replace it. Cameras don't last long in my workshop as they get full of dust - I've already killed two more sophisticated ones, but they are an essential tool of the blogger and pictures so often can say more than words, which is good because so often there isn't the time in the day to write too many words. Anyway, before I do write too many words and send you into a deep sleep with my sentimental camera ramblings, let's get on with the picture show. 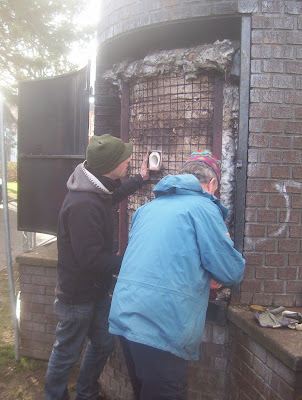 Here are Matt and Philip opening the kiln on Sunday morning. And inside, the treasure is revealed. The back of the hatted head on the right belongs to my friend Roop who pots in a nearby village. The hat on the left is of course Philip Leach who once again organised the firing perfectly 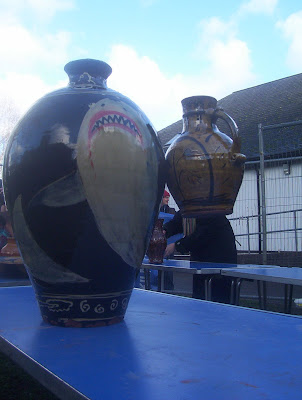 The middle stack had moved during the firing and my harvest jug got himself a new big brother - a huge shark-faced jar made by Nick Chapman.

It was a brilliant week, great spending some time chewing the fat with Blogger Matt, who now has some beautiful pots from the firing that you can see here 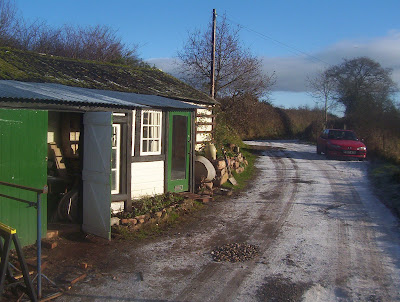 Today I've been in a very chilly workshop doing some glazing. This would have been a much quicker and easier task had I not have left the glaze bucket in the car after bringing it back from Bideford. I took the lid off to find it had frozen, so then had to defrost it in the kiln. Winter's here for sure, although we don't have snow here like much of the country. 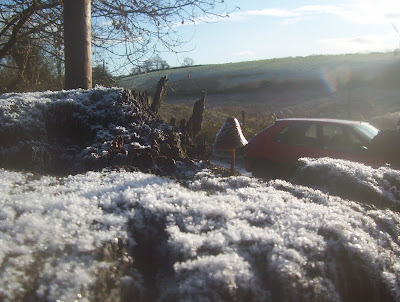 Well lucky me, I have to go to town again and become a crazed Christmas shopper - oh joy.

Back soon, in the meantime, here's a picture of a toadstool and some frost, on a log.
Posted by doug Fitch at 12:02

Some fantastic pictures, looks like a great white has eaten your harvest jug. Is the great white huge or is your jug wee ?We have massive snow disruption up here. My winter pottery course for disabled kids cancelled after one day. Happy christmas and here's to a good year for you and yer family.
Sue and Tim.

Hey Tim. That pot was massive, I felt sorry for Nick because it had run and stuck down too - he was really relaxed about it though. Sorry to hear about the course. Great Chritmas and 2010 to you too and thank you once again for all your support

Wow that jug suspended in mid air looks crazy! Thanks for the pics. Hope your shopping goes well and that you all have a Merry Christmas.

Did you not manage to melt your bucket in the kiln as well as the glaze? Now that would have been funny.
Poor little jug stuck to big jug the shark is trying to eat it obviously.

Oops that was me!

Happy Christmas Doug, from sunny New Zealand! (well the last 2 days have been!). Love the bottle kiln, I keep thinking how nice it would be to enlarge the one I have here. I think of mine as being a vertical anagama, and it does do good flame flashing. Some lead glazes blister, but...no sharks in it, thank goodness!

Looks bloody cold Doug. Not so bad here, no frost, no ice but you only have to go inland a mile or so to find it.
I love the Siamese pots. I hope the operation to separate them goes well.

Love the Shark Vase/Harvest Jug combo, you need to find someone with a large staircase to display them properly.....