Here are a few pictures of the things that happened and the folk I met in 2009. 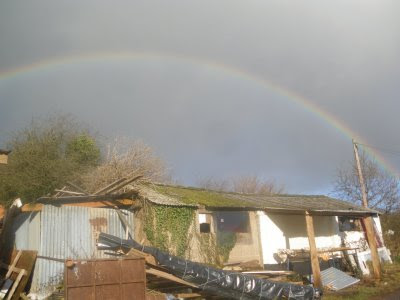 Building took priority this year. In January, the workshop looked like this..... 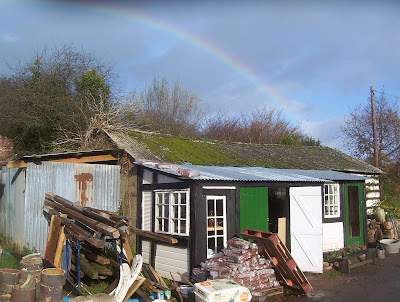 And now, a year on it looks like this. Note how the end of the rainbow has grown just a little nearer in a year. 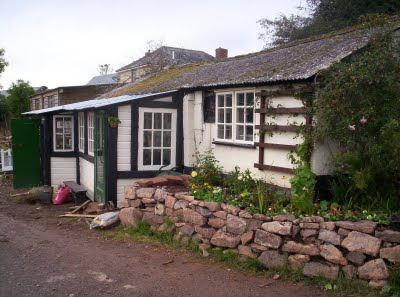 There's still a lot to do, but it's a much improved space. I set out to use as many recycled and scavenged materials as possible - windows from the local tip etc.. John the Drums and Matt who owns the place are both builders and brought me several van loads of scrap timber from the building jobs they'd been working on, cheers chaps for making this possible. 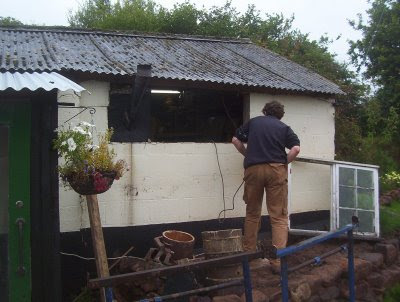 I had some fantastic, outstanding help with the construction from Different Dave who mixed and poured concrete in the hottest of weather(we did get a bit this year) 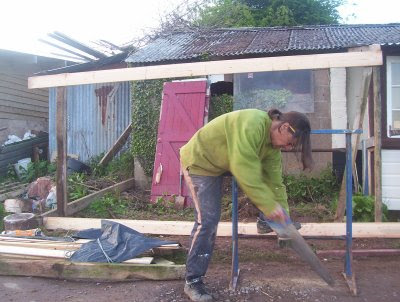 and Marky Mark who was his ever supportive self, big time thanks to them. 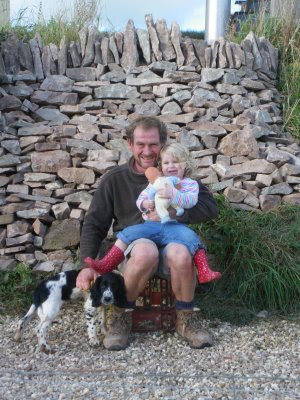 A big, massive juicy thank you to my good friends Matt and Alex who own the workshop and let me do all this along their lane. Without their support I can't imagine that I'd have a business at all. Here's Matt with their little girl Tilly and of course, Digger the dog with whom I've shared many an inspirational lunchtime walk. 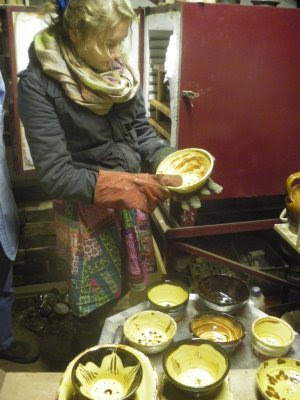 My 'trainee' Jess went from strength to strength with her pot making in the early months of the year which was extremely satisfying for me to see. She's about to set up her own small workshop at home and I hope that the things that she's learned at Hollyford will continue to develop.


2009 was a good year for meeting in person, many of the virtual friends I share my time with through this blog. What a marvel the internet is and what a tremendous support all my blogging chums out there have been over the year, thank you all. I spend my days alone and my evenings in your company(does that make me sound a bit of a saddo?!)

Here are a few pictures of some of the bloggers I was lucky to hang out with during the summer. 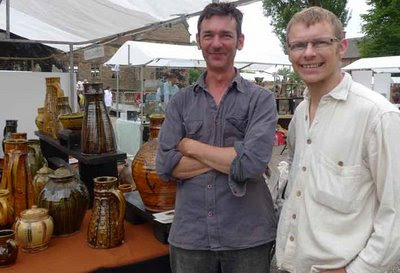 This is the amazing woodturner Blogger Robin Wood, who I met at Rufford this year. Robin is also the founder of the Heritage Crafts Association(please sign up if you haven't already!). 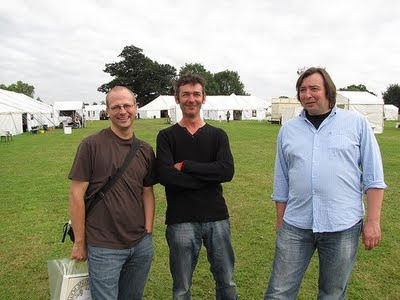 It was a delight too meet Blogger Ron Philbeck(left) and his wife Sarah who came over from North Carolina to visit. They came to Art in Clay at Hatfield House, where we also linked up with Blogger Paul Jessop, here on the right.
Ron and Sarah came and stayed with us for a few days, during which time we visited the Mecca of the British Studio Pottery movement, The Leach Pottery, St. Ives. 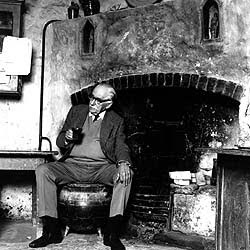 It was a propper blogger's day out. To explain the next few pictures, here's a shot of dear old Bernard himself back in the 1920's 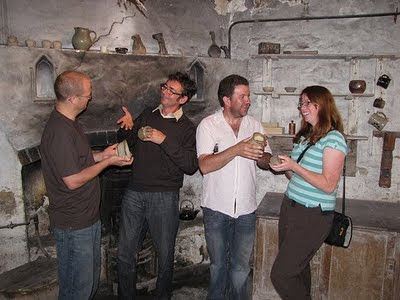 In the picture, in front of Mr Leach's fireplace in philosophical debate are left to right, Ron, me, Blogger Andrew Douglas and Blogger Hannah McAndrew. 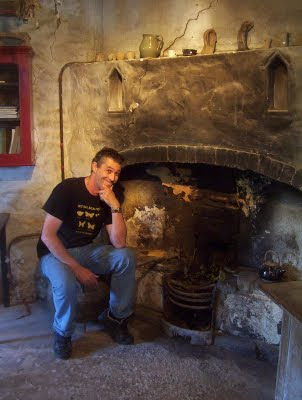 I went again a week later with a certain lady from Adelaide and met Blogger Richard James, who is the technician at the Leach Pottery and also makes some very lovely wooden furniture. 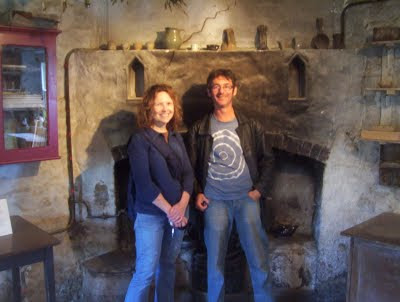 And here's the girl herself, Blogger Angela Walford , who came over from Australia and stayed with us. We had a great time making pots together at the workshop. 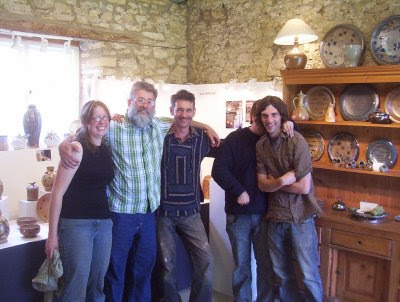 The final blogger shot is of Blogger Dan Finnegan from Virginia, USA. A great man, with a great beard. Also in the shot, Andrew, Hannah and my good chum Blogger Matt Grimmitt. 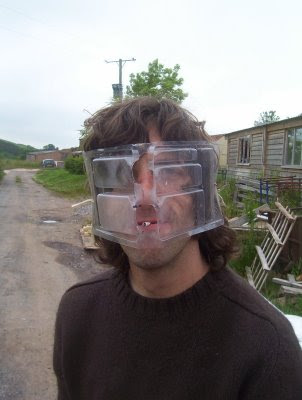 I spent quite a few magic moments with Matt this year - remember the Smoker Stoker? 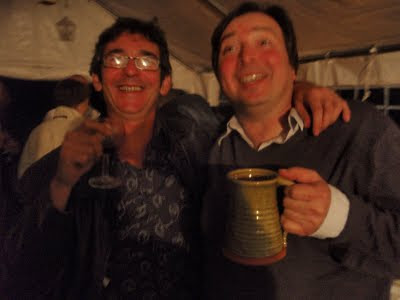 And with Blogger Paul - here we are at a show at his place during the summer. 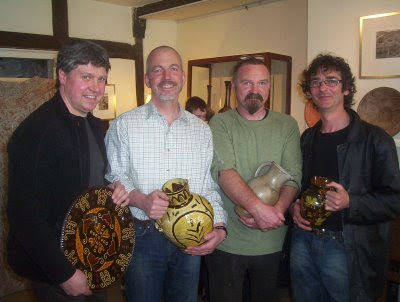 This picture was taken at the Derby Boys show at the Long Room Gallery in Winchcombe, with my college contemporaries from back in the golden '80's, Nic Collins and Simon Hancox and our tutor from those days, Tim Willey to whom I am greatly endebted. 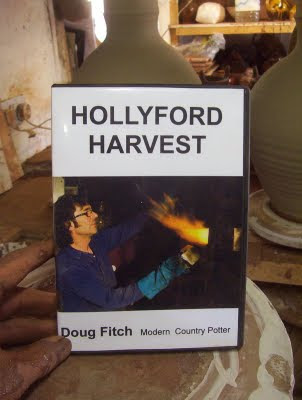 Alex McErlain's film Hollyford Harvest was finally finished, submitted and selected for the 7th International Film Festival in Ceramics and Glass in Montpellier, France. The film has since taken my little shed in Devon, all around the world via Facebook and is to be released for sale early in the new year. It's been a real highlight of the year spending time with Alex - we share the same passion for the English tradition of earthenware pottery. 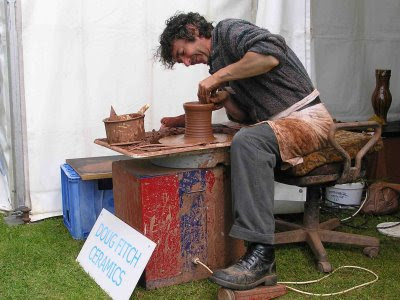 It's been a year of many demos at the various shows, this one at The Contemporary Craft Fair.

I think I did six this year, thankfully growing in confidence with each. The first one I did early in the year caused me so much stress I had a terrible migraine all the day before - it's pretty scary making pots and talking in front of a room full of people and certainly a contrast to the solitude I'm accustomed to in my workshop. Now I really enjoy it - I think. 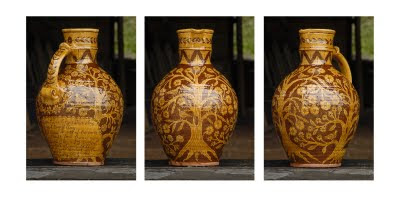 My pots have developed a lot too. Sgrafitto jugs have been a particular favourite that I've added to my repertoire.... of combing, drawing, sprigging etc. It's funny looking back through all these pictures, because all these pots have gone to new homes. A big, big thank you to all the folk who now own them.

Well that's about all for this year I think. The Half Moon Inn beckons, although I'm feeling pretty tired and might just have a quiet night in with a seemingly endless stream of Michael Jackson videos on the telly.

Ah, change of plan, friends have just arrived to drag me, albeit reluctantly, to the pub, so this rambling blogpost is unfinished. Thank you to all of you who I haven't mentioned.

My very best wishes to everybody out there, here's wishing you a happy and prosperous 2010, catch you next year.

Happy New Year to Doug and the crew.

From James and Samantha.

That photo at winchcombe is a classic - if I had to list my pottery heroes you and nic would be pretty much at the top. Brilliant post. Happy new year to you and the family.

Yes! What a year ! Thanks for the memories. Some year we'll meet! Have a great one.

Doug as ever another great post. I always enjoy reading your blog. and you have made some stunning pots over the last year.
Best wishes and good luck for 2010. it's gonna be a goodun I can feel it in my water, or is that just last nights Beer!!!

that was a great post doug.
made me cry with laughter...that pic of matt with the smoker stoker mask! so funny! x x x
here's to a very properous 2010.