I had a phonecall yesterday from Alex to tell me that the film that he and Steve made at my place, Hollyford Harvest, has been selected for the 7th International Film Festival on Ceramics and Glass. 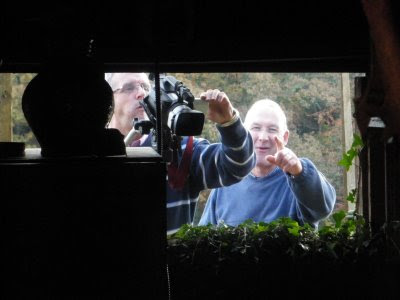 It's a major achievement to have been selected, many congratulations to them and also to John, the editor, who I have yet to meet, he must be sick to death of the sight and sound of me.

The really exciting news for me, is that they're taking me out to Montpellier with them. I bet the south of France is lovely in March - and a whole weekend of films about ceramics - well what a treat!

Apparently the film is going to be shown on a huge screen in a 2000 seater cinema. Alex tells me that there are very few empty seats at these screenings. So it'll be odd to see my workshop so big, Marky Mark and Blogger Matt huge, and the Love Daddies larger than life. It's going to be very, very strange.


Here's what the letter of acceptance said:

We are pleased to inform you that your film « Hollyford Harvest » has been selected for the official competition of the 7th International Film Festival on Clay and Glass and we would like to congratulate you for it.

Your film has also been selected for the Youth Festival, which is held every year, in several French cities. We will shortly get back to you on this subject.

After receiving more than 160 films from 33 countries, the viewing committee, responsible for the selection, and consisting of representatives from the crafts, press and cinema fields, has shown high regards for your film.

« Hollyford Harvest » will be presented on the 20th or the 21st of March 2010 at the Corum in Montpellier among 22 competing films.

The jury will give away 5 awards, and the festival-goers will decide the winner of the Public Award by vote.

We would be pleased to receive you in Montpellier and take care of your accommodation. We will contact you to discuss further the terms of your stay....


If you have any further queries please do not hesitate to contact us, we shall remain at your entire disposal at all times.


We are looking forward to hearing from you.

That's AWESOME!! It really is a good film. About a really wonderful potter. (That's you!). I hope they also sent it in to the Festival we have. Maybe you'll come to Shelby!!!

Well done, lads! How does one see this marvel? I'm not sure I'll be in France in March...

That's just great, Doug. And a trip to France in the bargain. What a great thing. We want to buy DVDs, you know.

I understand that Spielberg is in the running to direct the sequel!

thats fantastic news, well done all of you!

Well done Doug, any news from the Koen brothers yet ?

congratulations doug, it will be wild to see it on the big screen and in france no less.

That is Such Good News! Hurrah, well done! Have a great time in France.
Hope it gets screened in New Zealand.

Thanks! It's exciting, I'm not much of a traveller so it'll be quite an adventure. I've asked Alex what happens if folk want copies, I'll report back.Cheers all

Congratulations for your selection!!

I have been in this festival sometimes and it is really very interesting .

Congratulations to you all... Have you gone already...?

Wow! Congratulations! I've been away from the blogs for a while and you go from a potter to a movie star while I'm gone! Bravo!

Welcome to the Buy French Pottery Store!
Shop our exclusive collection of handcrafted items. Our popular garlic grater plate comes in 4 unique designs. Our catalog features handmade items from France as well as other regions of the world.
french pottery

There are a lot of resources out there on http://www.julianopottery.com/. It would take ages to study it all. What we've done is brought it all together, so that it's all available here, in this one place.