It's Wednesday since I last blogged - everything has been so hectic for the past few days.

The show in Exeter is going well. I made some good sales on Friday night at the opening and chatted to interesting folk all evening, but didn't get any decent photographs. Here are a couple that I snapped in the workshop last week when I was working out which pots to take. I'll get some better pictures when I go in to the show to invigilate later in the week. 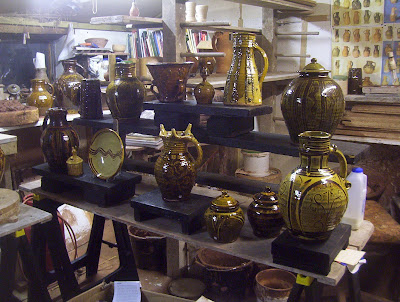 I took my wheel in to the venue and did a talk and demo on Saturday, in which I threw a large jug in two parts and with a good old blast from my gas burner, was able to handle it, slip it and decorate it, to a state of completion within an hour.

The show's on until Saturday night. 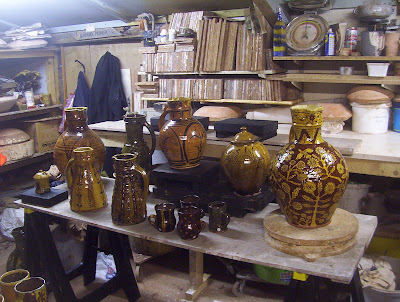 This week I'm going to try and get on with sorting out the workshop which is utter chaos both inside and out at present as none of the building work has been completed. There are piles of stuff everywhere. Maybe I'll build some kind of display unit to hold finished work so that there's somewhere to put it when I bring it back from the show. Also I want to get some pots made this week to fire in the Bideford kiln later in the month. More about that soon.

Oh well, I'd better get to it before Facebook Scrabble distracts me. Hmm, a day off playing Scrabble in the warm, what a nice idea.

Have a good start to the week everybody.
Posted by doug Fitch at 08:22

I really like that dish with the combing down the center.

beautiful jugs doug... i didn't realize you were a scrabble aficionado, i would suggest a overseas match with you if you're up for it although i'm not sure what i'm getting myself into considering your casual use of the word invigilate on your post.

Spoke to one of your scrabble opponents at Harley Gallery Christmas Craft Market at the weekend.....

Gorgeous jugs with that earthy-aged look.