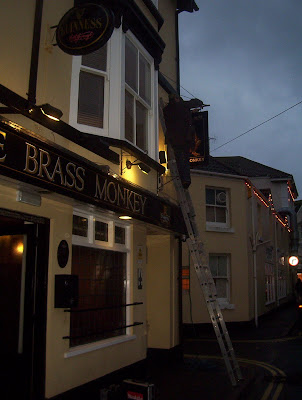 I've been playing signfitter this afternoon, helping my mate Frank put up the signs on a pub at Teignmouth, by the seaside. Unfortunately I was supposed to br navigating and as I have no sense of direction, it took rather longer to get there than it should. By the time we arrived at the pub the sky was growing darker by the minute. It was crazy weather and the sea was crashing against the sea wall - not great weather to be up a ladder, holding up big signs.

The wind and rain has got worse this evening and we had to drag a tree off the road that had blown over on the way back. Frank insisted on driving home to Cornwall, I wish I'd been able to persuade him to stay. Next door's fence has just ended up in our back garden, it's really wild out there. 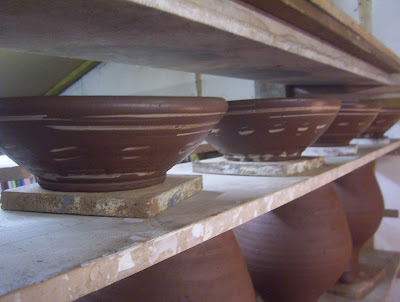 This is some of the stuff going on at the moment. A lot of it is for a group show I'm part of in Exeter, I'll post details later. 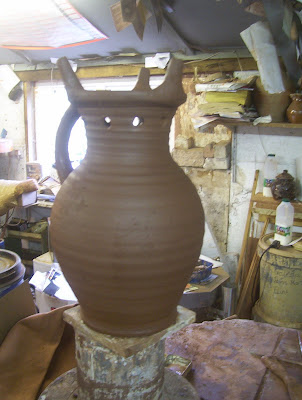 I'm going to sgrafitto this puzzle jug. I'm also working on another large sgrafitto harvest jug, it's taking ages, but will be pretty when it's finished. 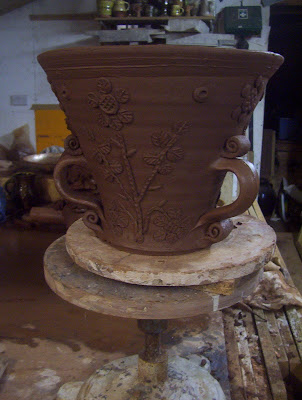 This is a Tyg.

A Tyg is a large English mug with three or more handles dividing the rim into sections for several drinkers. These tall, black-glazed, red-bodied drinking vessels were produced from the 15th century through the first half of the 17th century, peaking in popularity during the 16th and 17th centuries. Some were made with as many as nine handles.

The multiple handles also allow hot drinks to be passed around without pain.

Tygs were made in large quantities at Wrotham in Kent and in many Staffordshire factories. Examples have surfaced at 17th century American colonial sites, as well as in the UK. (Wikipedia) 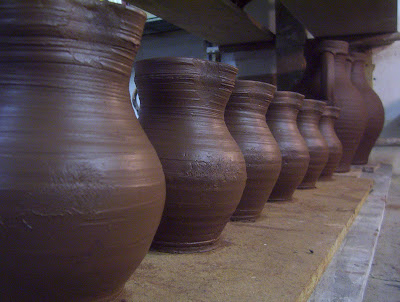 And some little jugs. I made these two days ago and they're still too soft to put handles on. Maybe tomorrow.

Happy weekend all
Posted by doug Fitch at 19:55

Ha, I made a tyg this week for the McGill Duncan thing, a blacksmith is going to decorate it. That ones bloody lovely.

Y'know, this blog is brilliant - I can read it everyday and it's just like having a brilliant potter next door, keep it up Doug! If i were rich I'd get a beer drinking mug from ye, but more than one handle might lead to arguments, do you think people were more co-operative and sharing in t'olden days? They seemed to like fighting a lot.

Ay.... frank installs as well that's some service!!
what's going on on the outside of those bowls?? under? over?
you been a busy fella again, hope everything dries well...

Evenin' all. Cheers Richard, good to hear from you. I do think folk were more co-operative back in the day, before the media were here to make everybody greedy by telling us that we need all those things that we don't really need(like a tyg in the 21st century!)

Ang, it's a black slip over a white. Yes, Frank's the man when it comes to service bless 'im.