Down in Cornwall with Angela

Our trip to Cornwall nearly didn't happen. My poor little car was more broken than I had at first thought and rather than it just needing a shock absorber replacement, it appears that the whole back suspension has collapsed. The man at the garage told me to throw it away. Booooooooooooooo - What is it with me and cars? 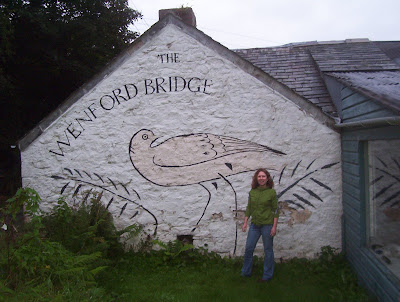 Anyway, I hired a little car and Ang and I travelled down on Thursday evening and stayed at my acclaimed signwriter friend Andrew's(aka Frank) house. He lives in an old china clay worker's cottage, on the top of a hill that overlooks Michael Cardew's now defunct Wenford Bridge pottery. 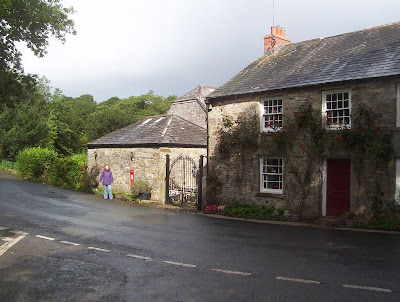 There's little left of the pottery now, the whole place is a bit of a sorry state, derelict and decaying, although the house still looks much the same as it ever did. I have mixed feelings about it - should it have been preserved in the same way as the Leach Pottery has been in St Ives? I think probably not, it has come to its natural end. We still have Winchcombe Pottery, Cardew's first workshop, as testament to his contribution to the British Studio Pottery movement - I think he made his best pots there too, slipware, but then I'm biased. 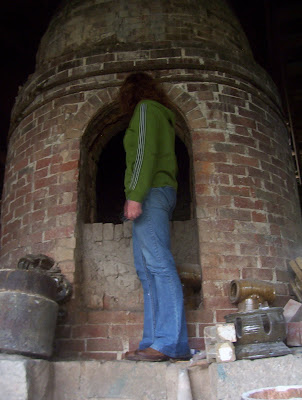 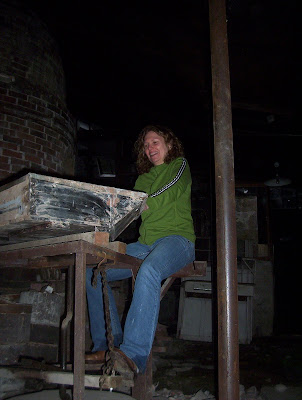 Some time ago I was fortunate enough to have been able to purchase the remaining equipment, including Cardew's hump moulds and his kick wheel. The moulds came home to my workshop some time ago, but the wheel, which is a huge and heavy construction, made out of welded girders is currently stored in Frank's garage until my workshop is reorganised in order to fit it in - I can't wait. It's a great thrill for me to own the wheel as MC is one of my biggest influences. I'm pleased to be keeping this stuff within the tradition and one day, when I've had my time, I hope it'll go to someone else for them to do the same. 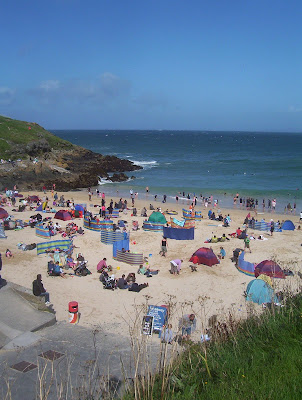 The next morning(Friday) we headed further down into Cornwall, to St Ives. I think Ang thought these folk were absolutely crazy - she wasn't too impressed with the English climate. Come to think of it, I thought they were crazy too. 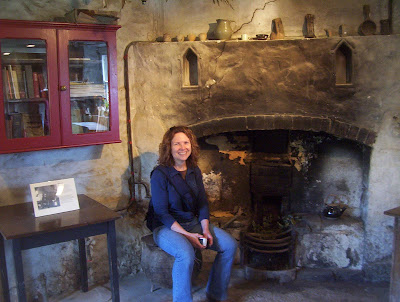 We went to the Leach Pottery. I was only there a couple of weeks ago with Ron and my other blogging chums. Of course we had to take the all important fireplace shot. 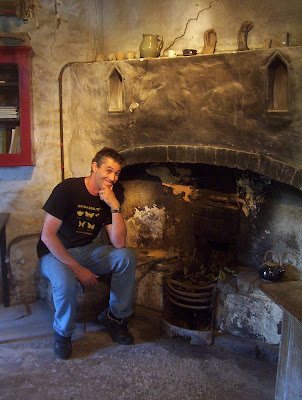 We also met Richard James there, he's the pottery's technician and an occasional visitor to this blog. It was good to meet up with him - and take the obligatory fireplace shot of course. 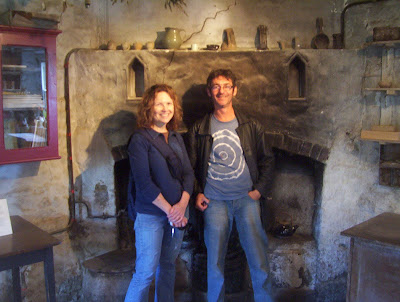 Oh - and another one! 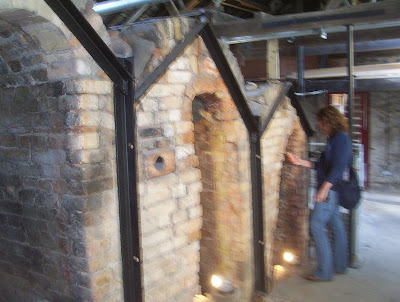 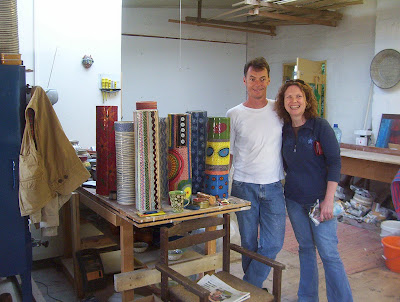 From St Ives, we travelled to Penzance and to the workshop of Lincoln Kirby-Bell, an Australian potter, now resident here and a friend of Ang's from back home. He makes amazing, funky slipware, with colourful, trailed lines and dots. Ang bought Hil a mug, which she likes very much.

We headed home and got back in time to unpack the kilns which contained the last of the pots that Ang made while she was here. I'll get pictures up of those in a separate post.

Ang had a little gadget(she is gadget girl)on which she shot lots of video, subsequently edited and posted on her blog. There's some really good footage, stuff in the workshop, film of the village where I live and the surrounding countryside, kiln firing at Nic's and much more. Ang is posting new ones all the time, check them out right....here.

It's Bank Holiday here tomorrow and the last day for Hil before she goes back to school for the Autumn term. The boys go back later in the week, so I'll pack and fire a bisc kiln, but will spend the day doing something family related. Oh yes, I don't think I reported back, Luke did really well in his GCSE's and of course got his A in art - it's proud dad time once again.

Happy Monday all.
Posted by doug Fitch at 23:46

Wow! What a great time you guys have had! Good for you.

Really great set of photos and posts around Angela's visit. It is interesting to see the ones of Wenford Bridge pottery, and to hear of your mixed feelings about the issues of preservation of such places. I once went to a gathering that took place after a friend of mine died. He was there on view in his open coffin, and we were invited to sit with him. It was a strange thing, as he was so different in death to how he had been in life. He was in fact no longer there, and his made up doll-like body made him seem, if anything, more distant. I do wonder if some of the preservation attempts on significant buildings, and other places of interest, can have a similar effect. If Wenford Bridge was preserved, there is a risk of creating a sort of Cardew according to Disney!

I do like the thought of you using MC's wheel and hump moulds. That seems to me the best way to keep his memory and tradition going. Michael Cardew celebrated in wet clay, sweat, and a hot kiln!

Looks and sounds great.
your family have been the perfect hosts.

Yours has quickly become my favorite blog. I don't get out of the shop much, except to art fairs. Your blog often reads (to me) like a brief travelogue and I love it. Thanks, and keep it up!

Cheers all
Peter, I think that's a beautifully conveyed analogy. I want to keep this stuff alive. Jess made three dishes today from his moulds, she's only seventeen, she's the future.

John, good to meet you.

wow ! what a blog

wow ! what a blog

nice blog and great information about down in corwall.
- St Austell

I absolutely love your blog and find almost all of your post's to be what precisely I'm looking for.
Does one offer guest writers to write content for you personally?
I wouldn't mind composing a post or elaborating on a lot of the subjects you write regarding here. Again, awesome web log!