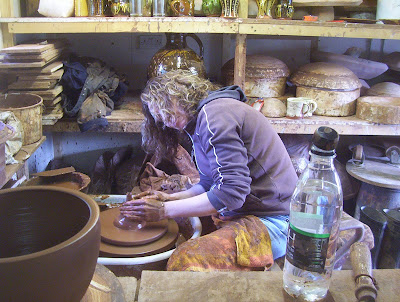 Ang and I have been in the workshop making pots these last two days. My wheel hasn't been as clean as this since it was new.

Angela made three teapots. I'm looking forward to seeing them with slip on tomorrow. Ang hasn't made slipware before, so it'll be the first time she'll see her pots at that magic moment when they're covered in glistening, wet slip. 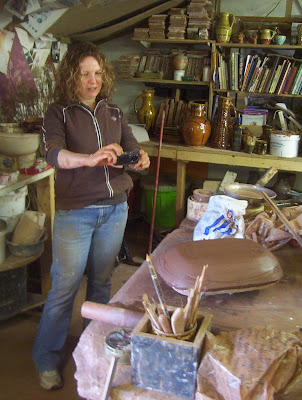 She pressed out a dish on one of the Michael Cardew moulds that I acquired a few months ago. Take a closer look at the fruits of Ang's labours....here. 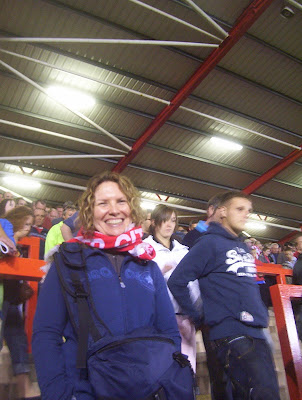 Last night we took her to watch Exeter City play football, where she learned a few new songs to sing in the shower. Poor girl, she's feeling the cold in this typical English summer.

We're off to Nic's place tomorrow afternoon where I'm going to be giving a throwing demo to the delegates at one of Nic's kiln courses. Blogger Andrew will be there, looking forward to seeing him again.

To the pub now for a game of skittles. Goodnight.
Posted by doug Fitch at 22:29

Hello to Ang, good to see you in action. I would love to have been able to 'nip' down to Devon to say hello, it shouldn't seem like a big deal when you have come all the way from Aus. Sorry to hear you get migaines Doug, that was pretty good migraine portrait, hope not to see another of those too soon.

her teapots are perfect...

Oh Angela made three teapots is it cool thanks for sharing..
Carol
Plug and play Security Systems no Contracts at the best affordable Prices