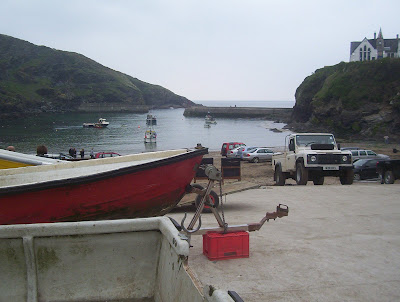 I had a lovely time visiting my mate Frank(who is really called Andrew Grundon - it's a long story) and his family. We took a trip to Port Issac yesterday as Frank had to meet up with a guy from the production company that make the tv series Doc Martin. I've never seen it, I'm not a big tv watcher, but I'm told it's a good show. It's filmed in Port Issac. Frank is doing the signwriting for some of the buildings that are being used in the series. 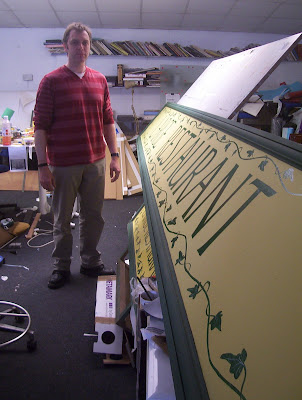 Here he is in his workshop with one of them, a huge sign for an establishment called Large Restaurant. He's a very talented man my mate Frank/Andrew. I've put this slideshow on before, but I'm putting it on again for the benefit of anyone who might not have seen it last time.

Back home last night, then to the car boot sale in Exeter today. I managed to find some louvre doors for the next bit of workshop building. 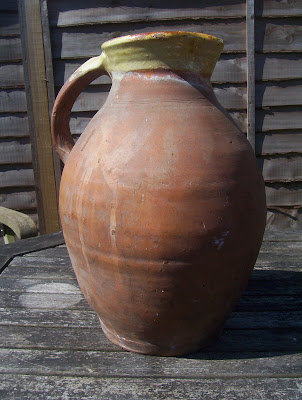 But here is a shot of today's greatest bootsale bargain - a very fine 19th century pitcher made at the Fishley's pottery in Fremington, North Devon. 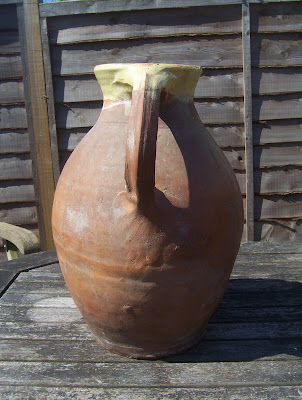 that's quite a stack of work franks done, v nostalgic.. hope you had a lovely break and back to construction for your your pottery eh.. looking good dougstar, is that your wood shed the slatted timber looking building in the background?, i know i'll google earth you.... it so hard to get ya bearings from over here... heheh

well that didn't help much, very fuzzy and 2 possible locations, did you get street view yet? its pretty funny..

Doug I don't watch much telly either, but I do watch Doc Martin it's good fun and port Issac looks great. Frank seems like a lovely chap and that jug just looks amazing I notice you dont say how much you paid for it. does Hil know youve got it?
or as my mum used to say to my dad when she wore a new dress, "Oh this old thing, I've had it for ages"

and I see Exeter WON again at the weekend. Happy days

The signwriting looks excellent.
I have a Fremington pitcher the same as that one but in not such good condition.
It's great that Exeter city seem to be doing well again. Winning a football match eh? Now that would be nice, I can't remember the last one we won.

a gorgeous pitcher and what a lovely little village harbor!

The things you find out on blogs! Loved Doc Martin but the town even more so - Port Isaac is such a beautiful location - now I will wait for the next series and look out for Frank's signs.