I've been having a bit of a struggle to get back in to making lately. I was exhausted after all the crazy hours of hard work leading up to the show and wound up feeling somewhat burned out and lacking inspiration. I don't know why, the show was great and I came home full of enthusiasm, but it's been difficult to get started again.
Yesterday I unplugged the phone and turned up the rock and roll and got stuck in to making some big fat jugs. I'm going to do the same again today. I'll post some pictures later. 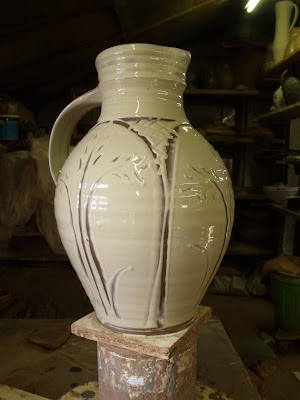 These 8lb jugs have been under polythene for a couple of weeks, waiting for a coat of slip, which they were given yesterday. 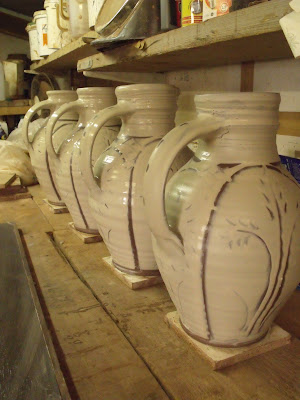 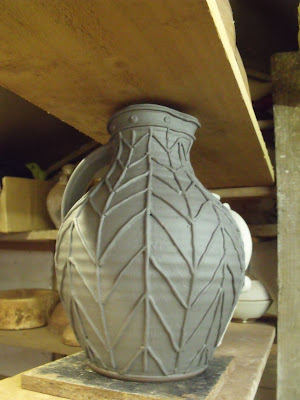 This leafy jug has a green slip. 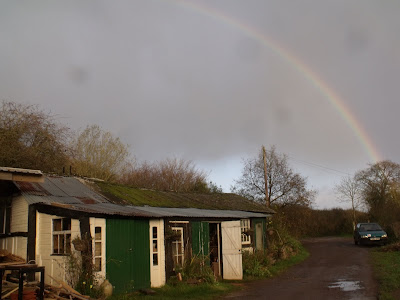 Winter is upon us now, although down here in the softy South West, we've had very few frosts, just lots of rain with sunny bits and the resulting rainbows.
Well I must get to work, back soon
Bye for now
Posted by doug Fitch at 09:13

They are looking almost good enough to eat...

I mean they are looking good.

I know what you mean and they are tasty looking!
BITE?

lovin the slippety slop!!! my first aussie slipware pots are in the kiln Anna fired them today...can't wait to see how they turn out and hope they're not all brown :P

Bet its the rock and roll that got you moving again eh? Lovely!

Excellent offerings to fanatics - a perfect christmas present...now have 4 jugs - missed the sgraffito jug at Thoresby but have a tankard...so good, and to be valued as wonderful and usable..Thanks for the chance to buy..

Glad you are back in the swing of things. Your slipwork is just incredible. My daughter lives in London. I am going to try to direct her your way to purchase a jug or two.