A week until firing time 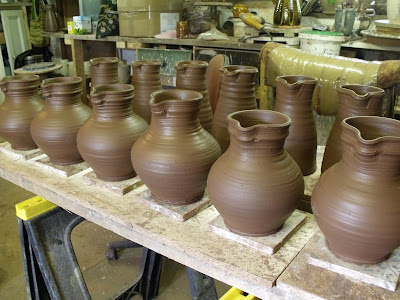 Some short and fat, some tall and thin 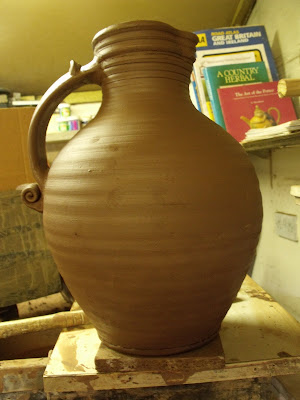 An 8lb jug with scroll handle 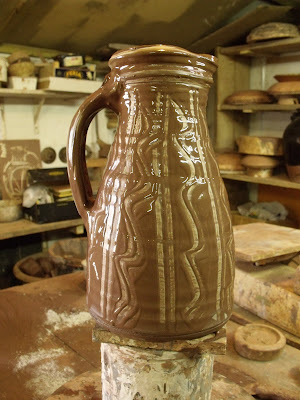 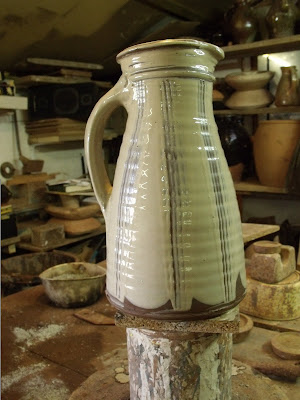 The bricks arrived today for the chimney, so Different Dave's coming up tomorrow to help build it.

Luke won a pair of tickets this evening, to go and see his favourite band, The Libertines in London tomorrow night. I saw them first time around a few years ago when they were supporting the Sex Pistols. I wish I had time to go to London with him and Joe and Hil - I could take a peek at the new ceramics gallery in the V&A for one thing, but I just can't afford the time off, so Hil's going to have to take them on her own poor thing - at least she doesn't have to get dragged around the V&A, so I'm guessing she's not entirely disappointed.

Apart from chimney building, I'm making the last few pots tomorrow, for next week's firing. This time next week, the kiln will be packed and pre-heating ready for firing a week tomorrow. Lots to do before then, busy times ahead.
Posted by doug Fitch at 22:48

Glad to hear you'll be topping up the chimney before the firing. Good luck getting ready. London sounds fun, wish I were there for a show or something exciting. Or out in Devon firing a kiln maybe. :-)

Darn- someone has to be the grown up and stay home and work.... Looks like a good load coming up.

Love that big round jug, mmm. Hope all goes to plan with the kiln preparations and that it will be a good firing. Away up to Cheshire and Shropshire tomorrow for a few days, bet the rain follows us up there!

I love the 8 lb jug- it would stand alone as it is with no decoration!!

Yes, wish you were here too Ron, I look forward to you seeing the place next time you come, it's changed so much. You too Ang.

I sometimes wish I didn't have to decorate, it stresses me right out!

You don't HAVE to decorate.
Sometimes just slip inside and the neck (or even just the neck and just a bit inside) is enough.
I have a small milk jug made by Adrian Childs when he ran Ffestiniog Pottery, and some much older jugs (possibly from Somerset)slipped in this way.