My word it's been a long time since I last posted on here, so I thought I'd come home from work early and try to string a post together with some edited highlights from the past few weeks.

We had a fabulous few days in France. I'd been pretty worried about going away, as I knew that I'd have to go straight off to Hatfield and Art in Clay on our return. This meant that everything had to be fired, finished and packed, then delivered by Jeff to Nic's, (who kindly brought my pots to the show with his and Sabine's), all two weeks early and also two weeks before my next 'payday'. Eeeeeek 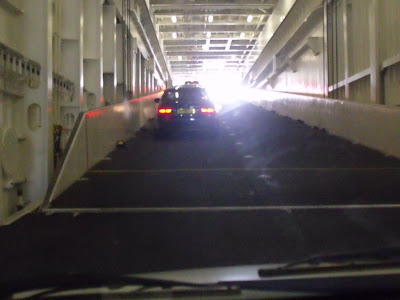 Anyway, all went well and it all happened in time, so off we went, via ferry, from Plymouth to Brittany. 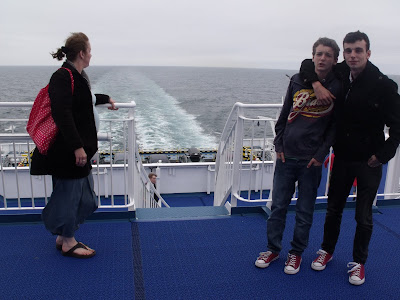 Some jolly mariners up on deck.

I get a bit nervous at first about driving on the 'wrong' side of the road, but after a while settled in. Our roads must seem so congested and busy to the French when they come over here. The roads of France seemed much quieter, there's so much more space over there per head of population. 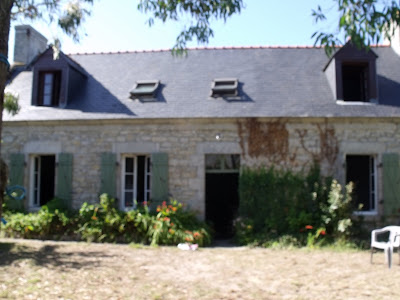 We stayed in a house belonging to a friend and neighbour from the village and met up with our chums Phil and Heather and their two youngsters, who were already out there a few days before us. 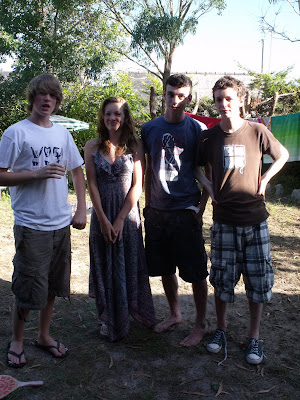 Here's the young 'uns. They've been friends since they were babies and have been through school together, so they got along really well. 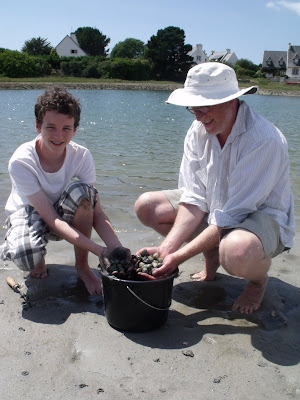 Here's my younger son Joey and Phil, collecting cockles from the beach. 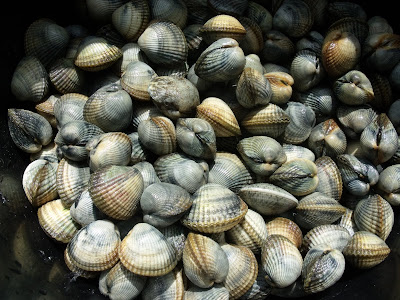 They were really tasty, cooked with wine and garlic. 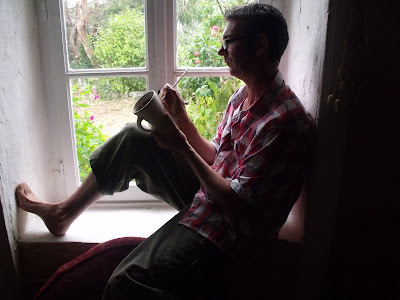 After all my worrying before leaving, it was good to have a break from potting, although I did get started on the sgrafitto decoration of a mug that I made many months ago for Blogger Clay Perry. Poor Clay has been waiting a long time for this cup, which is a swap for a beautiful cane that he sent me ages ago. I made a mug for him before, but chipped it soon after I took it out of the kiln, so this one is its replacement(although I'm sending both). I just couldn't think where to start with the decoration and I wanted to make it a bit special as the cane is so beautifully carved, so it's been sitting on the shelf in my workshop for a few months. I packed it up in a little box and took it with me. I came up with an idea, inspired by a design on a paper copy of an old sampler that was hanging in the kitchen. By the time this mug gets to Clay in the States, it will have been well travelled. I'll post pictures of it once it's finished and fired. 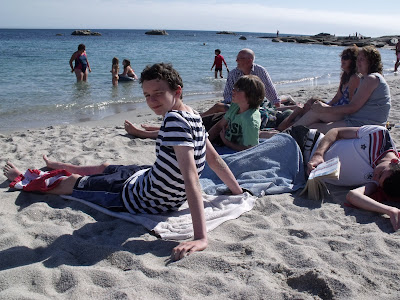 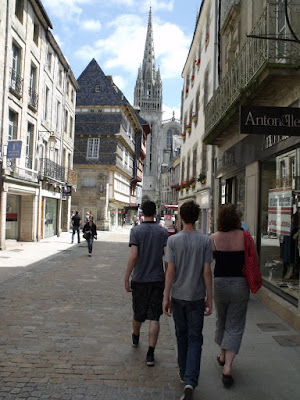 Hil and the boys wandering through Quimper, the nearest city to where we were staying 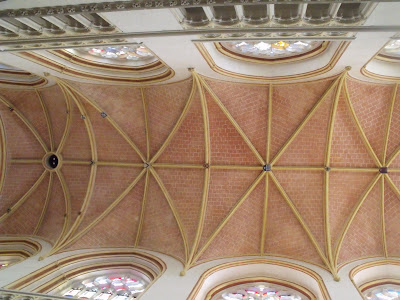 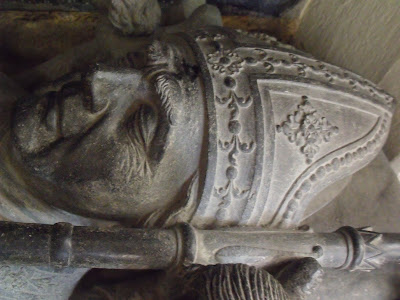 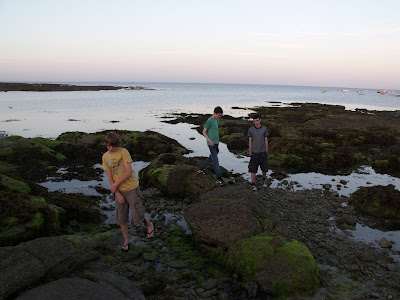 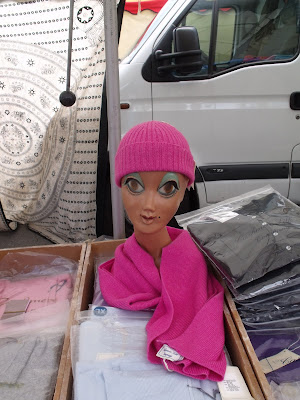 Funny head at the market 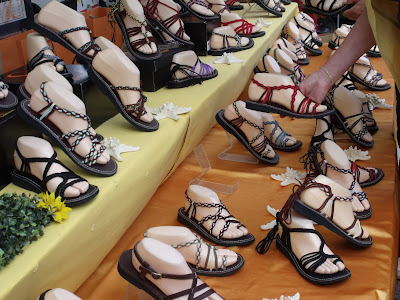 Severed feet at the market 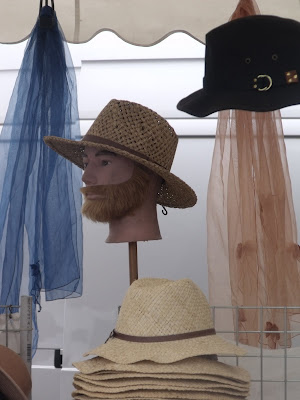 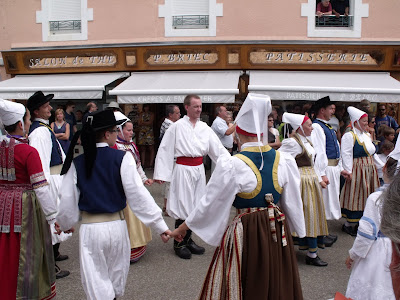 Traditional dancing in the streets of Loctudy 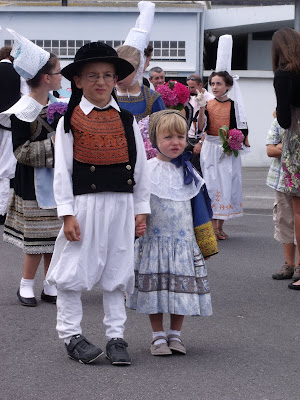 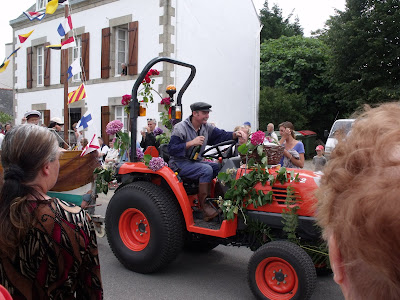 How refreshing to see a street procession that isn't controlled and patrolled by stewards in high visibility jackets. That's how everything seems to be these days in this country. You know what, nobody got hurt! All the more refreshing, the cider that the chap driving the tractor, pulling a boat full of small children, was handing out to on-lookers. 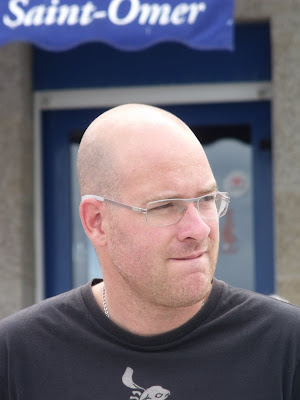 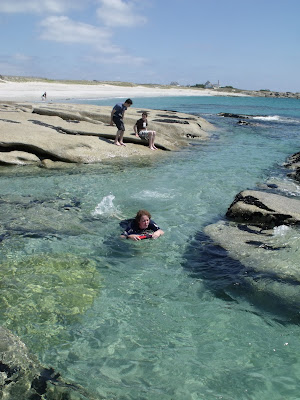 Hil, or a mermaid? 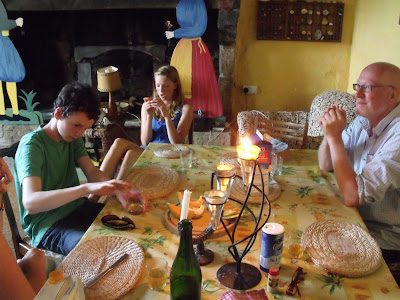 Jess, Joe and Phil in the kitchen 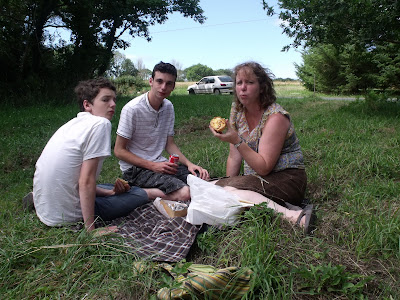 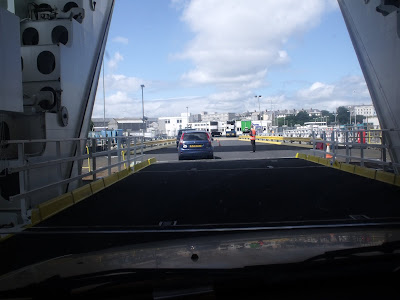 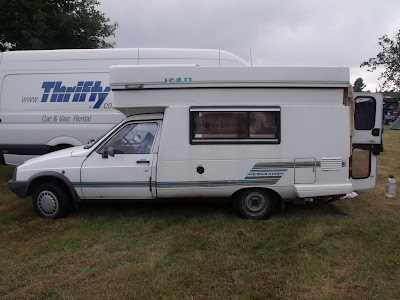 My sister very kindly loaned us her little campervan and it was the envy of many on the campsite, not least because on a number of occasions over the weekend, in between glorious sunshine, the rain was torrential. It was good to have a proper, comfortable bed for my old bones, instead of an inflatable in a tent that we're accustomed to at Hatfiled. I had my Hatfield migraine attack on the Saturday, just like last year. No Ron and Sarah Philbeck this year though sadly. 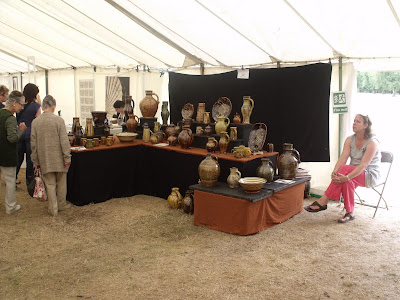 A lot of pots went to new homes at the weekend, thank you to everybody who bought them and thank you too, to all the interesting people who took the time to stop and chat. I even met somebody who follows this blog from Argentina. 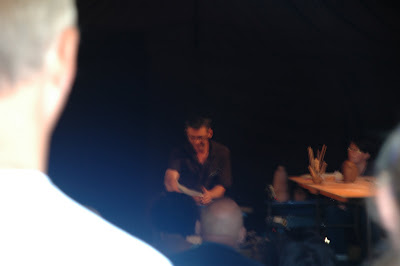 And finally, here's a picture of me doing my demo on the Sunday morning. Thanks James for the pic. The marquee was almost full with a crowd outside the doorway and in the audience, my parents and my boys - no pressure then!

A puzzle jug thrown, blasted with a gas burner and assembled in 45 mins, then a screening of Hollyford Harvest.

Well I reckon that'll do for now. I'm back at work and getting the place sorted out ready for full-scale production, starting on Monday, so muddy pots to follow shortly.

Was great to see you and Hil at the weekend Doug. Sorry for the REALLY AWFUL photo of you doing the demo. We arrived 5 mins too late and there was SO MUCH interest. Did you sign autographs after? It was five ft deep outside the door - and I was at the back! Next time I will arrive in good time and get a decent view point!
Great to see your pots too and to hear you had a good show.

Hi Doug
Looks like you had a great time in France - those pix certainly make me want to go back to beautiful Brittany! So you packed 'em in the aisles & beyond at Hatfield eh, good stuff. Lucky WPA members will get front row positions in October, hee hee.
Cheers for now
Karen

That's a great vacation review, Doug. I have spent a few days in that part of France and do love it. Would like to go back. And I'll bet those cockles were great.

Welcome home--to the blog, that is! You've been missed but it looks like you had a grand old time! I am happy for you.
Your pots looked great--as did your lovely wife!
Good to have you back on line. Fondly, Gay

well brilliant lil travel log, its great to see some lovely sunshine!! hope the post migr recovery is well and truly done and now back to the red stuff!! :))

Fantastic looking trip! Glad it went well, can't wait to see what creations you come up with next.
Happy Mudding!

Great and Nice to have you back in the land of blog.
according to my mobile phone it's your birthday today ?