Well not exactly what we had planned for the Bank Holiday weekend. 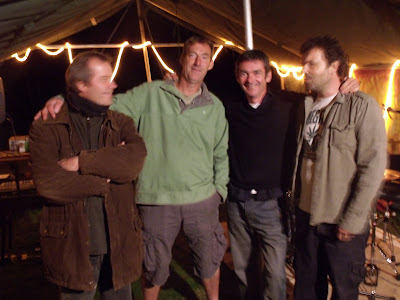 It started well, with the first Love Daddies gig in a year at Nic's party. I can't believe it's a whole year since we played live - we've got two more gigs coming up in the next few weeks. 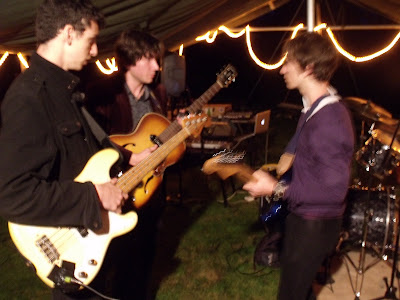 Luke's new band The Fritz played before us. 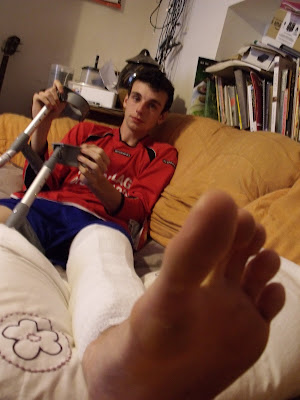 Sunday afternoon was spent in Accident &Emergency, after Luke dislocated his kneecap playing football. The poor kid, It a was horrible sight, his kneecap was on the side of his leg - yeuch. It was all very upsetting for him and for us, it's horrible seeing your child suffering. The ambulancemen put it back in place after a good dose of morphine, before trundling him off to hospital, where he was X Rayed, then plastered from his groin to his ankle. He's going to be like it for six weeks. It's not giving him much pain thankfully and he's already had a string of visitors and pretty girls baking him cakes!

Here he is shortly after we got him home from hospital poor lad, still wearing his footy kit. He was most upset, because the team was winning for the first time in two years, before the match was abandoned. 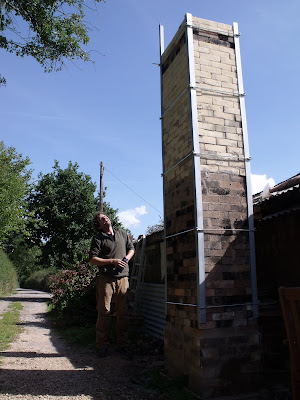 Yesterday I was back in work, sieving glazes and glazing pots in readiness for next week's firing. A potter friend, Tilly Young, came by to bring some pots to put in the firing. I have a show with Tilly and a number of other local potters, later in the year - more about that nearer the date.

Today, Different Dave came by with his kiddies and fitted the metalwork to the chimney. It really looks the business now. I'm looking forward to seeing how it affects the performance of the kiln, I think it'll improve things no end.

I'm going to make a few more pots tomorrow - I got my dates confused and thought I was firing this week, but in fact it's scheduled for Wednesday next week, when Alex will be coming down. It buys me a little more time to make some last minute pots - hurrah!
Posted by doug Fitch at 20:49

Poor Luke - hope he's feeling better/painfree enough to enjoy all the cake and attention! Know what you mean about hating to see your kid suffering, it's a complete killer.

We've just come back from Shrewsbury folk festival - brilliant music and atmosphere, bit like one of the LD gigs I guess!!

I agree, Poor Luke! My husband badly broke and dislocated an ankle a couple of years ago. The whole process is just awful. Glad you have some extra potting time though!

Total bummer for Luke but the cakes sound lovely... :P
Indeed a whole extra week! get to it chap.. and what a superb chimney that's the business alright..cheers

Hey the chimney looks super. What a professional job there! Glad you've got a bit more time before the firing, whatcha gonna make??
I figured Luke would get some nice attention from the girls. Tell him to enjoy it for the next 6 weeks and to make the most of it he can. Ha,ha.

OUUUCCHH for sure! so sad..especially when his team was winning!..sending healing vibes from Alberta.
Great progess on the chimney and good luck on the firing.

I was looking at the picture, and thinking God Doug has changed, then I noticed it's not you in the green top. Chimney looks a blinder I bet your wondering why you didn't do that years ago !.
Say Hi to Luke, made me queezy just reading about it. still plenty of time for guitar practice. and song writing Luke.
"Smells like teen spirit to me"

Sorry about Luke, that must have been an awful fright for you all! Hope he is soon on the mend.

Best of luck with the firing.

Good to see that Love Daddies are not quite dormant!